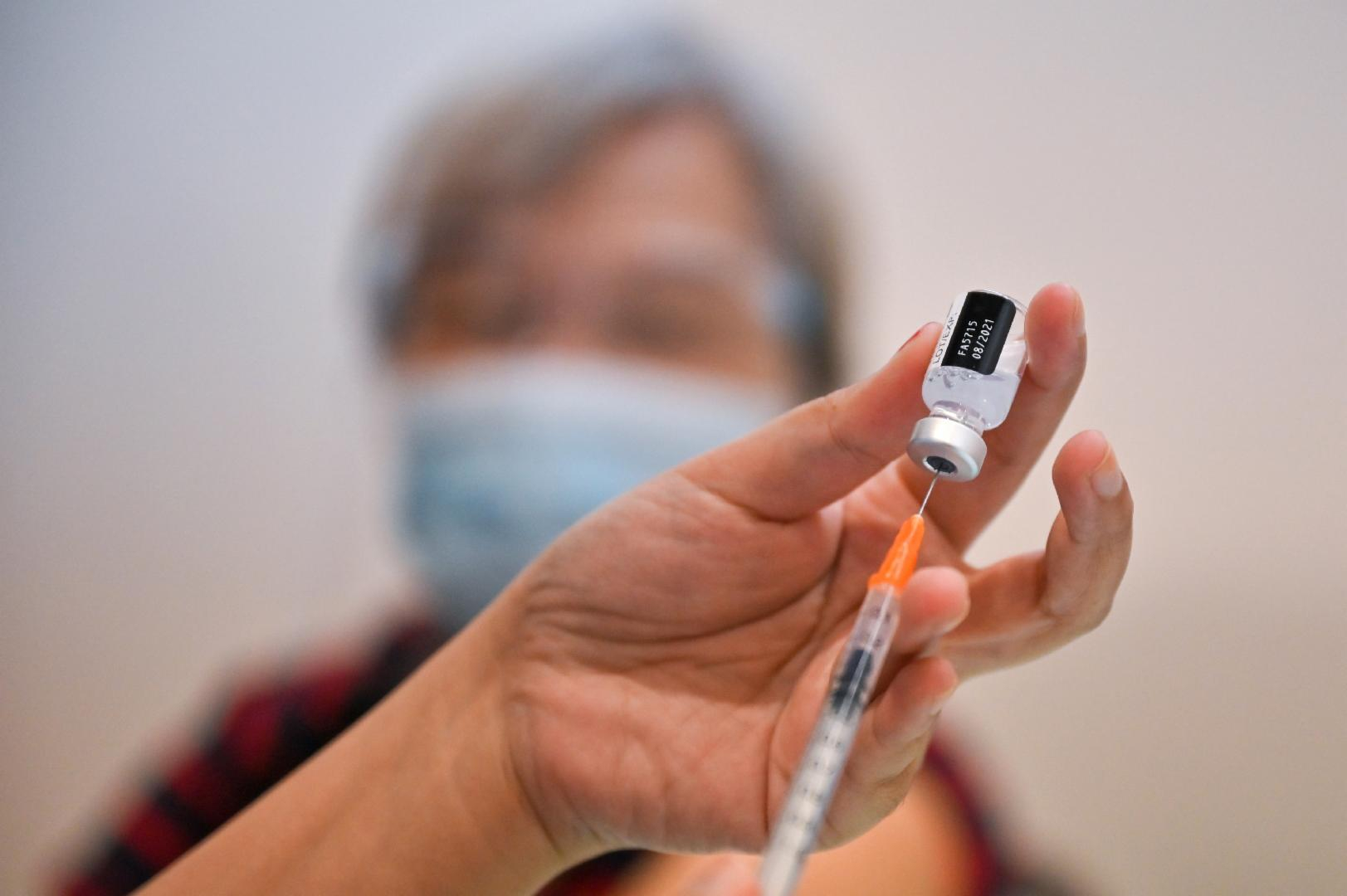 A medical staff prepares to administer a dose of the Pfizer/BioNTech Covid-19 coronavirus vaccine during the first mega Covid-19 vaccination in Kuala Lumpur on May 31, 2021. ( AFP / Mohd RASFAN)

Facebook users in Singapore and Malaysia have shared a purported Chinese-language news article about a disputed scientific paper that falsely claims mRNA Covid-19 vaccines "damage humans' natural immunity". Health experts told AFP there is no evidence to support the claim that mRNA vaccines are harmful. Immunologists, oncologists and other bioscientists said the paper contained "profound misinterpretations of topics and conclusions about the negative impact" of vaccination on immunity.

The Chinese-language news article was shared as a screenshot on Facebook here by a Singapore-based user on September 5, 2022.

At first glance, it appears to have been taken from the September 3, 2022 edition of Shin Min Daily News, a Singaporean afternoon newspaper.

The article's headline reads: "mRNA vaccines spark debate again; [prompts] fears it will cause natural immunity to lose effect." The story also includes a picture of a child wincing as they receive a jab in their arm.

"Research from the Massachusetts Institute of Technology (MIT) has discovered mRNA vaccines harm humans' natural immunity. This means that the human body's protection is largely decreased, weakening the strongest weapons humans have against diseases," the first paragraph of the purported report states.

Messenger RNA (mRNA) vaccines, like the Covid-19 vaccines developed by Pfizer and BioNTech and the shots produced by Moderna, work by giving human cells the instructions to make a surface protein of the coronavirus, which simulates an infection and trains the immune system for when it encounters the real virus.

The news report is based on a paper published in the June 2022 issue of the journal, Food and Chemical Toxicology, which is titled "Innate immune suppression by SARS-CoV-2 mRNA vaccinations: The role of G-quadruplexes, exosomes, and MicroRNAs". The same image was shared in Singapore on Facebook and Telegram alongside a similar claim, as well as on Facebook by users in Malaysia and Taiwan.

A keyword search on the Shin Min Daily News website did not find any articles that matched the report pictured in the false posts, but a record of the newspaper article was archived here by PressReader.

Further keyword searches on Google found the headline and text in the report correspond to an article published by Sing Tao Daily, a Hong Kong newspaper, and its Canadian counterpart.

A similar report was also published by a Taiwanese news platform, all based on the paper published in Food and Chemical Toxicology.

Multiple experts have disputed the paper's conclusions and called for it to be retracted.

The paper, presented as a summation of "current literature on mRNA and its effects on the molecular biology within human cells", references a number of other scientific papers that have not yet been peer-reviewed.

It claims the mRNA Covid-19 vaccines promote sustained production of toxic spike proteins, which in turn impairs the body’s ability to repair itself and could "potentially cause increased risk to infectious diseases and cancer".

But health experts at Meedan, an organisation that tackles health misinformation, told AFP on October 21: "There is no scientific evidence available that suggests that spike proteins created in our bodies from the Covid-19 vaccines are toxic or damaging."

"The Covid-19 vaccines, however, are relatively new. As a result, long-term side effects and reasoning for any side effects are not yet fully known. The vaccines are still being monitored for any safety concerns or patterns being seen that can risk human well-being."

It added to AFP via email on October 22, 2022 that the study "is not a study that was carried out systematically and should not be used to make scientific extrapolations or policy decisions".

A number of experts have asked for the paper to be retracted due to what they claim are misinterpretations by the paper's authors.

A letter to the editor of the Food and Chemical Toxicology journal reads: "We suggest that the article be retracted since a careful analysis of the provided bibliography indicates profound misinterpretations of topics and conclusions about the negative impact that vaccination against SARS-CoV-2 could have on immunity."

The letter adds: "The authors rely on hypothetical physiological disturbances induced by vaccination. For example, they suggest a possible increased risk of various cancers which has never been published so far, whereas for patients with cancer, vaccination is still highly recommended.

"No causal relationship can be established between the described biological mechanisms and the alleged effects of mRNA vaccines in this article."

Dear friends
Let me tell you about a recent editorial experience hard to believe: the editorial scandal of the anti-VAX article by Seneff et al. published in Food and Toxical Toxicology (IF 6) (@elsevier), refused to be retracted by EIC JL Domingohttps://t.co/GFhUmC5H33

The same experts wrote an article here -- which was published in the Stem Cell Reviews and Reports journal on October 26 -- further explaining why the disputed paper is problematic and should be retracted.

The journal that published the study was also criticised for publishing the paper by members of the scientific community here, here and here.

The lead author of the disputed paper is Stephanie Seneff, a senior research scientist at the MIT Computer Science and Artificial Intelligence Laboratory.

Also listed as an author is Peter McCullough, a cardiologist from the US state of Texas who has made other misleading claims about Covid-19 vaccines debunked by AFP here, here, here, here and here.