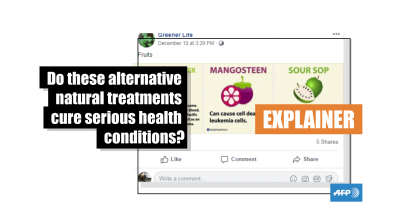 Published on Tuesday 14 January 2020 at 06:20
An old claim is recirculating on Facebook in a post which asserts that two fruits – mangosteen and soursop – can cure cancer and that coconut water can be used as an emergency substitute for plasma. These claims are misleading; scientists say there is not enough reliable evidence to show that mangosteen and soursop are effective cancer remedies and doctors maintain that coconut water is not identical to human plasma and therefore should not be used as an alternative.
Read more Health experts say mixing cough syrup with milk is not fatal, but also not advised

Published on Wednesday 8 January 2020 at 04:20
A story claiming four children have died after being given a “poisonous” mix of cough syrup and milk by their mother has been shared hundreds of times in multiple Facebook posts. This claim is misleading; health experts told AFP taking cough syrup with milk does not make it poisonous, but is also not encouraged, as thickening the medication can cause discomfort and affect its absorption.
Read more 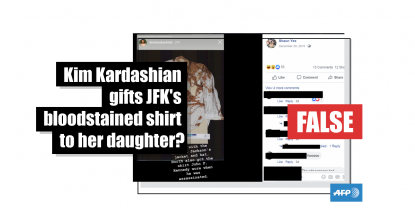 The US National Archives says it has preserved John F. Kennedy’s shirt -- Kardashian refuted the claim that she acquired it

Published on Tuesday 7 January 2020 at 10:15
An image of President John F. Kennedy’s bloodstained assassination shirt has been shared repeatedly on Facebook, Twitter and Reddit alongside a claim that US socialite Kim Kardashian gifted it to her daughter, North West. The image purports to show a screenshot of an Instagram Story on Kardashian’s official account. The claim is false;  the US National Archives states on its website that the clothing Kennedy wore when he was murdered remains preserved in its archives; Kardashian has publicly refuted the claim as a “sick joke”, stating on Twitter that the purported screenshot from her Instagram story was “obviously fake”.
Read more 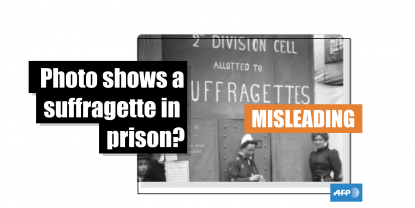 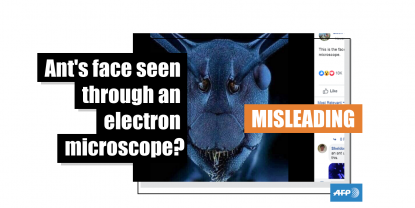 Published on Wednesday 1 January 2020 at 09:55
A photo has been shared tens of thousands of times in multiple posts on Facebook and Twitter alongside a claim that it shows an ant's face seen through an electron microscope. The claim is misleading; the photographer told AFP the photo was taken using a macrophotography technique, not using an electron microscope.
Read more