A composite image showing World Economic Forum (WEF) founder Klaus Schwab and a man in military uniform is circulating in social media posts claiming it shows his father, who was purportedly a high-ranking Nazi close to Adolf Hitler. However, the man in military uniform is a German major general called Walther Dybilasz, not Eugen Schwab. Historians say there is no evidence that Eugen Schwab was a high-ranking Nazi.

A composite image of two men, one in military uniform, was shared in a Singapore-based Telegram group here on May 27, 2022.

"On the right is his father, industrialist and fascist Eugen Schwab, who was close to Hitler.

"Klaus was born in Nazi Germany in 1938. At the time, his father ran the strategic company 'Escher-Wyss' and ran his own concentration camp, where prisoners had to work for free. The income from this company gave Klaus Schwab a comfortable existence.” 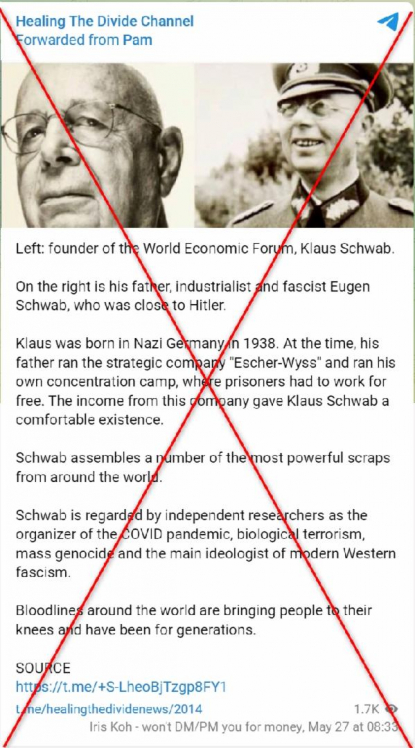 Screenshot of the misleading Telegram post taken on June 28, 2022

Klaus Schwab is the founder and executive chairman of the World Economic Forum (WEF), famed for its annual meeting of global business, government and civil society leaders in Davos, Switzerland.

According to German-language book "Gastgeber der Maechtigen" (Host of the Powerful), Klaus Schwab was born in 1938 in Ravensburg, in southern Germany, where his father ran a factory for Swiss engineering company Escher Wyss.

The same composite image was shared alongside a similar claim in other Telegram groups here and here, and other social media platforms, such as Facebook and Reddit.

It also circulated in various other languages, including German, French, Greek, Spanish and Norwegian.

A reverse image search found the photo of the man in military uniform on various blogs and discussion boards about the Wehrmacht, the armed forces of the Third Reich, which identify the man as "Major General Walther Dybilasz", also spelled "Walter Dybilasz".

A photo of Dybilasz published in documents from the military archives division of the German Federal Archives show a close resemblance to the man in the photo shared in a false context online.

Screenshot of Walther Dybilasz's photo on the German Federal Archives

Below is a comparison of the photo in the misleading post (left) and the photo from the German Federal Archives (right): 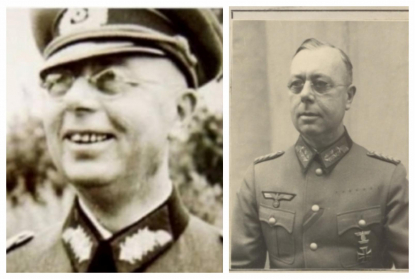 According to the German Federal Archives and an online biography,  Dybilasz was born in 1892 in Altona, now part of the northern German city of Hamburg.

At the end of World War II, Dybilasz was taken prisoner by the Americans and handed over to the Soviet forces. Sentenced to 25 years' hard labour for war crimes, he died in 1950 in a prison in Stalino in the Soviet Union, now known as Donetsk, in today's eastern Ukraine.

A picture of Eugen Schwab, who was born in Switzerland in 1899, is available on the Family Search site, which features an image of a temporary visa he held for Brazil, dating from 1960.

A spokesperson for Klaus Schwab told German fact-checking organisation DPA that the photo on the Family Search site shows his father, Eugen Schwab.

Below is a screenshot comparison of Eugen Schwab's photo (left) and Dybilasz's pictures (right):

Contacted by AFP, a WEF spokesperson said the photo circulating on social media did not show Eugen Schwab.

He said that the appendix of Klaus Schwab's German-language book, "Gastgeber der Maechtigen", contains a photo of Eugen Schwab, showing it is "the same person" as the one from the Family Search site.

He dismissed the claim that Eugen Schwab was a Nazi as "absolutely wrong and a slander to Klaus Schwab's family".

"Denazification" was the Allied forces' programme in Germany and Austria that eradicated the countries from Nazism after World War II, in which many people faced interrogations to find out whether they were part of a Nazi organisation.

Niels Weise, a researcher at the Institute of Contemporary History (IfZ) in Munich, said the files did not show that Eugen Schwab was a Nazi and that no conclusions about his political beliefs can be drawn from the documents.

"He was not even a member of the Nazi party (NSDAP)," he said.

"Eugen Schwab did not hold any position in the NSDAP and was clearly not a high-ranking Nazi."

"There is no indication that Schwab had any particular or even any relationship with Hitler," he added.

Peter Faessler, a professor of modern history at the University of Paderborn in Germany, said: "The denazification files do not show that Eugen Schwab was a high-ranking National Socialist", or Nazi.

He said that no conclusions about the elder Schwab's political views could be drawn from the files.

The denazification files show that Eugen Schwab had to answer two questionnaires in 1946: one in February 1946 as "the commercial manager of the Escher Wyss factory" and the other in November 1946 as an "advisor of the Ravensburg Chamber of Commerce".

According to the documents, Eugen Schwab was classified into the exonerated group, which "corresponds to an acquittal," Weise said.

Escher Wyss, like other companies, used forced and foreign labourers from a Nazi camp, said Silke Schoettle, the head of Ravensburg City Archives, referring to this book.

"It seemed that the use of forced labour at Escher Wyss was guaranteed," Faessler said

Even if Escher Wyss was apparently "part of the inhumane use of forced labour in the Nazi war economy", Weise said, this "certainly could not be attributed to a special relationship between the commercial manager and Hitler".

He concluded: "Eugen Schwab did not have his own concentration camp."

Klaus Schwab has been a target of false claims before, which have been debunked by AFP here and here.