A screenshot shared thousands of times in social media posts purports to show a tweet from the World Economic Forum (WEF), a Geneva-based international lobbying organisation, questioning whether the age of consent "should be lowered to 13 or less". Some social media users appeared to believe the tweet was genuine. But a keyword search of the WEF's tweets found no record of the purported tweet as of March 18, 2022. A WEF spokesperson told AFP the purported tweet was "false" and that it had not made the alleged recommendation.

"Should the age of consent be lowered to 13 or less? How age of consent laws may be infringing on human rights @UNICEF https://wef.ch/tty56dX", reads the tweet in the screenshot. 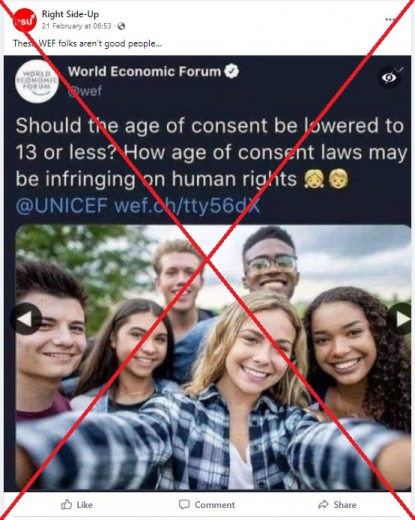 The screenshot was also shared thousands of times alongside a similar claim on Instagram here and in Facebook posts here and here; and here on Twitter.

Responses from some social media users on the misleading posts suggested they believed the screenshot showed a genuine tweet from the WEF.

Another comment reads: "Part of their plan. If they can sexualize kids earlier, [separate] them from connection with parents, structure, religion, then they can more easily shape them for the 'great reset' that they want."

In an article about child marriage published on its website in 2015, WEF founder Graca Machel wrote that governments worldwide should "adopt legislation that sets 18 as the minimum age for marriage".

However, AFP found no record that it had issued specific advice about the age of consent.

The WEF said the purported tweet shared in the misleading posts had been fabricated.

"This is categorically false and a blatant attempt by malicious actors to propagate fake news," a WEF spokesperson told AFP.

The link included in the purported WEF tweet also does not lead to any active webpage, nor does an archive of the page here.

A search of tweets posted from the WEF account of the terms "age of consent" did not reveal any matching tweets.

A Google reverse image search of the screenshot in the misleading posts found it has previously circulated on websites that share satirical content, including here on a website called iFunny.

AFP examined Twitter discussions about the false tweet and found users commenting that it was created as a "parody".