An image that purports to show Canada Deputy Prime Minister Chrystia Freeland and another politician at the Pride Toronto celebration is circulating on social media. But the photo is altered; the Twitter user that first shared the image said it was doctored to make it look like the Liberal Party politicians posed with a naked man.

"Invite the kids!" says a June 28, 2022 tweet that includes an image of Freeland and another politician appearing to pose with a naked man during Pride Toronto. The tweet tagged Freeland and Ontario MP Patty Hajdu. 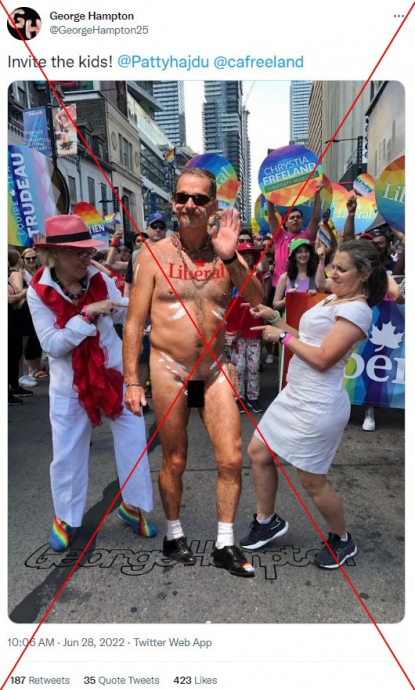 But the image is altered. The Twitter user that shared the photo, George Hampton, admitted it was not authentic.

On June 29, Hampton also tweeted: "I don't photoshop images to fool or mislead people, just to ridicule politicians etc for a laugh."

However, replies to the original post indicate some people took the image seriously.

Responses to the tweet also pointed out that the second woman in the image is Carolyn Bennett, Canada's minister of mental health and addictions -- not Hajdu.

On June 26, 2022, the Toronto MP shared the photo of herself with Freeland on Twitter. The image does not show a naked man. 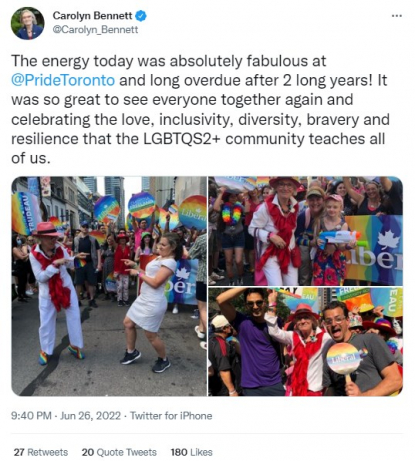 Another altered version of the image shows Freeland wearing a pink sex toy.

"If you don't mind, George, can I join the Photoshop extravaganza too?" said a Twitter user in a June 28 response to Hampton's original post.

AFP has debunked other claims about Canada here.