A photo showing veteran politician Raila Odinga being attended to by medical staff has been shared on Facebook in Kenya alongside a claim that it was taken when he recently collapsed in his residence. But the context is misleading: the picture dates back to 2017 when he was hospitalised with suspected food poisoning.

The image was published on Facebook on June 10, 2022, and has since been shared more than 60 times. 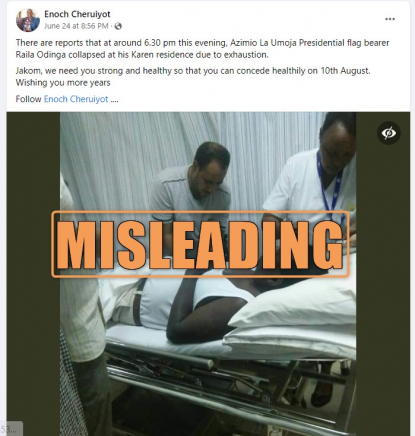 “There are reports that at around 6.30 pm this evening, Azimio la Umoja Presidential flag bearer Raila Odinga collapsed at his Karen residence due to exhaustion,” reads a section of the post.

Odinga, who is running for president under the Azimio la Umoja One Kenya coalition, will face Deputy President William Ruto of the Kenya Kwanza alliance and two other candidates in the national election on August 9, 2022.

The contest is shaping up to be a two-horse race between Ruto and 77-year-old Odinga, who has the backing of President Uhuru Kenyatta.

But the photo doesn’t show Odinga following a recent collapse owing to exhaustion.

A reverse image search conducted by AFP Fact Check found that the photo has been used out of context.

The image was previously published (here, here and here) when Odinga was hospitalised in 2017 for suspected food poisoning following a series of rallies on Kenya’s coast.

At the time, Odinga was contesting the presidency under the National Super Alliance (NASA) and faced off against Kenyatta.

“The photo is from 2017 when our party leader was taken to hospital as he was campaigning in the coastal region. Raila is well and has been on the campaign trail for the whole of June 2022,” Onyango said.