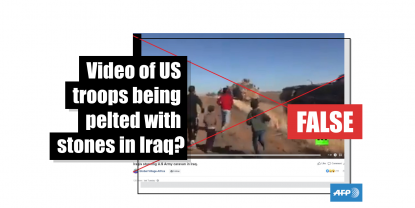 Published on Monday 20 January 2020 at 15:58
A video viewed thousands of times has been shared in multiple Facebook posts alongside claims that the footage shows US troops being pelted with stones in Iraq. But this claim is false; the footage was actually filmed in northern Syria and shows protesters attacking a joint Turkish-Russian patrol.
Read more 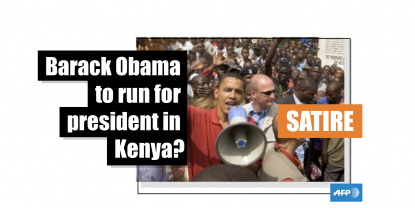 Published on Friday 17 January 2020 at 18:38
A satirical article claiming that former US leader Barack Obama plans to run for president in Kenya - his father’s birth country - has been shared tens of thousands of times, with some users taking the false story at face value. AFP has found no evidence of Obama making such an announcement.
Read more 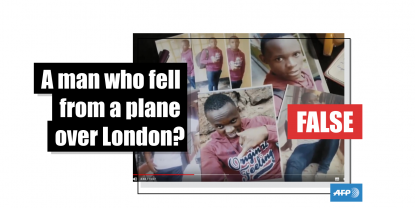 Published on Tuesday 10 December 2019 at 11:12
British TV channel Sky News published photographs showing a Kenyan man they claim plummeted to the ground from a plane flying over London in June, 2019. However, the man in the pictures is alive and in jail. Sky News has withdrawn its report, saying it had been 'founded on misleading information'.
Read more 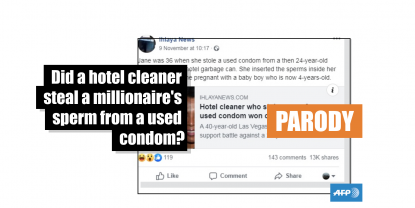 Published on Thursday 14 November 2019 at 10:39
A joke post claiming that a hotel cleaner won a child support battle against a millionaire after stealing his sperm from a used condom has been shared thousands of times in various African countries. But we traced the post to a ‘news parody and satire’ site.
Read more 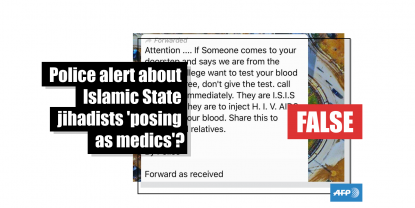 Published on Thursday 7 November 2019 at 14:06
A hoax message claiming that jihadists from the Islamic State group are masquerading as medics offering people free blood tests -- while actually injecting them with the HIV virus -- has been circulating in various countries since 2017. The hoax, which has previously spread everywhere from India and Nepal to Ghana, has re-emerged recently in Kenya alongside a claim that three people were arrested over the plot in the city of Kisumu. However, Kenya police told AFP the security alert was “untrue”. Nepalese and Indian police have previously also warned people that the message was false.
Read more