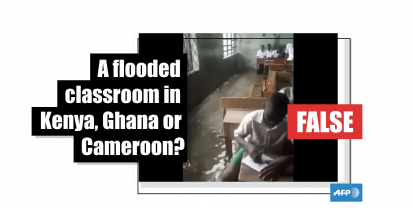 Social media posts have located this flooded classroom in various African countries. It was actually filmed in Nigeria

Published on Thursday 31 October 2019 at 15:07
A video of students seated in a flooded classroom with a dilapidated roof, hardly protecting them from the heavy downpour, has been shared in numerous African countries in social media posts decrying the state of local educational facilities. Some web users claimed the school was in Kenya or Ghana; others in Cameroon, Togo or Tanzania. But a tip-off from comments on a Nigerian celebrity’s Instagram account allowed us to show that the video was actually filmed at a school in Delta State, southern Nigeria.
Read more 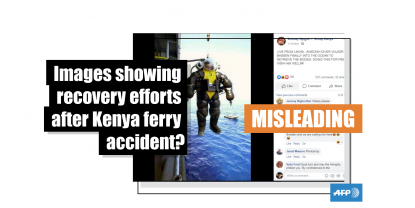 Published on Thursday 24 October 2019 at 18:18Updated on Thursday 24 October 2019 at 18:19
Posts claiming to show scenes from a recovery mission for a passenger vehicle carrying a woman and her child that plunged into the Indian Ocean last month have been shared multiple times on social media. But some of the images purporting to show the accident are old pictures from Kenya and other countries.
Read more 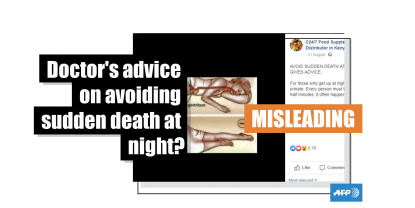 Published on Wednesday 16 October 2019 at 13:32
Posts claiming to share urgent doctor’s advice to stay in bed for three and a half minutes before getting up to avoid sudden death have been shared thousands of times on Facebook. The text, repeated word for word in each post, claims that suddenly rising from bed can provoke heart failure and anaemia of the brain. AFP spoke to a cardiologist in Nairobi who dismissed the claim as untrue with no scientific basis.
Read more 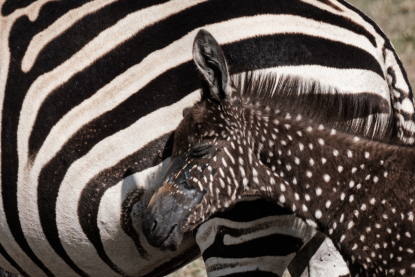 Published on Wednesday 9 October 2019 at 11:05
Numerous social media posts have shared two photos alongside claims that they show a rare polka-dot zebra foal, recently spotted in Kenya’s Maasai Mara National Reserve, being transported for sale abroad. The baby zebra, named Tira, had proved a hit online and claims that she had been sold met with dismay from Kenyan social media users. But an online tip-off and some expert help have allowed us to confirm that these pictures show a different zebra altogether. Kenyan wildlife authorities say rumours of a sale are “completely false”.
Read more 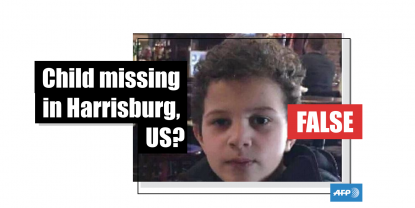 Published on Friday 4 October 2019 at 14:52
A missing child alert urging online users to circulate the message widely is still gaining thousands of shares three years after the boy was found. The alert urges people to help track down a boy claimed to be from Harrisburg, capital of the US state of Pennsylvania, who was apparently kidnapped. However, a reverse image search shows that the boy in the photo is Ariel Revello, a boy who went missing in 2016 in the state of Connecticut, west of Pennsylvania. State police announced that he had been found a day later.
Read more