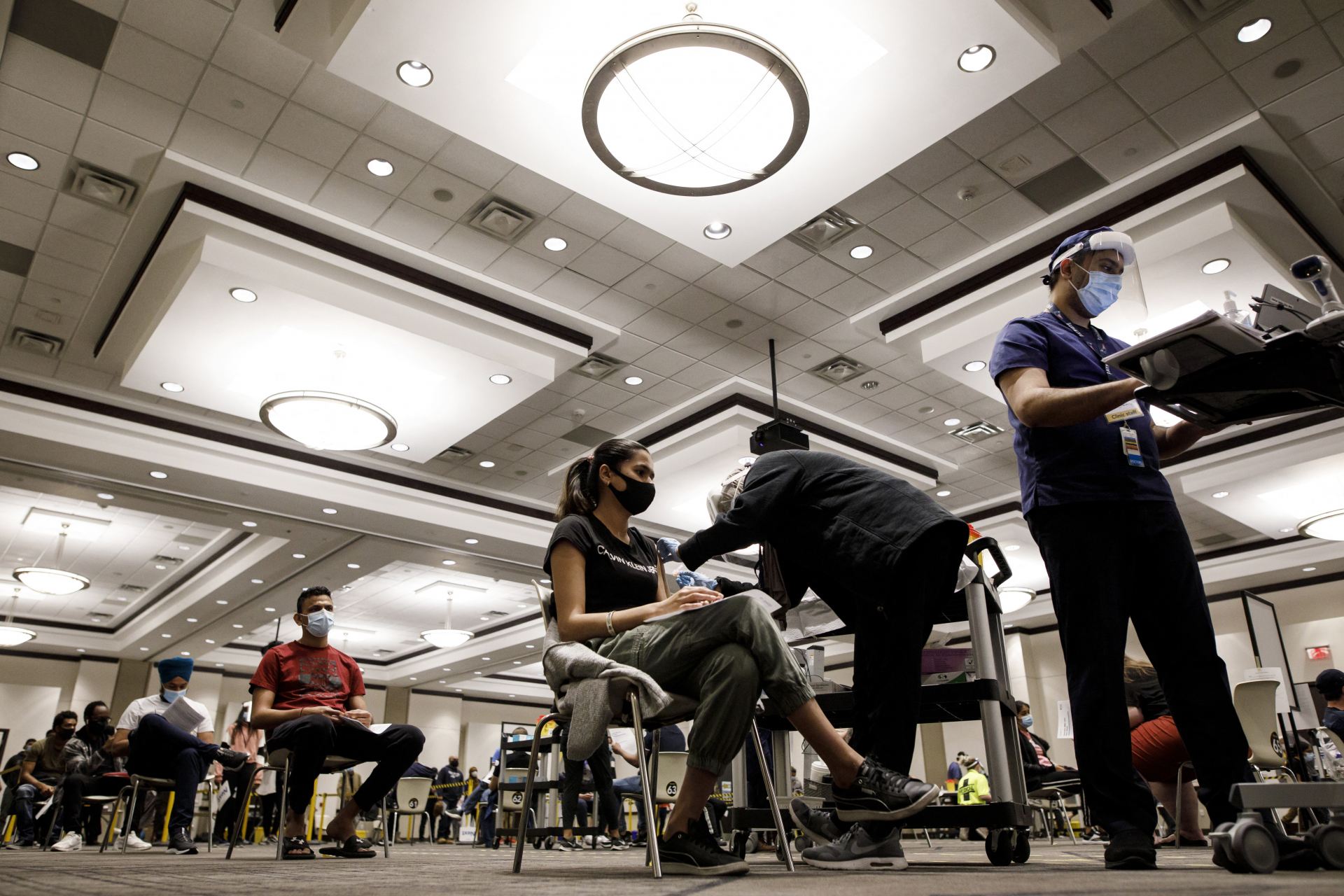 Social media users are sharing a radio interview in which a Canadian immunologist claims that widely used Covid-19 vaccines are dangerous. But a pharmaceutical company document and Harvard study presented by the professor as evidence have been misinterpreted, and experts said the jabs are working safely and effectively as intended.

“The story I’m about to tell is a bit of a scary one. This is cutting-edge science,” says Byram Bridle, an associate professor at the University of Guelph, in a May 27, 2021 radio interview on Global News 980 CFPL. It has been shared more than 22,000 times on Facebook, according to the social media monitoring tool CrowdTangle. 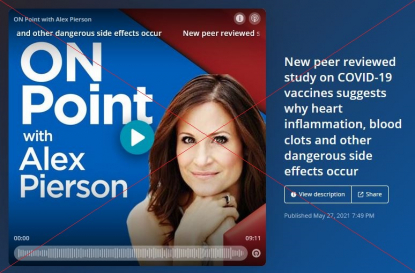 In the segment, Bridle claims studies show that the spike protein from SARS-CoV-2, the virus responsible for Covid-19 disease, is circulating via the bloodstream, supposedly posing a health risk to people who choose to be vaccinated.

The mRNA vaccines developed by Pfizer-BioNTech and Moderna differ from previously administered inoculations. Instead of confronting the immune system with part of a virus in a weakened or deactivated form to build antibodies, they give it a “blueprint” of a part of the virus (the spike protein) that the body can then recognize and fight when confronted by it later.

Bridle warns: “We made a big mistake... We never knew the spike protein itself was a toxin and was a pathogenic protein. So by vaccinating people, we are inadvertently inoculating them with a toxin.”

Experts, including those with Canada’s #ScienceUpFirst initiative, disagree.

The group, which is partially supported by the Canadian government to debunk misinformation about Covid-19 online, wrote a Twitter thread to explain that spike proteins induced by the vaccines are different from those present on the surface of the SARS-CoV-2 virus, and that they are not dangerous.

The Bridle interview was shared throughout the world, leading to misleading claims debunked by AFP in France and Germany.

Contacted by AFP, Bridle did not reply, but he has claimed that he experienced “harassment” from colleagues who do not share his controversial views on the safety of Covid-19 mRNA vaccines.

More than 318 million doses of the Covid-19 vaccines -- mostly mRNA jabs -- have been administered in the United States, and more than 32.5 million shots have been given to Canadians.

AFP has debunked false and misleading claims about the impact of Covid-19 on fertility here and here.

To support his claim, the Canadian professor claims to have gained access to a Pfizer study from Japan. But this document is not new, nor is it a “study,” according to the pharmaceutical company.

Maki Yamaguchi, a Pfizer spokeswoman, told AFP on June 17 that Bridle is referring to a “Common Technical Document,” a standard international format in the approval process for prescription drugs. “The document is part of the data submitted by Pfizer to the (Japanese) Pharmaceuticals and Medical Devices Agency for review,” she said.

These documents had also been evaluated by the European Medicines Agency (EMA) and by its British and American counterparts, which have all authorized this vaccine for emergency use.

In the original report in Japanese, Pfizer studied the circulation of its vaccine by injecting mice with a mixture containing lipid nanoparticles, the small capsules that carry messenger ribonucleic acid (RNA) molecules to cells where they deliver the genetic information that creates the spike protein. These were “radioactively marked” to follow their path in the body of the mice.

The Pfizer document does not prove that the spike protein spreads throughout the body, according to experts. Only the lipid nanoparticles -- and not the spike protein -- circulated, mainly in the muscle where they were injected and in the liver. They were also found, in lower concentrations, in the spleen and ovaries.

Daniel Sauter, research leader of the “Mechanisms of Innate Antiviral Immunity” group at the University of Tübingen, agreed.

He said on June 11: “At no point in the document is the depositing or concentration of spike protein in the experimental animals examined. The methodological approach of the study does not allow this conclusion.”

Frank Kirchhoff, director of the Institute for Molecular Virology at the University Hospital in Ulm, Germany, also said that the presence of lipid nanoparticles in certain organs “does not mean that spike proteins, let alone freely moving spike proteins, are also present there.”

He said on June 11 that “for that to happen… the vaccine would first have to fuse with the cells there, and radioactive labeling alone doesn't show whether that happens.”

What Bridle leaves out in his claims is that, according to the EMA summary, the lipid nanoparticles only accumulate for a certain amount of time and then are broken down by the body. Thus, the highest concentration in blood plasma was reached shortly after administration but fell to only one percent 24 hours later.

According to the EMA summary, the dose of mRNA injection used was also not comparable to the vaccine dose given to humans. It was 300 to 1,000 times higher.

This does not mean that these vaccines are not associated with any side effects. Health authorities in Canada, Europe and the United States are carefully monitoring Covid-19 vaccines for adverse reactions. But both the US Centers for Diseases Control and Prevention (CDC) and Health Canada consider the shots safe and effective. 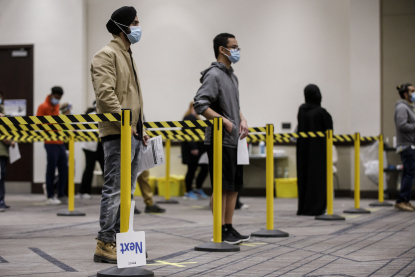 Bridle further claims that a study “found the spike protein in circulation, in the blood of 11 of... 13 health care workers that had received the vaccine,” and that it could pose a risk to the health of vaccinated individuals.

David Walt, who worked on the Harvard University study, said that the Canadian professor “is taking our results and completely misinterpreting them.”

Walt explained that the goal of the research was to collect scientific data on the circulation of antigens, proteins specific to the SARS-CoV-2 that allow the production of antibodies.

In the study, parts of spike proteins were found in the blood plasma of 11 vaccinated people and complete spikes in only three, he said.

The study could not explain why this happened, but it found that the concentration of SARS-CoV-2 proteins progressively decreased while the antibody concentration increased. Partial spikes disappeared from the plasma of all vaccinated individuals after 14 days, and complete spikes observed in the three vaccinated workers were detectable only after the first vaccination and disappeared after the second dose.

These results do not mean that the presence of the spike protein is dangerous, according to Walt.

“Our conclusion was that the vaccine is working as intended,” he added.

Ulm University Hospital’s Kirchhoff confirmed this, saying: “I doubt that the amounts of free spike protein that could potentially occur after vaccination would be sufficient to cause harmful side effects.”

Only very high concentrations of spike protein could cause damage in the body, but this is not the case after vaccination, Christian Münz, professor of viral immunobiology at the University of Zurich in Switzerland, previously told AFP on May 6.

Pfizer’s pre-market phase 3 clinical trials administered 43,448 injections, with half of participants getting the vaccine and the other half a placebo. Serious side effects were rare and equally distributed between the vaccine and placebo groups.

During the interview, Bridle makes other claims without mentioning their scientific basis. Some of them have been previously examined by AFP Fact Check.

Bridle claims, without citing sources, that mRNA from vaccines would be transferred from breastfeeding mothers to infants via breast milk, causing bleeding in the gastrointestinal tract.

AFP previously examined (in German) this claim after the death, reported in May 2021 in the United States, of a baby whose mother had been vaccinated. Experts agreed that the mRNA from the vaccines does not pass into breast milk.

Bridle goes on to claim, without citing sources, that the spike proteins can break through the blood-brain barrier and cause neurological damage. AFP also examined this claim (in French) in May.

Daniel Dunia, head of research at the French National Center for Scientific Research (CNRS), said at the time that “the messenger RNA vaccine is injected locally into the muscle and the expression of the spike protein will be restricted to the cells initially targeted to trigger the immune response. The messenger RNA is unstable and will be rapidly degraded.”

He added: “Even when a person suffers a serious Covid infection, there is no direct evidence of blood-brain barrier damage directly related to the virus.”

Contacted again on June 14, Dunia confirmed in an email that there is currently no scientific basis for the claim that mRNA vaccines cause neurodegenerative diseases.