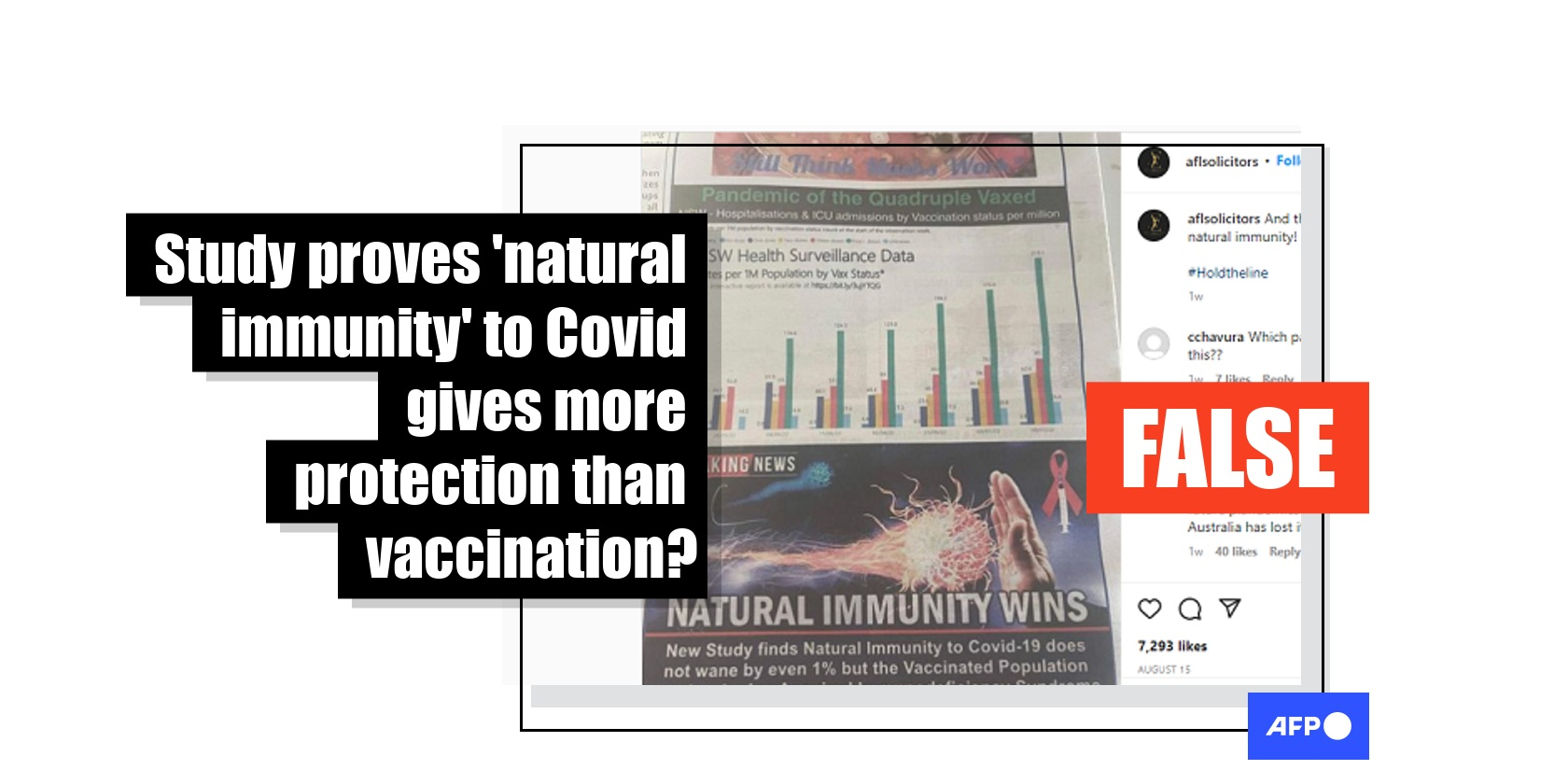 Posts mislead about advantages of natural immunity to Covid, 'dangers' of vaccination

Australian social media users claim a new study proves natural Covid-19 infection provides better protection against the disease than vaccination, citing a graph that appears to show hospital admissions in the state of New South Wales. The posts, shared hundreds of times, go on to say that vaccinated people are developing acquired immunodeficiency syndrome (AIDS). However, the author of the study -- which has not been peer-reviewed -- told AFP it had been "distorted", saying vaccination was still the best protection against the disease. Medical experts have previously told AFP that there is no evidence that Covid-19 vaccines can cause AIDS.

The claim was shared here on Instagram alongside an image of what appears to be a newspaper page.

"And the winner is……natural immunity! #Holdtheline", reads the post's caption.

At the top, the post shows a graph titled "Pandemic of the Quadruple Vaxed". It purports to show that more vaccinated people are being hospitalised than unvaccinated people in New South Wales.

Below this, a graphic reads "Breaking News" and "Natural Immunity Wins".

The text underneath reads: "New Study finds Natural Immunity to Covid-19 does not wane by even 1% but the Vaccinated Population are developing Acquired Immunodeficiency Syndrome".

The graphic also contains a link to an article with the same headline published in The Expose, a website with a history of circulating inaccurate health information debunked by AFP here, here and here. 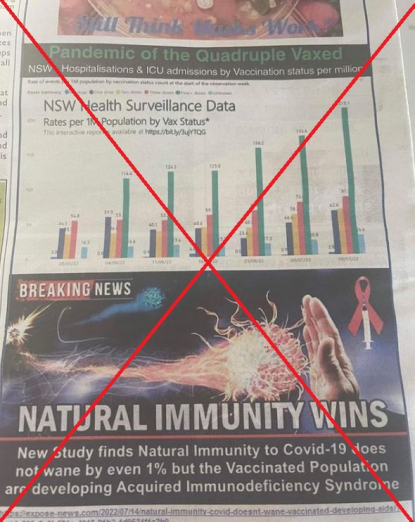 Screenshot of the misleading image, captured on August 19, 2022

The same image was also shared hundreds of times by other Australian social media users here, here and here.

The "new study" referred to in the misleading image is a pre-print study from Qatar that examined the duration of protection against Covid-19 afforded by infection.

The pre-print study is available on medRxiv, a site that distributes unpublished manuscripts about health sciences, which states: "Preprints are preliminary reports of work that have not been certified by peer review. They should not be relied on to guide clinical practice or health-related behavior and should not be reported in news media as established information."

The study's lead author, Hiam Chemaitelly -- an assistant professor at Weill Cornell Medical-Qatar -- told AFP the findings had been "distorted and misinterpreted".

She said a natural Covid-19 infection can have serious health consequences and vaccination is the safest and most effective protection against the virus.

"It is irrational for anyone to expose themselves to infection unvaccinated and not benefiting from vaccine protection," Chemaitelly said.

"Natural infection can cause serious acute disease and even death, and could be followed for years with long Covid symptoms."

Chemaitelly also dismissed the claim her study had found that Covid-19 vaccines cause AIDS, which is caused by human immunodeficiency virus (HIV).

"We did not investigate this in any of our studies, but I am not aware of any published evidence to this end," Chemaitelly said.

AFP has previously debunked the claim that Covid-19 vaccines can cause AIDS.

In response to the claim, Tufts University School of Medicine virologist John Coffin said: "To be blunt, this is fear-mongering based in garbage science at its most heinous."

University of Miami Miller School of Medicine public health professor Olveen Carrasquillo also said the evidence does not support the claim: "My sense is that this is all part of an ongoing disinformation campaign we have seen throughout the epidemic."

While there have been published studies that indicate naturally acquired immunity provides stronger protection against Covid-19 than vaccine-induced immunity, researchers say their studies have several limitations.

An Israeli study published in the Clinical Infectious Diseases journal in April 2022 concluded that natural immunity conferred stronger protection against the Delta variant than two doses of the Pfizer-BioNTech vaccine.

However, the researchers acknowledged their results could not be applied to other variants, or indeed other brands of Covid vaccines.

The researchers also said their study may underestimate asymptomatic infections, as individuals without symptoms may not get tested for the disease.

A Qatari study published by The New England Journal of Medicine in July 2022 also acknowledged their results may not be applicable to other countries with older populations.

And Chemaitelly, who was also involved in this study, said three doses of vaccination "can supersede protection of natural immunity if booster vaccination occurred recently."

AFP found the graph featured in the misleading posts was originally posted by Twitter user @LCHF_Matt, who cited data from the New South Wales government and CovidBaseAU, a community-run site that compiles Covid-19 data in Australia.

Speaking to AFP, Australia's Royal Melbourne Institute of Technology professor Mark Osborn advised the public to question the reliability of data presented by individuals who may not be associated with an established public or research organisation.

He said: "Information and data shared from independent databases and via social media posts may in some cases contain factual errors and/or be subject to a particular political agenda.

"Please proceed with caution and ask whether the data and interpretation are from a reputable source and have been through peer-review," Osborn said.

AFP has previously debunked misleading claims about the proportion of vaccinated patients being hospitalised for Covid-19 in New South Wales.