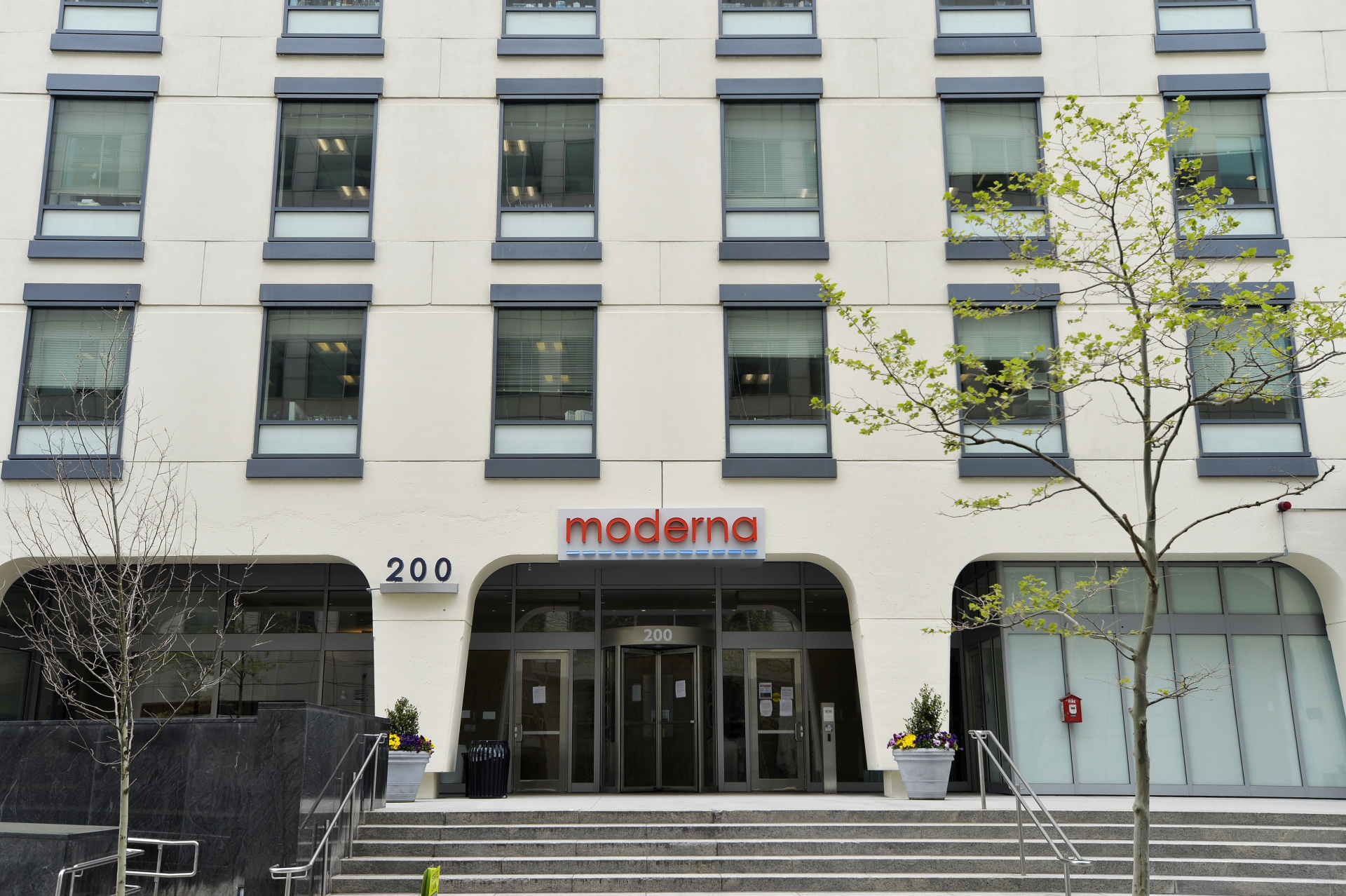 The Moderna headquarters are seen in Cambridge, Massachusetts on May 18, 2020 ( AFP / Joseph Prezioso)

Online articles and social media posts cite a scientific paper to claim that pharmaceutical giant and Covid-19 vaccine manufacturer Moderna created the virus that causes the disease. But the lead author of the study said its findings do not implicate the company, and independent experts say the report itself lacks merit.

"Whilst you were distracted by the Battle for Ukraine, Documents were published confirming Moderna created the Covid-19 Virus," says the headline of a March 14, 2022 article on The Expose website, which has previously published inaccurate health information debunked by AFP.

"Evidence has emerged which proves beyond a reasonable doubt that the Covid-19 virus was created by the very pharmaceutical giant that has made billions through the sale of an experimental Covid-19 injection; Moderna," the story says, citing this study published in the peer-reviewed journal Frontiers in Virology. 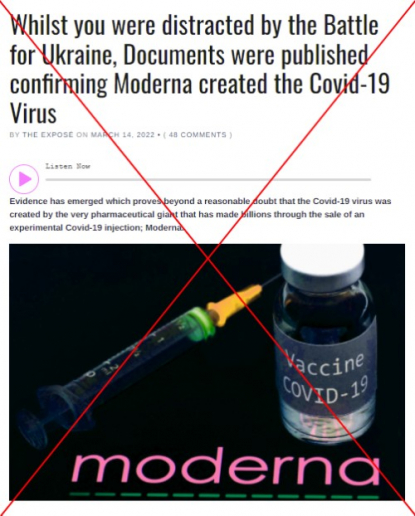 Screenshot of an online article taken on March 23, 2022

The Expose published a similar article with the claim on March 3, 2022, and more examples of the claim appeared on Twitter and Facebook.

The claim circulated as Moderna said that it was pursuing regulatory approval of its Covid vaccine for children under the age of six, and on March 17 asked the US Food and Drug Administration for emergency authorization of a second booster shot of the company's Covid-19 vaccine for adults.

The Expose article claims that because the study shows a 19-nucleotide portion of the SARS-CoV-2 genome is a complementary match to a sequence patented by Moderna in 2017, two years before the pandemic began, the company must have created the virus which has now claimed more than six million lives globally.

Moderna did not reply to several requests for comment.

The study's lead author, Bala Ambati, said that the paper was intended to look into the cause of the outbreak, amid debate over the origin.

"We are not casting aspersions on any person, company, or country, but rather raising the hypothesis that recombination in a human cell line with a lab leak could be the origin of SARS-CoV-2," said Ambati, an ophthalmologist and professor at the University of Oregon.

According to Ambati, both lab leak and natural spillover theories are plausible regarding the origin of the coronavirus, based on available evidence.

While the exact origin of SARS-CoV-2 remains unknown, recent preprints (studies that are not yet peer reviewed) support the idea that the virus jumped from animals to people in a seafood market in Wuhan, China in 2019.

But the theory of a lab leak has not been ruled out.

"The issue with most of these hypotheses is that they are not prospectively testable. We want to stimulate discussion amongst all concerned on both 'sides' of the issue to try to produce prospective experiments that can prove or disprove their hypotheses," Ambati said.

However, Ambati's paper was met with harsh criticism from three other virologists who addressed the online claims.

Yale School of Medicine immunobiology professor Craig Wilen rejected the legitimacy of the manuscript published in Frontiers in Virology, saying: "This 'study' and 'hypothesis' are complete garbage and are more akin to a conspiracy theory than evidence or research."

Given that the SARS-CoV-2 genome is about 30,000 nucleotides long, Wilen said that "the idea that a 19-nucleotide sequence overlap proves anything is complete nonsense."

The doctor also quashed the idea that a present-day company could concoct an entire genome, as the Expose articles claim. "Scientists are nowhere near being able to create a new viral species from scratch even if that was the goal," he said.

Scott Kenney, a virology professor at the Ohio State University College of Veterinary Medicine, said the odds of Moderna having created the virus are "much less" than the probability that the match occurred naturally.

Referring to the genome of Covid-19 and Moderna's patented sequence, he said: "The authors' stretch to connect the two subjects is quite dubious."

Both Kenney and Carlos Romero, a professor at the University of Florida College of Veterinary Medicine who researches viruses, thought that the probability of the 19-nucleotide match occurring naturally was miscalculated in the study.

"That information I do not consider reliable," Romero said, adding that it was "preposterous" to conclude that Moderna fabricated the coronavirus based on the evidence presented.

"Frontiers in Virology," the journal that published the paper, is a peer-reviewed publication. Its website says that "peer review is handled by active researchers and scholars, carefully appointed to our Editorial Boards according to strict criteria of excellence, and who certify the accuracy and validity of research with their names on the published article."

Only one scientist, a veterinary researcher in China, is listed as the reviewer of the manuscript, a point noted as unusual by Yale's Wilen. "Almost all papers have three reviewers so it's odd if this paper indeed has only one," he said.

Kenney agreed, saying that while it varies by journal, most send manuscripts to two or three field experts and "based upon their reviews and the editor's best judgment, it is revised, rejected, or accepted."

He disputed the findings of the study, saying: "To me there are clear holes and potential bias in the data and the discussion and claims linking to Moderna appear to be a poor attempt to sensationalize this dubious research. Sadly any research presented in this manner is going to be further misconstrued and spread by mainstream media sources and groups that have other agendas."

"As scientists we have an obligation to be cognizant of the downstream effects of our research to public audiences, and not have hidden ulterior motives built into our discussions," he added.

An addendum correcting reference errors and a typo in the manuscript is currently under review.