A Facebook post claims that Russia created its own version of McDonald's after the fast-food chain temporarily shut down operations in the country in response to Russia's invasion of Ukraine. This is misleading; DonMak opened in Ukraine’s separatist-controlled cities of Donetsk and Luhansk a few years after Russia’s conflict with Ukraine in 2014. The images in the post were taken in Ukraine, not Russia, several years ago.

A Facebook post published on March 12, 2022, includes a composite image of a fast-food restaurant that borrows much of its look from the popular American McDonald’s franchise.

“Russia recuperates the chain of restaurants abandoned by Mac Donald's and renames them Don Mac (sic),” reads the post’s caption. 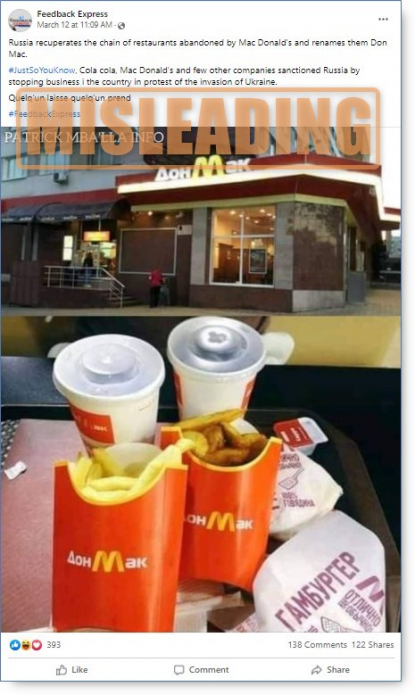 One image shows a storefront branded with what appears to be the famous McDonald’s Golden Arch.

The second picture shows a tray of food in packaging that, again, resembles the colour and style of McDonald’s but features words in a Cyrillic text, common to Russian and other Slavic-speaking countries.

While both images are genuine, the claim is misleading.

On February 24, Putin ordered Russian troops into Ukraine, triggering unprecedented Western sanctions against Russia and sparking an exodus of foreign corporations including H&M, McDonald's and Ikea.

McDonald’s bowed to public pressure on March 8, 2022, and suspended their operations in Russia over Moscow’s internationally-condemned invasion of Ukraine, as AFP reported.

“We cannot ignore the needless human suffering unfolding in Ukraine,” the fast-food giant said, announcing the temporary closure of all 850 restaurants in Russia, where it employs 62,000 people.

But the images on Facebook of new "DonMak" restaurants were not taken in Russia.

A reverse image search of the photos led to an article by Vice from March 30, 2017. Headlined “DonMak, Burger Impersonator”, the piece described the rise of three new knockoff burger joints in Donetsk – a pro-Russian separatist city in Ukraine's eastern Luhansk region. 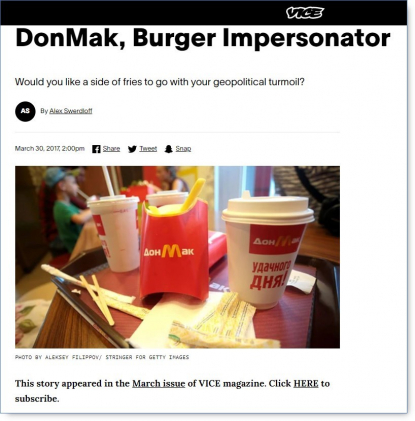 A screenshot of the Vice article published on March 30, 2017

McDonald’s had closed all its restaurants in rebel-controlled areas in 2014 when Russia invaded regions in the east of Ukraine, leading to Western sanctions.

The abandoned restaurants in Donetsk were taken over a few years later, as AFP reported in 2016.

The new owners retained much of the look and feel of McDonald’s, but added a local linguistic twist and called the franchise business DonMak.

The first picture in the misleading post can be seen in a Russian article from July 20, 2016, describing the opening of a third “DonMak” in Donetsk city centre. 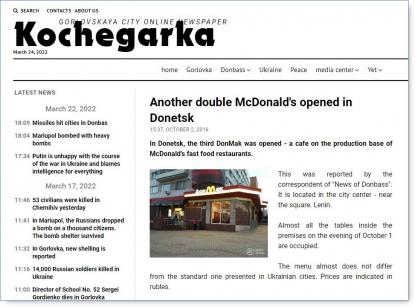 A screenshot of the translated article, taken on March 24, 2022

The second picture has been online since at least January 2017. It appeared in this Russian photo essay, also about a restaurant opening in Donetsk. 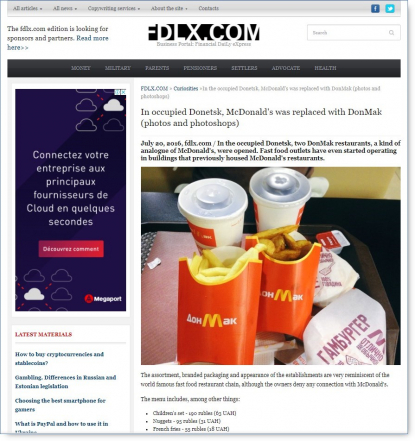 A screenshot of the translated article, taken on March 24, 2022

An AFP photograph taken on June 9, 2016, shows French fries and drinks on a tray in "DonMac/DonMak" in Donetsk. The branding and packaging match the picture in the misleading Facebook post. 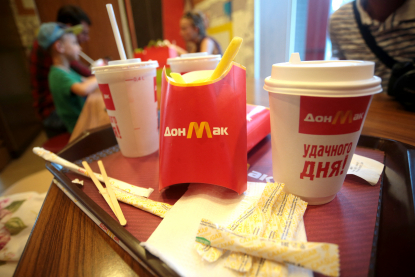 Today, March 24, marks exactly one month since Russia's invasion of Ukraine. More than 10 million Ukrainians have fled their homes, as cities have faced sustained Russian bombardment from land, sea and air. The month of war has displaced 4.3 million children -- more than half of Ukraine's estimated child population of 7.5 million, according to the UN children's agency Unicef.