No evidence text messages are sent by human traffickers

Facebook posts claim that interacting with a text message from a woman who seems to have contacted a wrong number will allow human traffickers to track the location of the respondent's phone. But organizations in Canada and the United States that work to prevent human trafficking say such texts are not a common tactic used by traffickers, and that sharing this type of warning message may ultimately cause more harm than good.

"If you get this text. DO NOT REPLY IN ANY WAY. It's a human trafficking gig. The minute you reply it sends them a pin of your location," claims a March 19, 2022 Facebook post.

Variations of the post, all including the same woman's photo, warn that human traffickers will use text messages to track location.

But there is no evidence that such messages are being used for this purpose, according to organizations that work with victims of trafficking.

Ashley Tingley of The Canadian Centre to End Human Trafficking said it is "unlikely" a trafficker would send out this type of phishing text, but also advised against interacting with such messages regardless. "You can block, delete and move on," she said.

Although people often forward such warnings with the thought that they might help a potential victim, this type of social media post can perpetuate misperceptions about trafficking, "making it more challenging for people to recognize their own situation as being trafficking, or recognize the situation they're in as grooming and luring," Tingley said.

"Traffickers are very skilled at building a innocuous-looking relationship, posing as a protector, a provider, potentially a partner, and really building a sense of trust with that individual," she said.

She also warned that sharing these posts, which run counter to more common experiences with traffickers, can further alienate victims.

"Trafficking and child sex trafficking is absolutely horrific and no one disputes that, but it is really important that we're sharing accurate, verifiable information whenever possible," Tingley said, pointing to the Canadian Human Trafficking Hotline as a key resource.

Polaris, the organization that runs the US National Human Trafficking Hotline, directed AFP to an Instagram post it put out to debunk these "wrong number text message" claims saying: "Although these messages cause fear and alarm, there is no evidence that they are connected to sex trafficking. In reality, traffickers rarely target people they don't know for the purposes of tracking their location and kidnapping them." 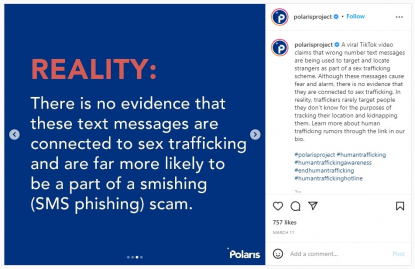 The rumor is also addressed on the Polaris website with added advice to ignore similar text messages as they are likely part of a "smishing (SMS phishing) scam" which aims to swindle victims by persuading them to give up personal or financial information.

Asked about the social media posts, the Royal Canadian Mounted Police said it was not aware of the technique described.

AFP Fact Check has debunked other unfounded trafficking warnings, including a false scheme targeting shoppers at the Northgate Mall, and a false rumor of children abducted from the Wonderland amusement park.