Skip to main content
A truck loaded with anti-tanks barriers is parked at Independence Square in Kyiv on March 1, 2022. ( AFP / Sergei SUPINSKY)

A video that shows dozens of listings for pharmaceutical companies with offices in the Ukrainian capital Kyiv has been viewed tens of thousands of times on social media. The posts alluded to unproven claims -- promoted by Russian state media -- that US-funded labs in war-torn Ukraine are developing biological weapons. But the video has been shared in a misleading context; while the companies shown in the video all have offices in Kyiv, most are headquartered elsewhere and also have other global offices.

"Wow‼️ Looks like Ukraine was the Mecca for Big Pharma," reads the caption published alongside the video on Facebook on March 10, 2022.

The video is a slideshow of listed offices in Kyiv for various pharmaceutical companies.

"Take note of of (sic) industry and location," reads text superimposed on the video. 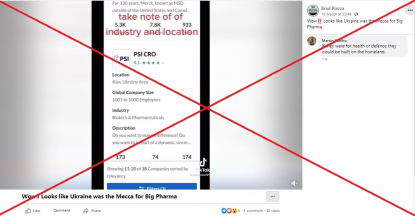 The post alludes to unproven claims that US-funded labs in Ukraine are developing biological warfare weapons.

Former US officials and non-proliferation experts say the labs are actually working to detect and prevent the spread of bioweapons, and have also helped in containing disease outbreaks. AFP debunked the claims here.

The video was also shared alongside a similar claim on Facebook here and here, as well as more than 94,000 times on TikTok.

The list of biotech and pharmaceutical companies in and around the Kyiv area appears to have been taken from a search on job review site Glassdoor.

AFP found the search was conducted by setting the location to "Kyiv" and the industries filters to "biotech and pharmaceuticals".

However, a further search of the companies listed in the post found most had headquarters and offices situated outside Kyiv.

German pharmaceutical Bayer is headquartered in Leverkusen, Germany It also has offices around the world in countries including Albania, Morocco, and Latvia.

AFP found that only two companies listed in the video are Ukrainian.

Ukrainian pharmaceutical company Arterium states it is one of the country's leading companies manufacturing generic and original medicines.

Farmak JSC states on its website it is "one of the leading pharmaceutical companies in Ukraine".