A video of a violent clash between demonstrators and police officers has been viewed tens of thousands of times on social media alongside a claim it shows Russians protesting against Putin's invasion of neighbouring Ukraine. But while thousands were detained across Russia over Ukraine protests, the video had been shared in a misleading context. The footage has previously circulated in reports since January 2021 about a Chechen student who fought with riot police in Moscow during protests calling for the release of a Kremlin critic.

It shows a group of people clashing with riot police. 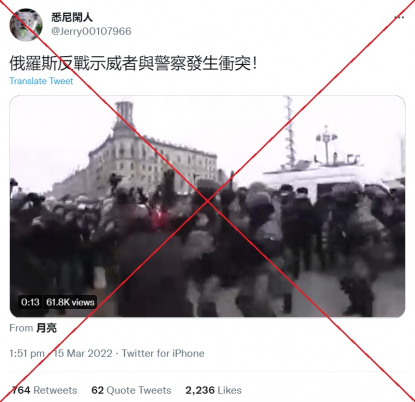 OVD-Info, which monitors arrests during protests in Russia, said more than 14,000 people had been detained at rallies against Putin's invasion of Ukraine since the beginning of the war, AFP reported on March 13.

AFP captured footage of arrests at a rally in Moscow on the same day here.

The same video was also shared alongside a similar claim here on Facebook, here and here on Twitter, and here on the US social media site Gettr.

Comments on the posts suggested some social media users thought the video was recent.

"Putin is reluctant to hurt the Ukrainian people, but he doesn't hesitate to break the legs of the Russian people," one user wrote.

However, the video predates Russia's invasion of Ukraine by more than one year.

A reverse image search of keyframes found the same video published here on Twitter by OC Media, an online news site based in the Caucasus, on January 28, 2021.

The OC Media report states: "20-year-old Chechen Sayd-Mukhammad Dzhumayev has become a symbol of the protests in Russia after this video of him fighting with police was widely shared with the hashtag #ДжумаевНашГерой (Dzhumayev is our hero)."

20-year-old Chechen Sayd-Mukhammad Dzhumayev has become a symbol of the protests in Russia after this video of him fighting with police was widely shared with the hashtag #ДжумаевНашГерой (Dzhumayev is our hero).

According to this report published by The Moscow Times newspaper on August 20, 2021, Dzhumayev was sentenced to five years in a penal colony following the incident.

The protest called for the release of jailed Kremlin critic Alexei Navalny, the report states.

Below are screenshot comparisons of the video in the misleading posts (left) and the video published by OC Media (right): 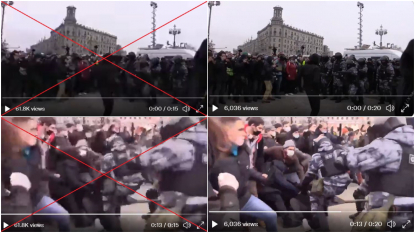 The same footage was also published in reports about the January 2021 protests here by the Czech broadcaster CNN Prima News and here by Estonian online publication Open Media.