A video viewed more than a million times has been shared alongside a claim it shows Russian troops parachuting into Ukraine following Moscow's invasion of its pro-Western neighbour in February 2022. While there have been reports of Russian paratroopers being deployed as part of the invasion, this video has circulated since 2014 in a social media post about a military exercise conducted in Russia. 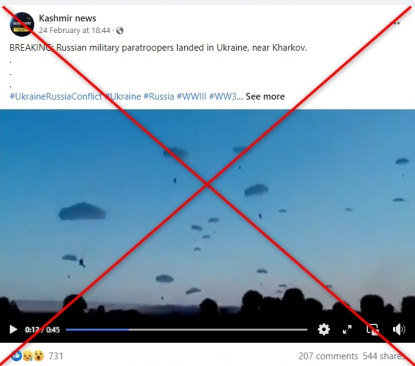 It has also circulated in multiple languages, including Malaysian, Bulgarian, German, Chinese, Burmese, Hindi and Arabic.

Kharkiv has come under sustained bombardment since February 24, 2022, with the sounds of shelling and explosions heard in the city, shortly after Russian President Vladimir Putin launched an invasion of the country.

There have also been reports of Russian paratroopers being deployed to take control of strategic locations.

However, the video shared in the misleading posts has been circulating online since at least 2014.

A reverse image search found this slightly longer video posted by a user of the Russian social network VKontakte on March 14, 2014.

The same user posted two other images on March 13, 2014 showing men in military gear with the caption: "Landing near Rostov in the city of Taganrog ... two jumps per day".

Taganrog is a city located in the Rostov region of southwestern Russia; it is about 31 miles (50 kilometres) east of the Ukrainian border.

The Russian Defence Ministry made this announcement dated March 13, 2014 that a military exercise was conducted at the Kuzminka training range. Kuzminka is about 22 miles (36km) northeast of Taganrog.

Below are screenshot comparisons of the video in the misleading Facebook post (left) and the 2014 video posted on VKontakte (right): 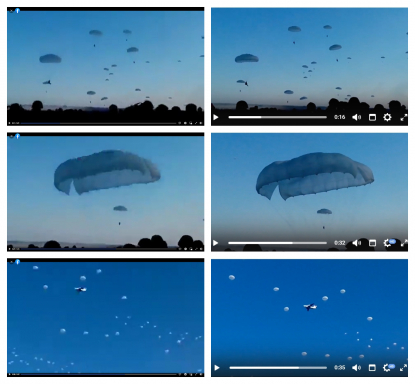 Russia's TASS news agency reported here on the major military exercise, which it said would end on March 14, 2014.