Skip to main content
A medical staff member administers a dose of Pfizer/BioNTech's Covid-19 vaccine to a woman in Kuala Lumpur on May 31, 2021. ( AFP / Mohd Rasfan)

An infographic purportedly issued by Malaysian health authorities has been shared multiple times on social media with a claim that residents should get a fourth dose of the Covid-19 vaccine because "the Omicron variant will spread" after Malaysia reopens borders on April 1, 2022. However, the claim is false; the Malaysian Ministry of Health denies issuing the infographic. As of March 25, 2022, the government has not issued any statement about plans for the fourth dose in the country.

The infographic was shared here on Facebook on March 12, 2022.

The Malaysian-language caption translates in part as: "On April 1, 2022, Malaysian citizens will be asked to take a fourth dose for more effective protection."

Malaysian-language text in the infographic translates as: "The Omicron variant will spread as the country opens its borders on April 1, 2022.

"Malaysians are advised to take a fourth dose for more effective protection. 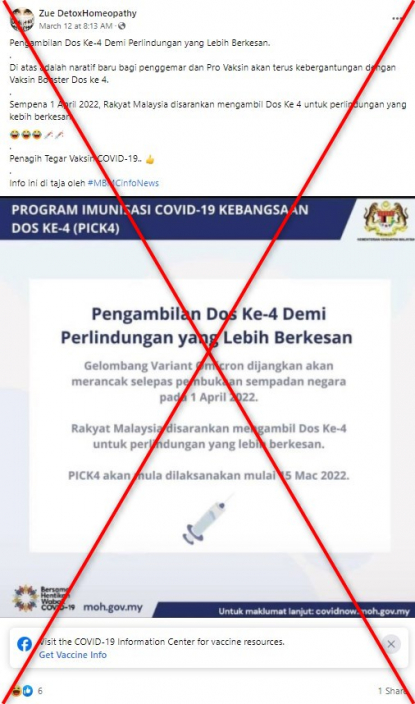 "PICK" refers to Malaysia's national immunisation programme, which is currently up to a third dose for most residents, called "PICK-B".

The move is part of the country's transition towards endemicity and aimed at boosting the economy and reviving Malaysia's ailing tourism sector, Ismail Sabri said.

The infographic has also been shared on Facebook here, here and here with a similar claim.

The Malaysian Ministry of Health (MOH) has denied issuing the infographic.

In a Malaysian-language post on its official Facebook page on March 11, 2022, it said: "The MOH would like to inform the public that this infographic is fake and has never been issued by the MOH." 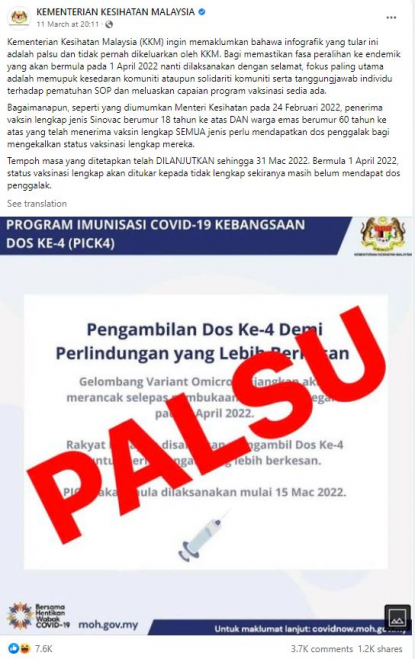 The Malaysian National Security Council's official Twitter account also issued a press statement from the Ministry of Communications and Multimedia on the same day.

The press statement translates from Malaysian to English as: "The Ministry of Health has explained that it has never issued the infographic."

"The public is advised to refer to the Ministry of Health official website and social media accounts for the latest verified news," the statement also said.

No plan for fourth dose

A spokesman for Malaysia's Health Minister Khairy Jamaluddin referred AFP to comments made by the minister on February 17, 2022, regarding a fourth dose of the Covid-19 vaccine.

"There are currently no plans for a fourth dose of Covid-19 vaccine, the Ministry of Health's focus is on administering the booster doses," Khairy said at the time.

"Most importantly, our response will be based on the latest data," he added.

As of March 25, 2022, the government has not issued any statement about plans to admister the fourth dose.

While many countries are administering third doses, recommendations for a fourth jab are still rare — although Sweden and Israel have done so for some of its residents, including health care workers and the elderly.

A new Israeli study published in the New England Journal of Medicine, meanwhile, has found a fourth dose of existing mRNA Covid-19 vaccines may only have "marginal benefits" for younger, healthy adults, AFP reported.