Posts on social media say Disney CEO Bob Chapek was arrested for human trafficking following a sting operation that ensnared four Disney employees. This is false; police in Los Angeles, where Chapek lives, say he was not arrested, the website where the claim originated labelled its report satire, and an official list of the 108 suspects detained in Florida does not contain Chapek's name, nor was he mentioned in the probe. A search of the LASD inmate information center did not find valid entries under "Bob Chapek" or "Robert Chapek."

A web archive search reveals that the "Vancouver Times" story initially lacked any mention of its satirical nature, but a "satire" label was later added to the page. 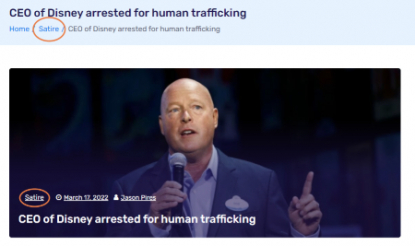 The "satirical" nature of the article was initially not mentioned on the page but was later added, as shown in this screenshot taken on March 23, 2022

The false story was shared after news of arrests by the Polk County police in Florida related to an "undercover human trafficking operation."

The arrests were mostly related to prostitution and solicitation, which are illegal in Florida. Four arrests, out of 108 in total, were for predatory behavior towards minors.

Polk County Sheriff Grady Judd said at a press conference on March 16 that four Disney employees were among those detained.

According to the sheriff, three employees -- who respectively work in the restaurant industry, software development, and in IT for Disney -- were arrested for soliciting prostitution, while a fourth was charged for three counts involving harmful material.

"He was a lifeguard at the Polynesian Resort for Disney and was bragging about that," the sheriff said of the latter.

AFP received the full list of suspects arrested in the operation and confirmed that it does not contain Chapek's name.

AFP asked The Walt Disney Company about the posts linking Chapek to the arrests but no one had responded by time of publication.