Skip to main content
Lia Thomas dives to compete in the 100-yard freestyle swimming race for the University of Pennsylvania at the 2022 Ivy League Women's Swimming & Diving Championships in Cambridge, Massachusetts on February 19, 2022 ( AFP / Joseph Prezioso)


A tweet attributed to collegiate swimmer Reka Gyorgy, blaming transgender athlete Lia Thomas for costing her a slot in a major finals, has been shared across social media. But Gyorgy, a Hungarian who represents Virginia Tech University, told AFP she did not send the tweet, and Twitter said the impostor account using her name has been suspended.

"My finals spot was stolen by Lia Thomas, who is a biological male. Until we all refuse to compete nothing will change. Thanks for all the support retweets and follows I wont stop fighting," says a March 20, 2022 tweet from an account listed as @RekaGyorgy_.

The tweet was later deleted, but not before it was retweeted more than 19,000 times. It continues to be shared as a screenshot on Facebook. 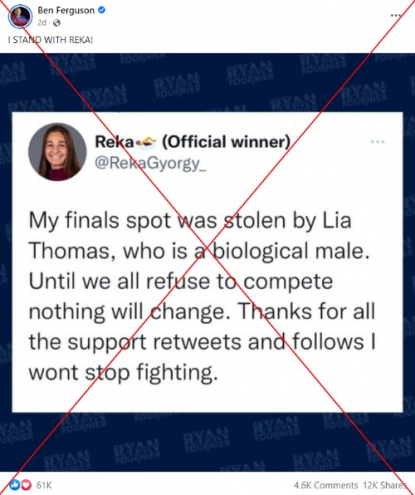 Gyorgy, 25, did author an open letter questioning the National Collegiate Athletic Association's (NCAA) decision to allow Thomas to compete in women's races, raising her profile amid the broader political debate over the inclusion of transgender women in sports.

The now deleted tweet referred to a 500-yard freestyle race at the US collegiate championships in Atlanta, in which Thomas was first and Gyorgy 17th. Only the top 16 finishers qualify for the NCAA swimming finals, so Gyorgy did not receive the All-American honors she sought.

Thomas previously swam for the University of Pennsylvania in the men's division, and her participation as a woman has divided competitors. Sixteen members of her 40-member team signed a letter arguing she had obtained an "unfair advantage," while 300 current and former swimmers signed an open letter calling for her to be allowed to compete.

Gyorgy, a former Olympian, is among those who publicly expressed concern over the NCAA's policy regarding Thomas' participation in the March 17 race, but she said she did not author the viral tweet.

A letter she shared with AFP and other media from her private Instagram and Facebook accounts, urging the NCAA to change its current rules, has different language from the tweet, and she did not advocate that her fellow swimmers refuse to compete.

She did write: "It feels like that final spot was taken away from me because of the NCAA's decision to let someone who is not a biological female compete." 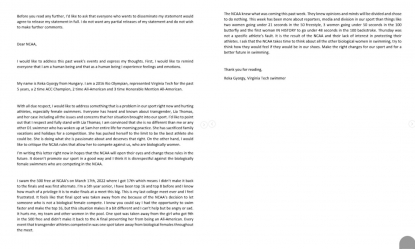 While some accounts claimed that Twitter's actions were "censorship" of Gyorgy for speaking out on the controversial topic, Twitter spokeswoman Elizabeth Busby said in a statement: "The account referenced (@RekaGyorgy_) has been permanently suspended for violating our platform manipulation and spam policy, specifically the creation of fake accounts."

This is further supported by tweets pointing out that the Twitter account @RekaGyorgy_, which was created in November 2021, seems to have previously existed under the handle @Amanda191923. A Twitter search for that handle now leads back to the @RekaGyorgy_ account.