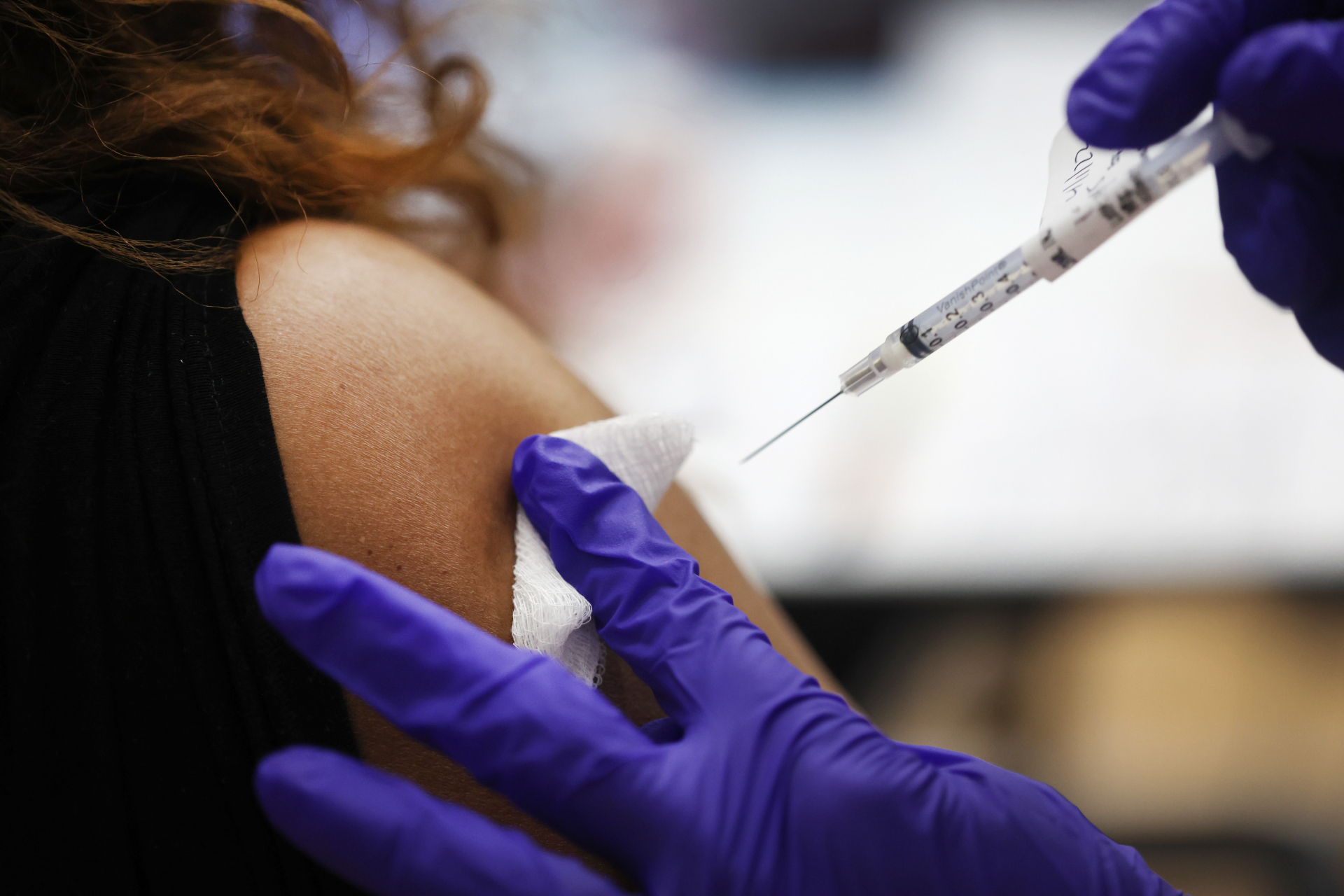 Online articles claim that recipients of Covid-19 booster shots will develop acquired immunodeficiency syndrome (AIDS). But medical experts rejected the claim, saying there is no evidence that Covid-19 vaccines can cause the chronic, life-threatening condition.

"Millions get AIDS from Vax by Fall – Dr. Elizabeth Eads," says the headline of a March 23, 2022 article on USAWatchdog.com.

Asked whether the Covid-19 vaccines are injecting people with AIDS , Dr. Eads is quoted as saying, "That is exactly what I am telling you." 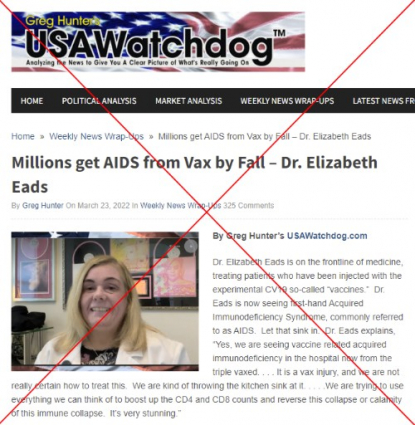 Screenshot of an online article taken on April 5, 2022

Another article also makes the claim and identifies Eads as "one of America's Frontline Doctors" -- a group notorious for spreading health misinformation.

A search of the organization's website did not reveal references to Eads, but it previously made a similar false assertion about the shots causing immune erosion --"Vaccine Acquired Immune Deficiency (VAIDS)."

The US Food and Drug Administration (FDA) approved on March 29 a fourth dose of the Pfizer and Moderna Covid-19 shots for Americans 50 and older, and the US Centers for Disease Control and Prevention (CDC) says certain immunocompromised individuals may receive a fifth shot.

Below, AFP Fact Check breaks down the claims.

The USAWatchdog article includes a 53-minute long Rumble video in which "25-year veteran Dr. Elizabeth Eads" is interviewed about "the real unreported effects of the CV19 bioweapons and the dangerous lies by Big Pharma the FDA and CDC." 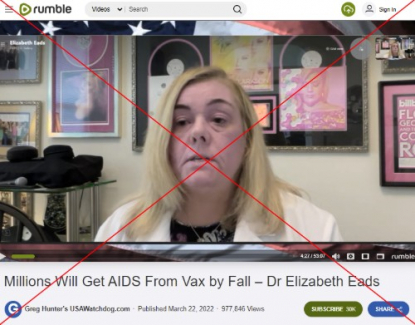 Screenshot of a Rumble video taken on April 5, 2022

"Yes, we are seeing vaccine-related acquired immune deficiency in the hospital now, from the triple vax," Eads says in the video, calling the phenomenon a "calamity of immune collapse" and a third dose of Covid-19 vaccine "the kill shot."

She goes on to say that Covid-19 vaccines are a "spike lentivirus ... made up of HIV and AIDS," citing an unspecified Stanford University study for the claim.

Stanford associate professor of pathology Scott Boyd said that no research from the university supports Eads' claims. "I think they're completely inaccurate, they don't make sense," he said of her statements.

Eads, who practices family medicine in Florida, appears to have an active osteopathic physician license, according to the Florida Board of Osteopathic Medicine, although her license was suspended in 2005 after the board found she had not completed sufficient continuing medical education courses.

She is listed by the Florida Department of Health as being associated with area hospitals including Halifax Health Medical Center of Daytona Beach and AdventHealth Daytona Beach.

AIDS, caused by human immunodeficiency virus (HIV), devastated and stigmatized the gay community and terrified much of the world throughout the 1980s and 1990s. Medicine can now slow or prevent progression of the disease. Left untreated, people with AIDS "typically survive about three years," according to the CDC.

Tufts University School of Medicine virologist John Coffin addressed the claim that Covid-19 vaccination causes AIDS. "To be blunt, this is fear mongering based in garbage science at its most heinous," he said.

Zandrea Ambrose, HIV expert and associate infectious disease professor at the University of Pittsburgh, dismissed Eads’ claim about Covid-19 shots and lentiviruses, a class of retroviruses that includes HIV.

"None of the approved Covid-19 vaccines in the US or other countries use lentivirus vectors or lentivirus components,” she said.

The French non-profit Institut Pasteur has mentioned a nasal Covid-19 vaccine candidate using a lentivirus as a "vector," but it is not on the market to date. A viral vector vaccine -- the traditional format for shots -- contains a harmless version of a virus.

University of Miami Miller School of Medicine public health professor Olveen Carrasquillo explained that evidence does not support Eads' claims. "My sense is that this is all part of an ongoing disinformation campaign we have seen throughout the epidemic," the doctor said.

AIDS is only caused by the HIV virus, Carrasquillo said. Ambrose agreed, and said: "AIDS does not refer to immunodeficiencies from other causes."

The doctors also said that Covid-19 vaccines do not harm the immune system.

"Quite the opposite, there is overwhelming scientific evidence that vaccines help the body’s immune system provide excellent protection against Covid," Carrasquillo said.

Ambrose added: "Usually the concern is in immunocompromised individuals, who may not develop a robust immune response from the vaccine (or any vaccine), but that is due to their underlying condition and not the vaccine itself."

In the video of Eads, the interviewer quotes an article by the Daily Expose, a website that has previously spread inaccurate health information. "The UK Government quietly published data confirming the Triple Vaccinated are just weeks away from developing Acquired Immunodeficiency Syndrome," the article's headline says.

It then argues that because the effectiveness of Covid-19 vaccines has been shown to wane over time, hence the need for booster shots, this means individual recipients' immune systems are failing. It cites UK public health data as alleged evidence for the claim.

A spokesperson from the UK Health Security Agency told AFP: "The claim is inaccurate. AIDS is caused by the HIV virus."

Coffin described the article's argument as "numerical sleight of hand," saying that "they make it appear to be something much more sinister, then take a completely unwarranted jump of 'logic.'"

However, the federal health agency from which the data was taken, the Robert Koch Institute, told AFP that the German report it referred to does not mention AIDS at all.

The Johnson & Johnson's vaccine has been linked to Guillain-Barré syndrome, a rare autoimmune disorder, but other vaccines have not.

However, the FDA says the chances of developing the disease post-vaccination is "very low," and the CDC says that "in most situations, Pfizer-BioNTech or Moderna Covid-19 vaccines are preferred over the J&J/Janssen Covid-19 vaccine for primary and booster vaccination due to the risk of serious adverse events."