Photo shows Albanians on a ship to Italy in 1991, not Europeans fleeing World War II

An image of an overcrowded ship in port has been shared on Facebook alongside a claim that it shows Europeans trying to reach North Africa during World War II. But the claim is false: the image shows Albanians fleeing their country in an attempt to reach Italy in 1991, soon after the fall of communism.

The post, archived here, was published on Facebook on March 18, 2022 and has been shared more than 100 times since.

“These aren't Syrians. They’re Europeans trying to get to North Africa (Algeria) during World War II. So next time you think of closing the borders you might want to check with your grandparents (sic),” reads the caption. 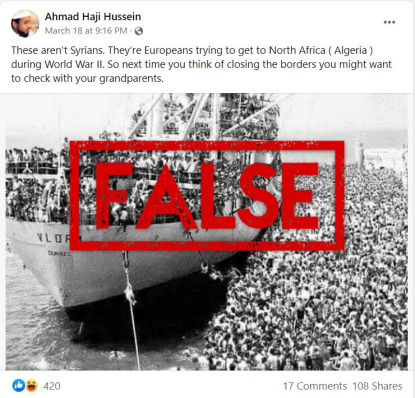 The black-and-white photograph included in the post shows thousands of people on a large ship called the Vlora, with thousands more on the dock.

However, the claim that the image shows desperate Europeans fleeing the Second World War is false.

A reverse image search of the photograph shared on Facebook led to a 2015 article published by the London Review of Books that explains that the image, which has been used to make various false claims, actually shows the events of August 1991, when a ship called the Vlora sailed from Albania to Bari, Italy carrying thousands of Albanian refugees seeking refuge abroad from the political and social unrest that followed the collapse of communism.

The image in the article is identical to the one on Facebook, except that it is in color. 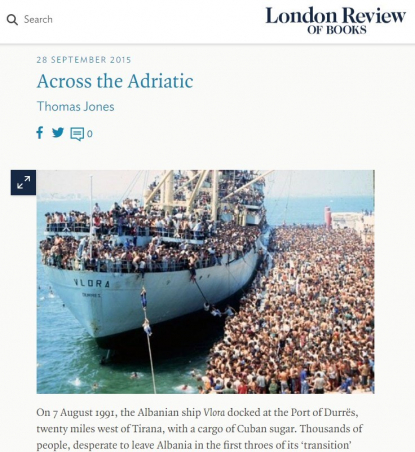 Screenshot of the same image, in color, on the London Review of Books website

Many other shots taken on the day, from different angles, are available in online archives.

Images of the Vlora packed with fleeing Albanians, taken from rarehistoricalphotos.com

A search on YouTube also revealed a report that included footage of the Vlora arriving in Bari.

The Parliamentary Assembly of the Council of Europe published a report on the exodus of Albanian nationals on January 27, 1992 and discussed the storming of the Vlora.

“On 8 August 1991 an estimated 10 000 Albanian nationals aboard several ships forced their way into the port of Bari in the south-east of Italy and approximately 1,000 into the port of Otranto,” reads a line from the report.