Images of vehicles in the United Kingdom queuing at petrol stations are circulating in Kenya as proof that fuel scarcity in the East African nation is not unique. Tweets sharing the claim downplay the Kenyan government’s role in the crisis, noting that the same scene is playing out in the UK. However, the pictures used as proof are old and the UK is not experiencing fuel shortages like Kenya.

On March 4, 2022, this Twitter account shared four images of vehicles in long lines at petrol stations alongside a caption that reads: “This is the current situation in the UK. Then some UDA psychopaths will blame president Uhuru Kenyatta”. 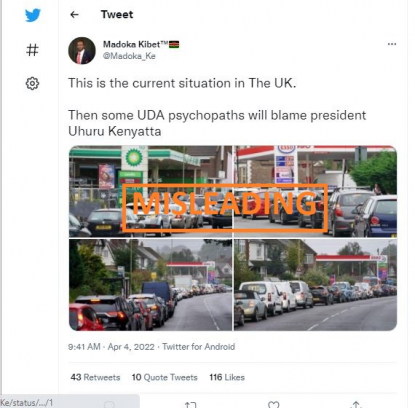 A screenshot of the misleading tweet, taken on April 6, 2022

For more than a week now, Kenya has experienced major fuel shortages, caused by the government’s failure to pay subsidies to oil marketers.

In Kenya, the government pays oil providers to subsidise costs for motorists at the pumps, but the companies have claimed they are owed payments for four months. As a result, they stopped supplying fuel, leading to countrywide scarcity.

While there has been instability in world oil markets owing to the war between Ukraine and Russia, the Kenya Pipeline Company (KPC) confirmed on April 2, 2022, that this was not the issue in Kenya and that the country had ample stocks.

The claim, together with the images, is therefore misleading.

A reverse image search led to a series of news reports published along with the images in September and October last year (see here, here, and here) when pumps in the UK ran dry following a shortage of truck drivers to transport fuel products from refineries. 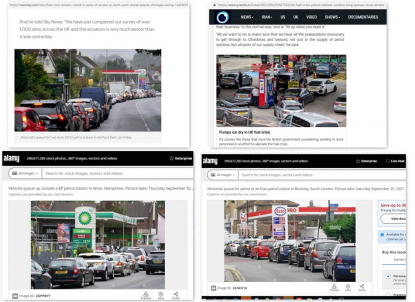 A screenshot of the same images shared recently on Facebook that were originally published in 2021, taken April 5, 2022

The UK shortage was also attributed to panic buying after BP warned the public on September 23, 2021, that it would have to "temporarily" close a handful of its petrol stations, because of a lack of drivers.

But, by October 5, 2021, the situation in the UK began returning to normal.

Meanwhile, Kenya’s problems have become a political hot potato as opposition leaders, including Ruto — who fell out with Kenyatta — criticised the government and linked the fuel crisis to the work of “cartels and state barons”.

On April 4, 2022, Kenyatta signed off on a supplementary budget to settle the government's debt with oil marketers in an attempt to restore supply.