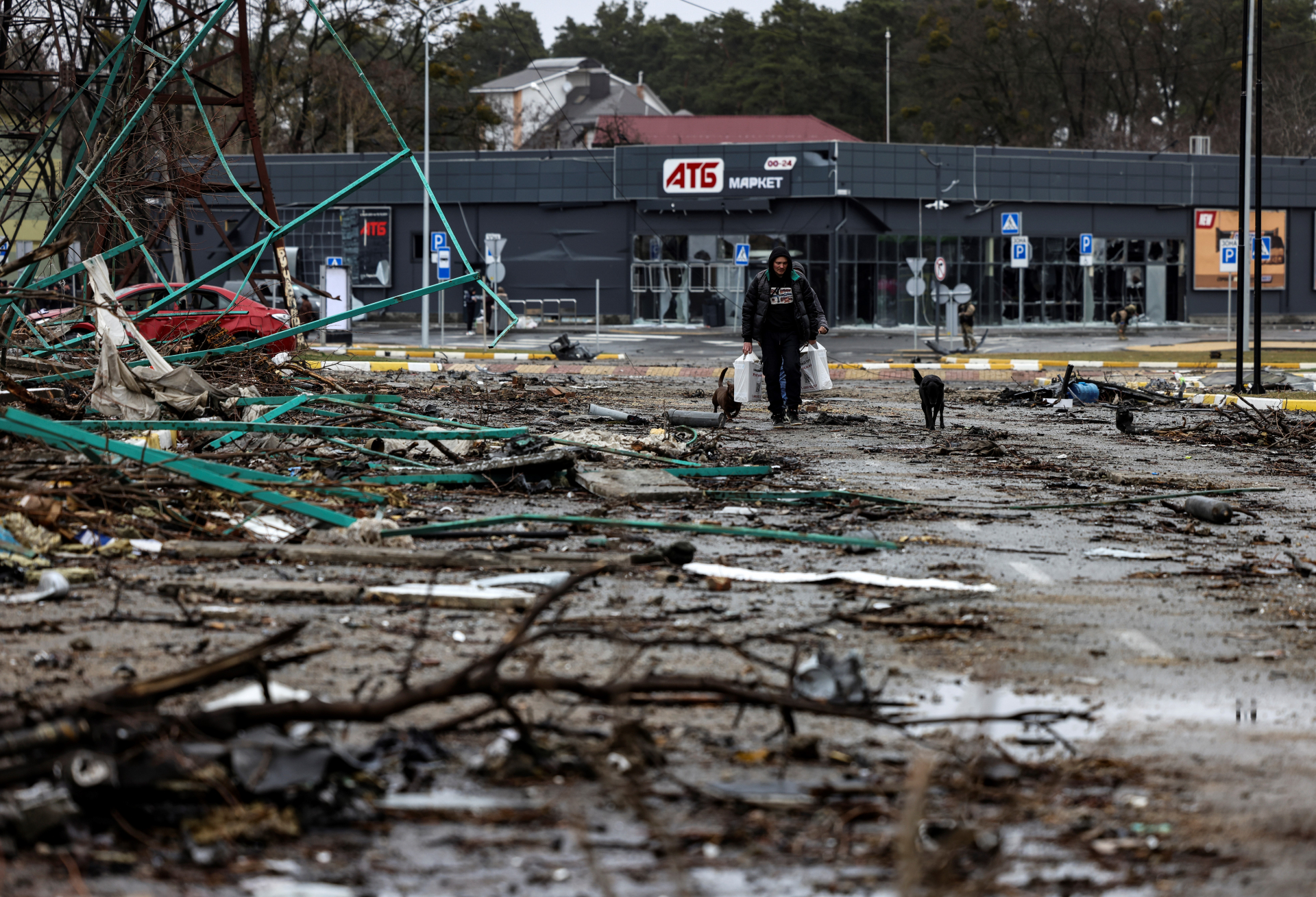 No, the discovery of bodies in Ukraine's Bucha was not 'staged' with 'actors'

Ukraine authorities have said bodies discovered on April 2, 2022 in the small town of Bucha were civilians killed by retreating Russian forces, allegations which Moscow has denied. Several posts shared on social networks -- including from Russian authorities -- have claimed that the scene was staged by Ukrainian forces and some of the so-called bodies were filmed moving. But AFP journalists on the ground confirmed they saw dead bodies that had been left for several days; footage used to support the misleading claims does not show the bodies moving, AFP's investigation found.

On April 3 the Russian defence ministry shared on its Telegram feed -- which has nearly 200,000 followers -- a 21-second video of the scene alongside a comment that it was "fake".

"The video with the bodies is puzzling: here, at 12 seconds, the “corpse” on the right moves its hand. At 30 seconds in the rearview mirror, the "corpse" sits down. The bodies in the video seem to have been deliberately laid out in order to create a more dramatic picture," the Telegram post reads.

On its Twitter account, the Russian embassy in Canada also posted the video, alongside a claim that it was staged and showed "faked dead bodies".

"Slowed down version clearly shows a "corpse" moves his hand and then sits up after the car passes by (seen in the rear mirror)," it claims.

The claim that the footage had been manipulated spread quickly on social networks in several languages.

"After a car passes one of the bodies lying on the ground we see in the rearview mirror an actor getting up," reads a French-language Twitter post that shared the same video.

The same video was viewed more than 800,000 times after it was shared alongside a similar claim on China's Twitter-like social media platform Weibo here, here, and here. 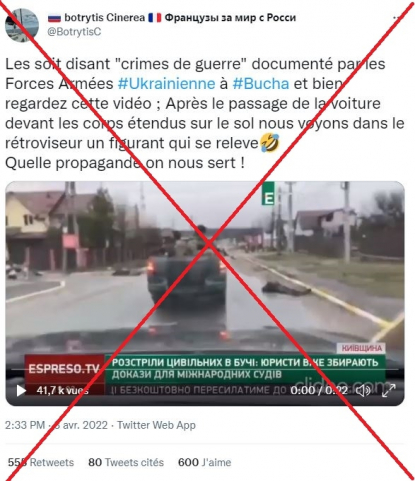 Where is the video from?

Apparently filmed from a vehicle following a Ukrainian military convoy, the video shows several bodies lying on a war-damaged street in the town of Bucha, which is northwest of Kyiv.

The video was published on April 2 on the YouTube channel of Ukrainian channel Espreso.TV.

The journalist describes the images as proof of "atrocities committed by the Russian occupiers of Bucha".

A longer, higher-quality version of the video was published the same day on the Twitter feed of the Ukrainian defence ministry.

It claims: "Local civilians were being executed arbitrarily."

In the misleading posts, the video has been slowed down. The quality is also diminished in comparison with the video shared by the Ukrainian defence ministry.

But, as many social media users have spotted (1,2,3), if we look closely at the sequence in higher quality footage, the bodies do not move.

The first man on the right-hand side of the video does not raise his arm -- the moving object is actually a droplet of rain on the windshield of the vehicle where the video was filmed from:

Getting fed up of this “it’s a moving arm” bullsh….. it’s a raindrop on the windscreen, alongside an inverted channel version for more clarity. The whole arm moving thing is just ridiculous. pic.twitter.com/ZiuEX4rFWc

AFP team on the ground confirms the scene

AFP journalists entered Bucha on April 2 and confirmed the presence of about 20 bodies in civilian clothing. One of them has its hands tied, they said.

They arrived on the scene on April 2 at around 3.30pm local time, Kemp told AFP Factuel.

In an email, he said: "As soon as we arrived, we could see that the street was littered with bodies. We first saw a group of three and then noticed there were more in either direction.

"They were spaced out along the street at irregular intervals over a distance of around 400 metres, some alone and some in small groups of two or three. We walked along the entire length of the scene at least twice. We counted the bodies, noting that there were 20, photographed them, and filmed them. At no time did we see any of them move.

"During that time we noted that the bodies were all wearing civilian clothing. They had waxy, sallow skin, and had stiff-looking fingers, with some having discoloured fingernails. Some had limbs in awkward poses.

"Some had their eyes open, some had their mouths gaping open. They had clearly been dead for a number of days, if not longer."

We compared the images being shared in misleading posts with the photos taken by AFP at the scene.

There are several signs that show they show the same scene.

AFP has circled in red the body of the victim and in green the damaged vehicle, a signpost, and part of the pavement: 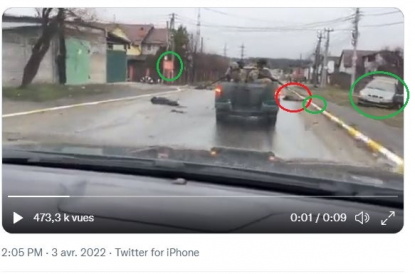 A screenshot of the video on Twitter taken on April 4, 2022

Danny Kemp sent us two pictures that he took on April 2, the same day the bodies were found: 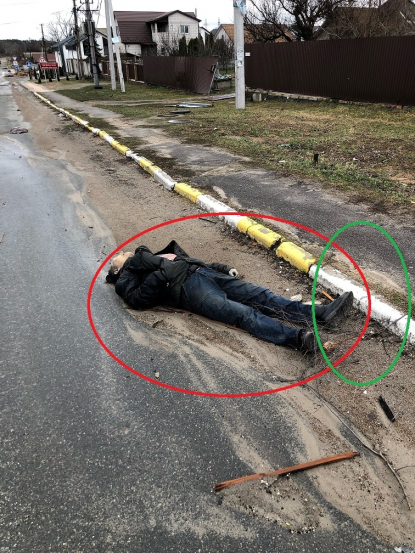 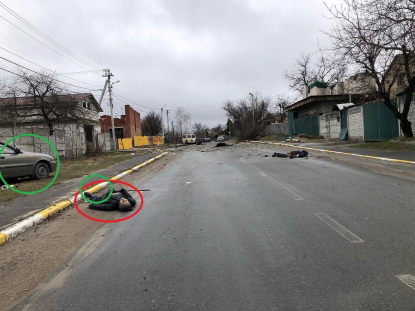 Two other AFP photographs -- taken a day later by a second team that arrived at the scene -- show a Bucha municipal worker about to put the same body in a mortuary bag: 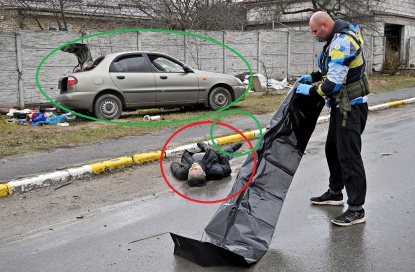 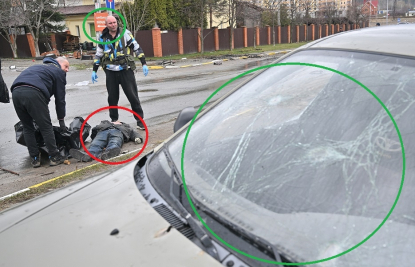 The body that some posts claim moves appears twice in the video of April 2, firstly on the ground and two seconds later in the rearview mirror of the vehicle from which it was filmed: 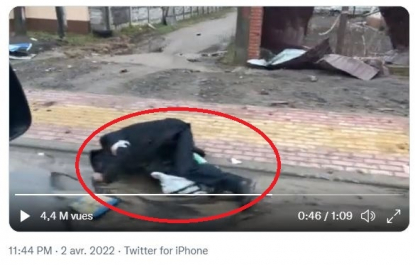 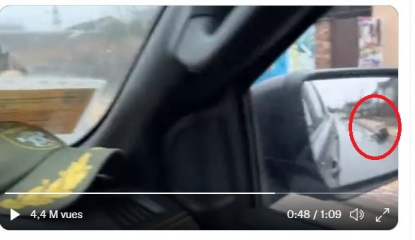 It was also photographed by AFP on April 3 in the same position and the same location: 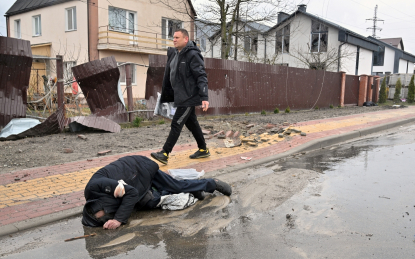 "Witnesses in Bucha told us they saw a column of some 70 Russian armoured vehicles leaving the town on the evening of Tuesday March 29 but that Russian shelling continued heavily on Wednesday March 30, and that the last shelling they heard was on Thursday March 31," Kemp said.

"AFP journalists in the area around Irpin, next to Bucha, heard shelling on Thursday. It was impossible to access the area until Friday as Ukrainian authorities said it was not safe to enter. AFP entered Irpin on Friday, April 1 and Bucha on Saturday, April 2."

An investigation by the BBC also concluded that allegations the massacre was "staged" are unfounded.

According to the BBC report, a body that appears to rise up in the video -- from the perspective of the vehicle's rearview mirror -- has likely been distorted by the reflection.

What we know about the deaths in Bucha

The small town of Bucha was occupied by the Russian army on February 27 and remained inaccessible for more than one month.

The bombings stopped on March 31 and Ukrainian forces were only able to enter the whole town a few days ago.

Ukraine accused the Russians of being responsible for these deaths.

This was denied by Moscow which announced it would investigate what it said was a "heinous provocation" to blame Russian forces. 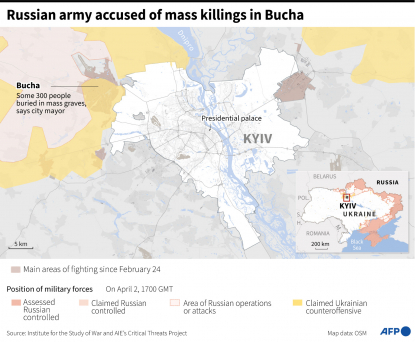 According to the mayor of Bucha, Anatoly Fedoruk, these people were killed by Russian soldiers with "a bullet in the neck".

The bodies of 57 people were also found in a mass grave, local rescue chief Sergei Kaplytchny said on Sunday, April 3, showing the site to an AFP team. 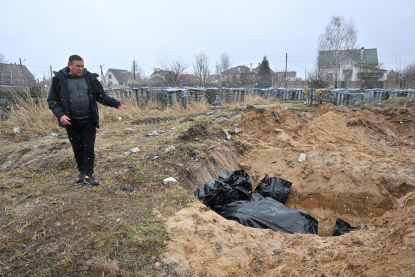 A man gestures at a mass grave in the town of Bucha, northwest of the Ukrainian capital Kyiv on April 3, 2022 ( AFP / Sergei SUPINSKY)

A dozen bodies were visible, some only partially buried, behind a church in the city centre.

Several were in black body bags and those that could be seen were wearing civilian clothes.

On April 2, Fedorouk said that "280 people" had been buried "in mass graves" because they could not be buried in the cemeteries of Bucha.

The exact number of victims is not yet known, the mayor of Kiev, Vitali Klitschko, told AFP after he visited Bucha on April 3. "We think that more than 300 civilians died," he said.

The satellite imagery was taken in mid-March and appears to show several bodies of civilians lying dead in or just off the roadway.

"High-resolution Maxar satellite imagery collected over Bucha, Ukraine (northwest of Kyiv) verifies and corroborates recent social media videos and photos that reveal bodies lying in the streets and left out in the open for weeks," Maxar Technologies spokesman Stephen Wood said in a statement.

The New York Times published an analysis of close-ups of Bucha's Yablonska street and concluded -- after comparing it with video footage from April 1 and 2 of dead bodies along the street -- that many had been there for at least three weeks when Russian forces were in control of the town.

AFP cross-checked the satellite images from March 19 with its own photos from the scene taken on April 2.

The bodies appear in the same positions and same locations.

Number 5 in the image shows the body of the first victim AFP analysed in this story.

He can be seen lying on his back next to a damaged car, which further debunks the baseless claims about him moving.

Several Western capitals and the UN expressed their indignation after the discovery of the bodies.

Michelle Bachelet, High Commissioner for Human Rights, said on April 4 she was "horrified" by the images of Bucha, which "raise serious and disturbing questions about possible war crimes".

The European Union, after the release of these images, condemned the "atrocities" on April 4 as it discussed a new round of sanctions against Moscow. 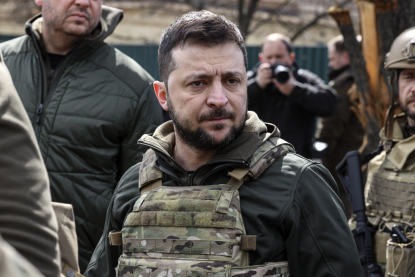