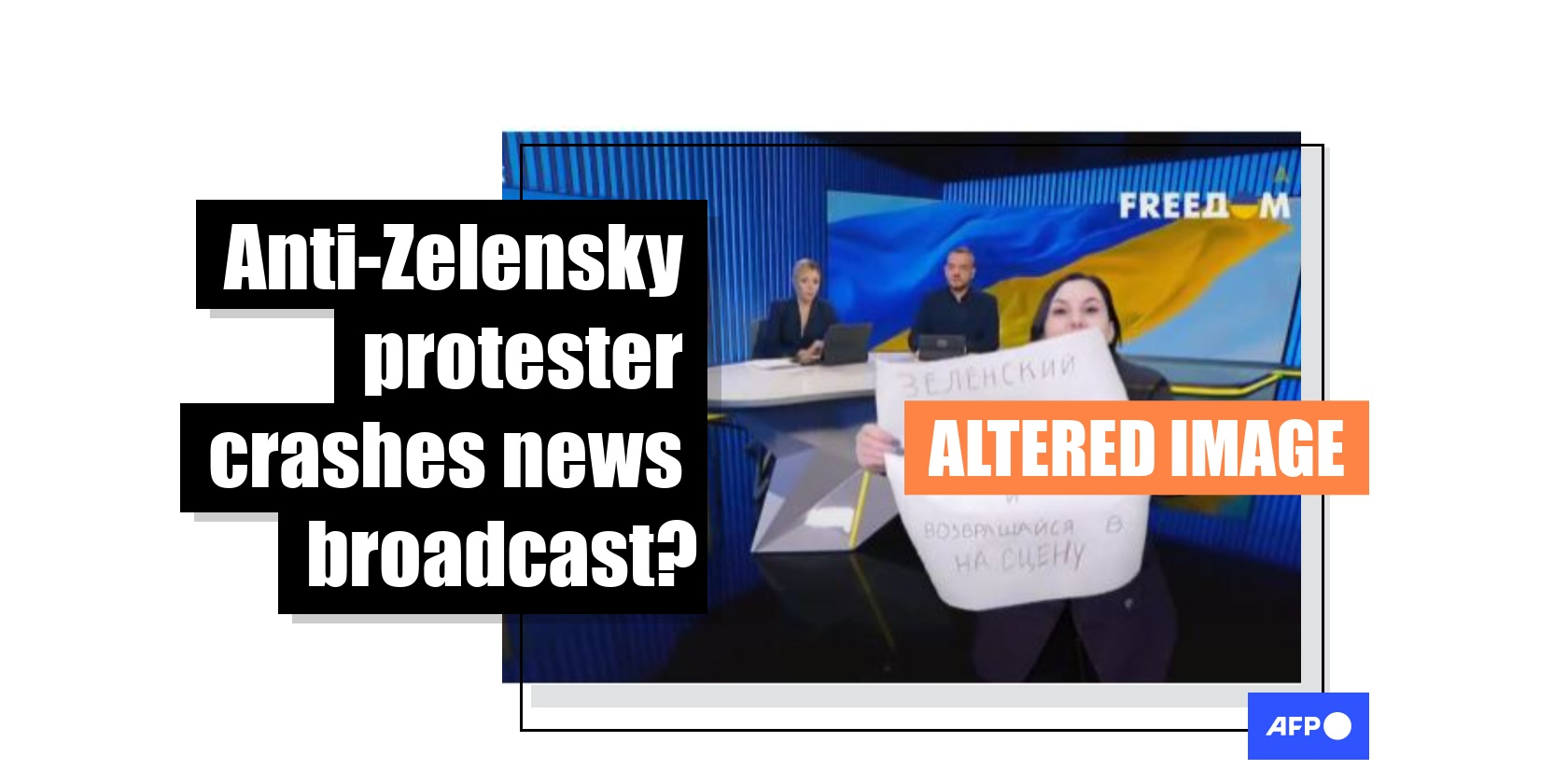 This video shows a TikTok creator using a green screen, not a protester interrupting a TV show

An image of a woman apparently bursting onto a TV set has been shared hundreds of times in posts claiming she crashed a Ukrainian news broadcast to urge President Volodymyr Zelensky to "surrender". However, the picture was taken from a video made by a TikTok creator using a green screen. The original news broadcast shows no interruption from a protester.

"After a Russian television station employee ran on camera to protest Putin, the Ukrainians have joined in the drama," reads a simplified-Chinese Weibo post from March 18.

"An employee at a Ukrainian broadcaster barged onto a news set and pulled out a sign: 'Zelensky, surrender quickly! Go back to being an actor!'"

The picture shows a woman standing in front of two news anchors, holding a placard that reads: "Zelensky surrender, quit drugs and go back to the stage".

The post appears to refer to a dissenting employee who crashed Russia's most-watched evening news programme on March 14, holding up a poster saying "No war" and condemning Moscow's military action in Ukraine.

Marina Ovsyannikova, who said she worked at Channel One as an editor, was detained and fined 30,000 rubles (260 euros) by a Moscow court. Although she was freed, she could face further prosecution, risking years in prison under draconian new laws, AFP reported.

Some social media users appeared to believe the posts showed a genuine protest on Ukrainian TV.

"We are very concerned about her situation right now," one person commented.

"I'd expect she's been 'caught up in an incident' or is inspecting a ditch somewhere," another wrote.

The same photo was shared more than 900 times in total in similar posts on Weibo here and here and Twitter here,here and here.

However, the image does not show a real-life incident.

A reverse image search of a screengrab from the posts traced it to a video posted on TikTok on March 15.

The seven-second clip was posted by a woman called Olga Stiffler, who has more than 36,000 followers and appears to be the woman in the video.

A review of the video found that her left arm appears translucent at the three-second mark, and her right shoulder at the five-second mark. 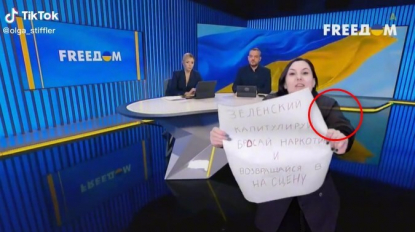 A screenshot, taken on April 5, of the TikTok video with the woman's transparent arm circled in red by AFP. 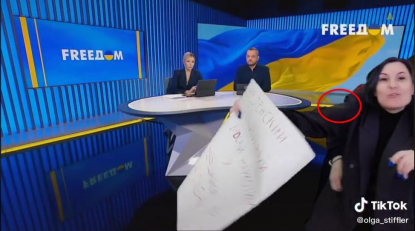 A screenshot, taken on April 5, of the TikTok video with the woman's transparent arm circled in red by AFP.

Stiffler regularly posts videos made with green screen special effects, such as here and here, including pro-Russian content.

She posted the same video and a photo of the placard on Telegram, writing in Russian: "This is a montage shot on a green screen!!!! I didn't think it looked so real."

Meanwhile, a review of the news segment from the channel Ukraine 24 did not find anyone barging on set.

Below is a screenshot comparison of the video in the misleading post (left) and the original news segment (right).

A screenshot comparison of the video in the misleading post (left) and the original news segment (right).

The Ukrainian government's Center for Strategic Communications also reacted to the video in a Telegram post.

"Fake News!! Russian fascists photoshopped an answer to Channel One," it said.