A video has circulated in Hindi-language posts that claim it shows a Sikh separatist rally in the Indian state of Punjab after an opposition party's victory there in state elections. However, the video -- viewed tens of thousands of times -- has been shared in a misleading context. It circulated online almost two weeks before the election results were announced.

The Facebook post -- shared by a user who has previously promoted the ruling Bharatiya Janata Party (BJP) on their page -- circulated after Arvind Kejriwal's left-leaning Aam Aadmi Party (AAP) displaced the incumbent Congress party in Punjab in a crushing victory.

It claims the clip shows Sikhs holding a rally for an independent homeland, called Khalistan, in India's northern Punjab state after the state election results were announced on March 10, 2022.

In the video, the crowd can be heard chanting "Khalistan zindabad" -- a reference to their desire for an independent homeland for Sikhs in India.

The post's Hindi-language caption translates to English as: “As soon as Kejriwal formed the government in Punjab, Khalistan supporters started openly rallying. Will Kejriwal be able to book them for treason?

“If the Punjab government fails to charge them for treason then the home minister Amit Shah should book Punjab’s chief minister along with Khalistan supporters.” 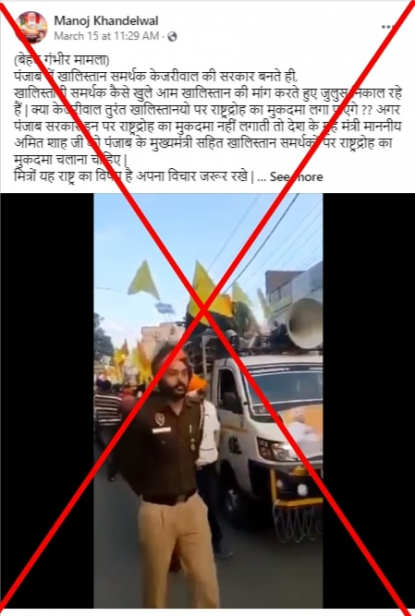 A screenshot of the misleading post taken on March 28, 2022

However, the clip has been shared in a misleading context.

A keyword search on Facebook found a longer video report published by the Indian media outlet NEWJ here on February 25, 2022 -- almost two weeks before the results of the election in Punjab were announced.

According to the report, the video shows a rally held in memory of actor and activist Deep Sidhu on February 21, 2022 in Bathinda, a city in Punjab.

Sidhu died in a road accident on February 15, 2022, the Indian Express reported.

According to India Today, Sidhu became a prominent figure during farmers’ protests against agricultural reform and would quote Sikh separatist leader Jarnail Singh Bhindranwale in speeches and on social media.

India-based VK news also shared footage from the rally on their YouTube channel.

Below is a comparison of the video shared on Facebook (left) and the video from VK news (right): 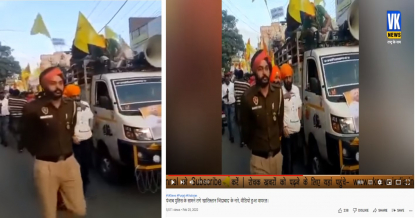 A comparison of the video shared on Facebook (left) and the video from VK news (right).

As of April 1, 2022, there have been no media reports about a pro-independence rally by Sikhs in Punjab after the AAP’s election victory there.

The founder of Punjabi outlet Radio Punjab Today, Sawarn Singh Danewalia, told AFP the video in the misleading posts shows a rally that their reporter covered and shared their own video of the event.

“The video is from a rally carried out in Bathinda after the demise of Deep Sidhu. It was held at Ghore chowk on February 21, 2022,” he said.

Below is a comparison of a placard that reads “Justice for Deep Sidhu” in the video circulated on Facebook (left) and the same placard seen in a video sent to AFP by Sawarn Singh (right): 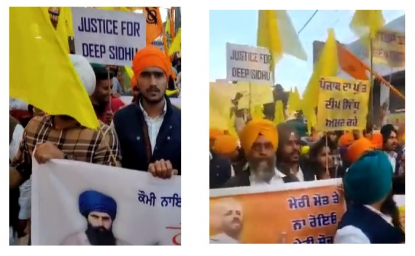