Korean-language Facebook posts have repeatedly shared a photo in March 2022 alongside a claim it shows fish killed by toxic chemicals in South Korea's Goheung County, home to the country's largest floating solar power plant. However, the photo was shared in a misleading context. It was previously published in a report about fish killed by a heat wave in South Korea's Cheonsuman Bay in 2016. Goheung County officials said their initial investigation into the deaths of a large number of fish in a freshwater lake in early March found no link to toxic chemicals.

Korean-language text overlaid on the photo translates to English in part as: "A photograph depicts the mass extinction of fish in Goheung County as a result of a toxic chemical used to clean [solar] panels in the area." 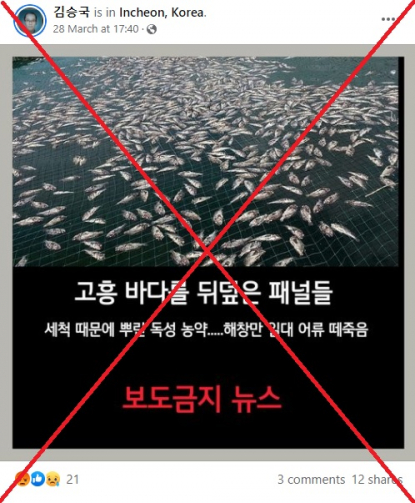 Goheung County, located at the southern tip of the Korean peninsula, is home to the largest floating solar power plant in South Korea.

The plant was completed in 2020 but its operation is the subject of strong public opposition due to pollution concerns.

Comments from some social media users indicated they were misled by the posts.

One user wrote: "It's not just that area. Other areas are also suffering, I heard."

Another user said: "What a mess. How come no media [orgnisation] reported this?"

Goheung County officials said on April 1 that early investigations had found no link to toxic chemicals after a large number of dead fish were discovered in a freshwater lake in early March.

"Samples were collected after a field investigation and specialist institutions were asked to test for toxic chemicals and other harmful elements, but nothing was found," the county said here.

"The county would conduct additional investigations to determine the cause of the fish deaths and devise measures to improve water quality management," it added.

A Google reverse search found an almost identical photo was published in a report by South Korean daily Hankyoreh on August 11, 2017.

According to the report, the photo was taken in 2016.

It reads in part: "Concerns over damage to fish farms due to rising water temperatures continue with the forecast of heat waves this summer.

"This photo shows the mass death of fish in a fish farm located in Cheonsuman Bay, South Chungcheong Province, last year. At that time, the water temperature rose to 30 degrees Celsius."

Cheonsuman Bay is located on the western portion of the Korean peninsula.

Below is a screenshot comparison between the photo in the misleading Facebook post (left) and the photo published by Hankyoreh (right):

Korean media outlets Oh My News, Yonhap News, and Kyunghyang Shinmun reported in 2016 that rising water temperatures in Cheonsuman Bay had killed fish in the area.