Skip to main content
A health worker prepares a syringe with the Pfizer-BioNTech Comirnaty Covid-19 vaccine at a vaccination center in Berlin's Humboldt Forum museum on January 18, 2022 ( AFP / John MacDougall)

Pfizer documents do not reveal dangers of Covid-19 vaccine

Social media posts and online articles have made a series of inaccurate claims about the safety and efficacy of the Pfizer-BioNTech Covid-19 vaccine, sometimes asserting the revelations come from leaks of confidential documents from the pharmaceutical company. But health regulators and independent experts say the data -- which is being officially released by the US Food and Drug Administration -- does not show the shot is dangerous or ineffective.

"Pfizer knew their vaccine would kill" is the headline of an article in The Light newspaper that was shared as a photo in posts on Instagram and Facebook in May 2022. The article claims Pfizer documents reveal "thousands of side effects that occurred at an alarming rate, which were as a direct result of taking" the Covid-19 vaccine. 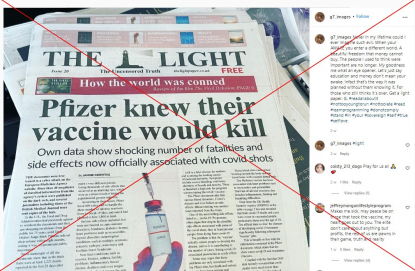 Similar misleading claims, often shared with the hashtag #pfizerdocuments, have spread across social media in multiple languages. AFP has debunked them in French, Spanish, German, Portuguese, Dutch and Serbian.

AFP examines the origin of the documents and the inaccurate claims below.

On social media, the phrase "Pfizer documents" is usually a reference to data that is gradually being made public by the US Food and Drug Administration (FDA).

A group called Public Health and Medical Professionals for Transparency (PHMPT) filed a Freedom of Information Act (FOIA) request with the FDA in August 2021 to gain access to all the data used to approve the Pfizer-BioNTech Covid-19 vaccine.

Initially, the FDA said it would release 500 pages per month, a rate considered far too slow by PHMPT as about 330,000 pages fall under the FOIA request. In January 2022, a Texas judge ruled that the FDA should release the documents at the rate of "more than 12,000 pages" on or before January 31, then "55,000 pages every 30 days" starting on or before March 1. 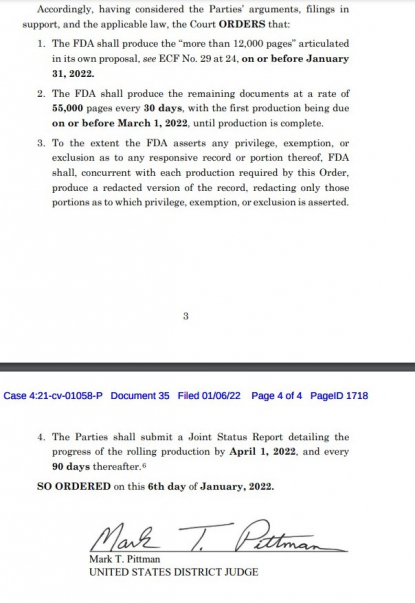 Screenshot of the January 6, 2022 ruling in the Public Health and Medical Professionals for Transparency v. Food and Drug Administration case

As of May 12, PHMPT had made 238 sets of documents available for download.

More than 5 billion people are estimated to have received a dose of a Covid-19 vaccine worldwide.

Health authorities including the World Health Organization have monitored the safety of the shot, and many independent scientists maintain that this data shows that the benefits of the jab outweigh the risks, even as misleading claims are made based on each release of documents

Multiple social media posts claim a list of dangerous side effects was identified in the documents from Pfizer.

"Pfizer side effects list release. Not a joke!" claims another. 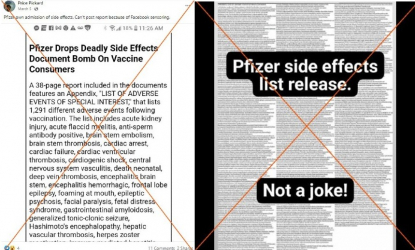 But Aurélie Grandvuillemin, deputy head of the Burgundy Regional Pharmacovigilance Center told AFP: "This is in no way a list of the adverse effects reported from the Pfizer-BioNTech vaccine."

This list, which has been available on the PHMPT website since November 2021, details "adverse events of special interest." These are conditions that must be subjected to special monitoring for reasons including their association with previous vaccines. The list includes symptoms reported following vaccination for which no causal association has been proven.

In Canada, the government is monitoring myocarditis, or inflammation of the heart muscle, and pericarditis, or inflammation of the lining around the heart. It recommends the vaccine, and has found that "the number of reports of myocarditis/pericarditis following the Pfizer-BioNTech Comirnaty Covid-19 vaccine is higher than what would be expected in the general population of males and females less than 30 years old and primarily following the second dose."

However, Glen Pyle, a professor of molecular cardiology at Canada's University of Guelph, and Jennifer Huang, associate professor of pediatric cardiology at Oregon Health and Science University in the US, wrote in The Conversation in January 2022 that, "in cases of myocarditis following Covid-19 vaccination, the vast majority of cases are mild and resolve quickly." They said there is a greater risk of heart damage from a SARS-CoV-2 infection.

AFP also has debunked claims about this list in French, German, Serbian and Dutch.

"Pfizer Data Dump Reveals More than 1200 People Died Within One Month of Taking Covid-19 Vaccine," claims a May 8, 2022 online article. 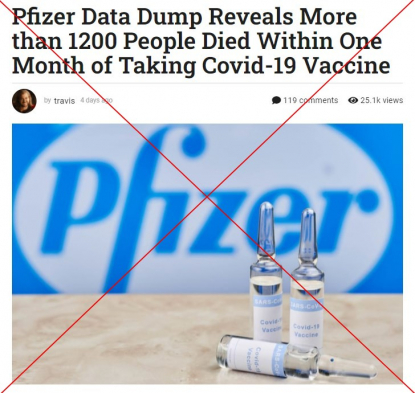 Screenshot of an online article taken May 12, 2022

The article repeats a claim AFP debunked in English and French in December 2021. It pulls information from the same document behind the claims about adverse events, not newly released data.

Pfizer spokeswoman Dervila Keane told AFP the figure of 1,223 fatalities reflects reports from sources that include health officials in several countries, without any verification of the cause. It does not indicate specific causes of death, and the fatalities may include people with "various illnesses" such as cancer or cardiovascular disease, she said.

FDA spokeswoman Alison Hunt also said health care providers must report any death following vaccination, even if it is unclear whether the vaccine was the cause.

"Reviews by FDA and CDC have determined that the vast majority of the deaths reported are not directly attributable to the vaccines," she said, adding that reports of deaths after Covid-19 vaccination are "rare."

"The next batch of Pfizer documents are out and in conclusion: The mandatory #Pfizer Vaccine was not 95% effective, only 12% effective...but only for about a week. then it drops to less than 1% effective," claims a May 5, 2022 tweet. 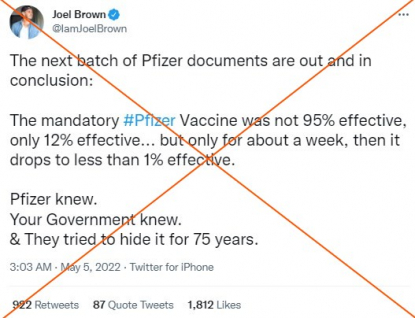 Similar claims about the efficacy of the vaccine can be found across social media in English and French.

Pfizer reported at the end of its clinical trials in November 2020 that its Covid-19 vaccine was 95 percent effective starting 28 days after the first dose.

Pfizer followed 18,198 people who received the vaccine, and 8 tested positive for Covid-19 a week after the second dose of the vaccine. This is compared to 162 people testing positive amid 18,325 people in the placebo group.

Many claims that the vaccine was only 12 percent effective can be traced to an April 3, 2022 Substack article published by Sonia Elijah, an independent British journalist who writes for Trial Site News, a website which has promoted unproven Covid-19 treatments and has criticized public health authorities.

In her blog post, Elijah claims the real vaccine efficacy should be calculated with figures on page 42 of data Pfizer shared with the FDA that has been public since December 2020. It says: "Among 3,410 total cases of suspected but unconfirmed Covid-19 in the overall study population, 1,594 occurred in the vaccine group vs. 1,816 in the placebo group."

However, researchers say it is incorrect to use this data to calculate overall vaccine efficacy because those individuals did not have Covid-19 cases confirmed by a PCR test.

The clinical trial protocols made public by Pfizer make clear that a participant was told to make an appointment for a PCR test if they experienced certain symptoms, including fever, cough, shortness of breath, sore throat or loss of taste/smell.

Jeffrey Morris, director of biostatistics at the Perelman School of Medicine at the University of Pennsylvania, explained on his website that the 3,410 "suspected but unconfirmed" cases were people who had "any symptom mentioned in the list, which of course could come from many causes not just Covid-19 infections."

He said: "Since obviously the SARS-CoV-2 vaccine was not intended to prevent all coughs, fevers, chills, sore throats, muscle pain, shortness of breath, vomiting, etc., from any cause, it would be ridiculous to include all reports of such common symptoms as Covid-19 cases for the purpose of computing Vaccine Efficacy."

"Remember, 'The vaccine is safe for pregnant women'- let me introduce the paperwork dumped by Pfizer, 50k pages. Now we know why they wanted to keep this hidden for 50+years," says a May 4, 2022 tweet.

The post includes an image of vaccine guidance, underlined to highlight: "COVID-19 mRNA Vaccine BNT126b2 is not recommended during pregnancy." 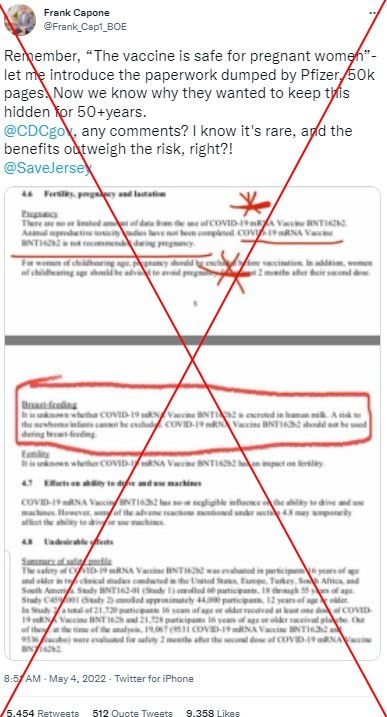 As explained in a previous fact-check, this document was not released by the FDA. Instead, it is vaccine guidance published for UK health professionals in December 2020.

A spokesperson for the UK's Medicines and Healthcare products Regulatory Agency (MHRA) confirmed the origin of the document, and that it does not reflect the current vaccine guidance.

Victoria Male, a lecturer in reproductive immunology at Imperial College London, told AFP on May 10, 2022: "Because pregnant individuals were not included in the clinical trials, for the first few weeks of the UK's vaccine rollout, it was not offered to them. However, from 1 January 2021, in recognition of the fact that Covid can cause severe disease in pregnancy, including preterm birth and stillbirth, we extended vaccination to pregnant people at high risk."

Health officials in the UK, US, France and Canada recommend the Covid-19 vaccine for pregnant individuals.

Transmission of the virus

"New Study & Confidential Pfizer Docs. prove COVID 'Vaccine Shedding' has been and still is occurring with dangerous consequences," says the headline of a May 10, 2022 article from The Exposé, a website with a history of circulating inaccurate health information.

It claims: "A confidential Pfizer document had already confirmed exposure to the mRNA injections was perfectly possible by skin-to-skin contact and breathing the same air as someone who had been given the Covid-19 jab." 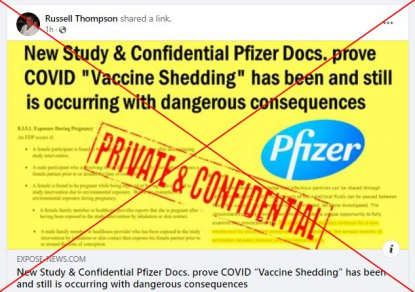 This claim is false, as AFP has previously reported.

The US Centers for Disease Control and Prevention (CDC) explains on its website that the Moderna and Pfizer-BioNTech shots "are mRNA vaccines that do not contain the live virus that causes Covid-19 and, therefore, cannot give someone Covid-19."

This is how mRNA vaccines work:

Dasantila Golemi-Kotra, a microbiologist at Canada's York University, also confirmed that vaccinated individuals are not infecting others.

"No spike protein gets shed when we get vaccinated," she said.

Find all of AFP Fact Check's reporting on the coronavirus pandemic here.