A nurse draws a dose of the Moderna Covid-19 vaccine before administering it in Toronto, Ontario, Canada, March 26, 2021. (AFP / Cole Burston)

Covid-19 vaccine does not make people dangerous to others

Social media posts claim that people vaccinated against Covid-19 pose a health risk to those who have not been immunized by “shedding” spike proteins. But experts say this is impossible, and that there is also no proof for the claim that the shots affect fertility.

“Stay Away From Them,” says an April 19, 2021 video post on Instagram by a woman who presents herself as a nurse. 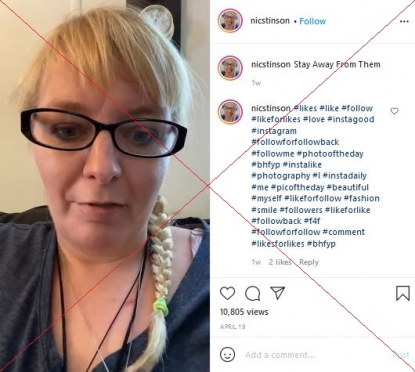 The video has also been shared on Facebook, Rumble and BitChute.

Similar claims have been circulating on social media, and a Florida private school barred teachers who have been vaccinated against Covid-19 from coming into contact with students, citing misinformation about the shots as justification.

Businesses in Canada also barred entrance to people who were inoculated.

More than 235 million Covid-19 vaccine doses have been administered in the United States. Most were Pfizer’s and Moderna’s mRNA vaccines, though a shot from Johnson & Johnson that employs a different technology is also being used.

Below, AFP Fact Check examines some of these inaccurate claims.

“There are a bunch of videos going around about how being around people who have had the, we’ll call it ‘bax,’ are now experiencing severe symptoms and this is from shedding off of the spike proteins,” the woman says in the video.

But there is no evidence to suggest that they do, according to Jamie Scott, professor emerita at the Simon Fraser University Faculty of Health Sciences.

“In fact, it’s an impossibility, since all of the vaccines cause cells to produce only the spike protein, and no other components of the virus. So there’s no way the virus can be produced by the vaccine,” she told AFP in an email.

The US Centers for Disease Control and Prevention (CDC) explains on its website that the Moderna and Pfizer-BioNTech shots “are mRNA vaccines that do not contain the live virus that causes Covid-19 and, therefore, cannot give someone Covid-19.”

The mRNA shots are the first to be authorized and distributed globally that use the cutting-edge messenger ribonucleic acid technology, which differs from that of other vaccines.

Instead of confronting the immune system with part of a virus in a weakened or deactivated form to build antibodies, it introduces a “blueprint” of the spike protein, part of the virus that the body can then recognize and fight if it encounters it later.

This is how mRNA vaccines work:

Dasantila Golemi-Kotra, a microbiologist at York University, explained in an email that “no spike protein gets shed when we get vaccinated.”

Calling this claim “skewed science,” she said that “even if the spike protein was shedding, although impossible, this protein cannot infect someone else.”

She added: “Proteins are sticky molecules and highly unstable (structurally and remaining as a single piece). If it is digested it will be destroyed by the low pH in our stomach and the enzymes there, and if it is stuck in our skin or enters our mouth or eyes or nose it is very likely to be digested by the enzymes secreted by our cells on these environments.”

This was confirmed by Barry Pakes, assistant professor at the Dalla Lana School of Public Health at the University of Toronto. He explained in an email that “there is absolutely no evidence whatsoever of shedding of spike protein in vaccinated individuals, nor is it even theoretically possible.”

The woman in the video also argues that the mRNA vaccines are causing “reproductive problems” and “sterilization.”

There is at this point no indication that Covid-19 vaccines negatively impact women’s reproductive health, according to multiple experts and public health bodies.

The CDC says that “there is currently no evidence that any vaccines, including Covid-19 vaccines, cause fertility problems.”

In a joint statement, the American College of Obstetricians and Gynecologists, the American Society for Reproductive Medicine and the Society for Maternal-Fetal Medicine also said that “there is no evidence that the vaccine can lead to loss of fertility.”

While fertility was not specifically studied in clinical trials of the vaccine, the statement explains that “no loss of fertility has been reported among trial participants or among the millions who have received the vaccines since their authorization, and no signs of infertility appeared in animal studies. Loss of fertility is scientifically unlikely.”

Golemi-Kotra warned that most of the accounts shared on social media have not been peer-reviewed by scientists and doctors, and there are “no such reports in any reputed scientific media.”

Pakes added that “there are now over one billion doses administered, 230 million in the US alone. If this were at all plausible we would see a huge epidemic of bruising people, stillborn fetuses or amenorrheic women. We are seeing none of that.” 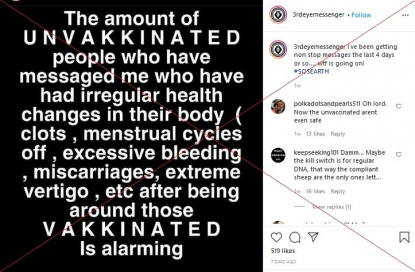 Research is underway to determine if there is a causal relationship between the two. Some experts suggest that the added stress of the pandemic could play a part in cases in which women experienced menstrual changes.

Kathryn Clancy, associate professor in the Department of Anthropology at the University of Illinois Urbana-Champaign, is leading research on the possible causal links between Covid-19 vaccines and menstrual cycle changes.

She said by email that multiple biological mechanisms might underlie menstrual changes with vaccination, including “changes in platelets, inflammatory processes, and vasodilation, all normal immune activation responses that you want to see with vaccination.”

“So menstrual changes are not concerning, but rather short-term side effects that are similar to sore arm, fatigue, fever,” she added.

Some posts also raise concerns about the possible risks to pregnant women from the Covid-19 vaccines and their purported shedding.

While scientific evidence is still scarce because pregnant women were excluded from the initial clinical trials, in February 2021 Pfizer-BioNTech started a study to assess the safety of their vaccine in pregnant women.

The CDC states on its website that “based on how these vaccines work in the body, experts believe they are unlikely to pose a specific risk for people who are pregnant.”

In fact, Golemi-Kotra and Pakes emphasized that pregnant women should get the shots because women are at a higher risk for the worst outcome from a Covid-19 infection.

The video repeats the recurring claim that Covid-19 mRNA vaccines can change a person’s DNA. This is false; mRNA shots are not gene therapy and cannot alter a person’s genetic makeup, according to experts.

Grant McFadden, director of the Biodesign Center for Immunotherapy, Vaccines, and Virotherapy of Arizona State University, previously said that it is inaccurate to call mRNA vaccines “gene therapy” because “they do not change the genetic DNA of the host cells, and cannot alter the genes of the recipient’s cells.”

The CDC also states on its website that “mRNA vaccines do not interact with a person’s DNA or cause genetic changes because the mRNA does not enter the nucleus of the cell, which is where our DNA is kept.”
Golemi-Kotra explained that “no vaccine will alter the human make-up of the body.”

The woman in the video further claims that “there’s no way of knowing how long that it lasts… if the human body will ever shut off this mechanism of producing these spike proteins, so the people that get the ‘shmaccine’ may produce these spike proteins forever so it may never be safe to go near them again.”

This is false; mRNA from vaccines cannot survive long-term in the human body and thus cannot replicate indefinitely, according to experts.

Jeffrey Cirillo, regents’ professor of immunology at the Texas A&M College of Medicine, previously said that “the body is a natural off switch for any mRNA. There are enzymes in the body that degrade mRNA all the time.”

And although our immune response will remember seeing the virus protein, “there will not be any mRNA or protein from the virus after a few days,” he said.

Scott explained that “the current vaccines only promote the production of spike protein for a short period, regardless of the vaccine.”

“There’s no biological mechanism for any of the vaccines to produce spike protein indefinitely,” she added.