Skip to main content
Indonesian navy patrol boat KRI Raden Eddy Martadinata 331 departs from the naval base in Banyuwangi, East Java province, on April 25, 2021, heading to the site where missing Nanggala 402 submarine from has been found. (AFP / Sonny Tumbelaka)

YouTube clips viewed hundreds of thousands of times claim that Indonesia has salvaged the wreckage of a submarine that sank in April 2021, with the loss of all 53 people aboard. The claim is false. As of April 29, 2021, there are no credible reports that the wreckage of the submarine has been salvaged. An expert told AFP that it could take around two months to successfully lift the wreckage, which is at a depth of more than 800 metres.

The thumbnail of the video shows text that says: “Amazing!!! Strong magnet detected! Moments when KRI 402 is salvaged”. 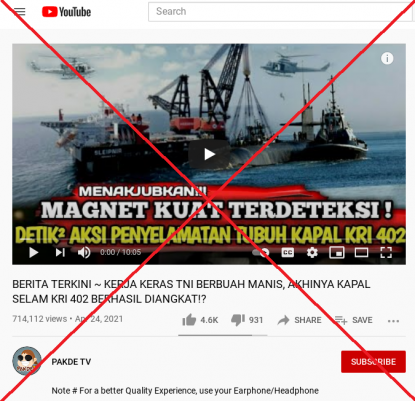 The Indonesian military announced on April 25, 2021 that the KRI Nanggala 402 submarine had been found more than 800 metres below the sea surface after being missing for four days, AFP reported here. The vessel had broken into three pieces, with all 53 crew members aboard confirmed dead.

The claim that the wreckage of the submarine was salvaged has also appeared elsewhere on YouTube, such as here, here and here.

While the footage in the misleading posts includes news clips of the sunken submarine taken from Indonesian TV stations, it does not include any scenes showing a submarine salvage operation.

Indonesian authorities have warned that any salvage operation would be risky and difficult in the deep waters, AFP reported here.

“We are still discussing how to lift [the wreckage] because it is very deep,” Rear Admiral Muhammad Ali of the Indonesian navy said in a press conference on April 27, 2021.

As of April 29, 2021, there are no credible reports that the wreckage of the submarine has been salvaged.

Submarine expert Wisnu Wardhana, from Sepuluh Nopember Institute of Technology in the Indonesian city of Surabaya, told AFP it is very difficult to lift the wreckage from deep waters, and estimated it could take “around two months”.

“We are facing high hydrostatic pressure,” he told AFP in a telephone interview on April 28, 2021, adding that even professional divers could only dive 50 metres underwater at most.

“That is why we know now that the Nanggala is split into three parts because the structure is broken and compressed with high pressure,” he said.

AFP has previously debunked a false claim that all of the 53 crew members aboard the submarine survived.