Skip to main content
The Indonesian navy patrol boat KRI Singa 651 prepares to load provisions at the naval base in Banyuwangi, East Java province, as the military continues search operations off the coast of Bali for the navy's KRI Nanggala 402 submarine that went missing. (AFP / Sonny Tumbelaka)

Social media posts claim that all crew members of an Indonesian navy submarine that went missing on April 21, 2021 were found alive one day later. This claim is false: Indonesia’s military confirmed all the submarine’s crew members died after the remains of the destroyed submarine were discovered on the seafloor in waters off Bali on April 25, 2021. 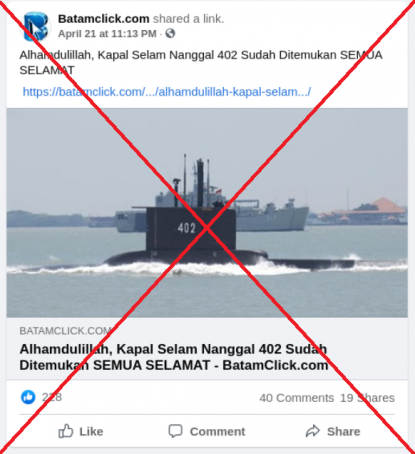 The post’s Indonesian-language caption translates to English as: “Praise be to God, Submarine Nanggal 402 Has Been Found ALL SURVIVE.”

The Indonesian navy lost contact with the KRI Nanggala 402 submarine during a naval exercise off the coast of Bali on April 21, AFP reported here. There were 53 crew members on board when the vessel went missing.

A similar claim, that the vessel was found less than 24 hours after it went missing, was shared on Facebook here and here; on Twitter here; and in blog posts here, here and here.

The Indonesian military announced all the submarine’s crew members had died after rescue teams located parts of the missing submarine more than 800 metres below the sea surface on April 25, 2021. AFP reported on the news here.

“There were parts of KRI Nanggala 402 — it was broken into three pieces,” said Navy Chief of Staff Yudo Margono.

Indonesian armed forces chief Hadi Tjahjanto said that “all 53 personnel onboard have passed”.

The news was also reported by Indonesian media, including Kompas.com and Tempo.co.