A video has been viewed hundreds of thousands of times in Facebook and Twitter posts claiming they are evidence that the pandemic is a hoax. The claim is false. The video features various short clips which have been taken out of context, and actually show events such as protests, music videos and news reports.

It features seven clips and one picture showing various images, from people wearing personal protective equipment (PPE) and body bags to a hospital and funeral. 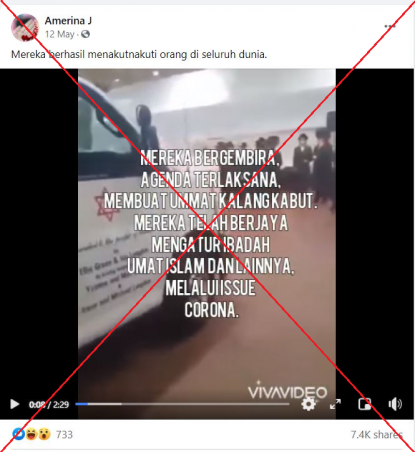 “They managed to scare people all over the world,” the post's Indonesian-language caption reads.

The text superimposed on the video reads: “They are happy. The agenda has succeeded. Making people confused. They have succeeded in controlling the religious worship of Muslims and others through the corona issue”.

The same video has been viewed several more thousand times in similar Facebook posts here, here and here; and on Twitter here.

The video was also shared alongside a similar claim in Malaysian, Spanish and Romanian.

The Hebrew caption translates as: “People dressed in hazmat suits arrived at a wedding in an ambulance, and started dancing. What exactly happened there?”

“Below is the response from Magen David Adom, the emergency medical service that owns the ambulances, saying that the incident was ‘severe’ and that only the ambulance driver was actually part of the organisation, and the others took the hazmat suits from a medical facility that was also not connected to MDA. The driver was not on duty and reprimanded for the incident”.

“Bodies” on the street: a protest in the US

The second image shows black bags lined up in the street, along with a teddy bear and wreaths. The post claims it shows body bags that are in fact filled with rubbish, suggesting that the pandemic is a hoax.

The photo was originally published on the European Pressphoto Agency (EPA) website on May 27, 2020, with the title: “Symbolic funeral procession to protest against the economy reopening without Coronavirus relief in Miami.”

The caption reads in part: “An activist carries bags, representing dead bodies during a symbolic funeral to protest against the economy reopening without Coronavirus relief in the Torch of Friendship Park, in Downtown Miami, Florida, USA, 27 May 2020.”

AFP also published a picture showing the protest here on May 27, 2020.

From the protest picture, the scene changes into a clip of two people wearing PPE standing next to an ambulance, apparently posing for a photographer. The text superimposed on the clip reads: “It’s all for the cameras. The greatest fraud in human history.”

A reverse image search found a tweet explaining that the clip shows a photographer for Dutch newspaper NRC taking photos of ambulance personnel. The report was published here on March 4, 2021.

NRC followed paramedics working during the pandemic in Amsterdam. The journalist describes witnessing a bystander who shouted “fake news” during a photo session when the paramedics were wearing PPE.

The fourth image shows a man smoking a cigarette as he lies on a pile of black bags. The post claims that the “bodies” in the bags are in fact alive.

The video actually shows behind-the-scenes footage from the shooting of a music clip for the song “Never, Ever” by Russian rapper Husky, which was released in September 2020. The clip corresponds with this footage uploaded on TikTok by the music video's production director Vasya Ivanov.

The music video’s director Evgenii Bakirov said that the video “is a figure for internal struggles of an artist who is cleaning up his mental world”. There is no reference to the coronavirus pandemic in the music clip.

Filming in a hospital: a promotional video

In the following sequence, which is repeated twice in the misleading video, a photographer and cameraman are seen inside a hospital, surrounded by hospital beds and patients. A man is also seen giving directions to medical personnel wearing PPE.

The text superimposed on the footage claims that scenes of hospitals apparently overwhelmed with Covid-19 patients are in fact staged. However, AFP found that the clip is actually an advertisement for Shamir Medical Center in Israel.

The promotional video was posted here on the hospital’s YouTube channel on March 26, 2021. Translated from Hebrew to English, the video’s titled: “Shamir Medical Center as never seen before in a photographic summary of 2020: the year of the coronavirus”.

Liad Aviel, spokesperson for the medical center in Tel Aviv, said that the clip corresponds to the hospital rooms and was filmed in a bid to promote its facilities.

Aviel said a hospital employee had filmed the scene and shared it on Facebook. “Unfortunately, it became fake news, but we have nothing to do with it,” he told AFP on March 11, 2021.

The next sequence shows a short clip of black body bags outdoors next to a building, followed by another clip showing people standing around black bags. Text overlaid on the videos indicates that the people are working to prepare the “dead bodies”.

The two clips were taken at separate events at different locations in the Venezuelan capital, Caracas, but are combined to give the impression that they show the same scene.

The first part of the sequence matches this video posted by exiled Venezuelan news site ContraPoder on its YouTube channel on April 7, 2021. The video was also published in this ContraPoder report on the same day, which explains it shows bodies waiting to be transported by a truck.

Exiled Venezuelan digital news programme Hasta Que Caiga La Tirania published a video on its YouTube channel on April 7, 2021, showing scenes that correspond with the clip in the misleading Facebook post, which can be seen at the 3:08 mark.

According to both media reports, the video was filmed in La Yaguara district in Caracas, and shows the collapse of the health care system in Venezuela, where the morgues are overwhelmed by bodies of Covid-19 patients.

The next clip shows students staging a protest in front of the Caracas University Hospital, more than 10 kilometers from La Yaguara, on April 6, 2021.

The demonstrators filled big black plastic bags with paper and placed them in front of the hospital to symbolise the 430 health care workers who had died from Covid-19 as they protested the slow progress of vaccine distribution, Venezuelan newspaper El Nacional reported on April 6, 2021.

The protest was covered by Venezuelan journalist Esteninf Olivarez, who posted several videos on Twitter, including this video on April 6, 2021, which resemble the misleading clip.

Gravediggers: a news report in Brazil

The last clip shows a man wearing protective gear digging a grave while being filmed by a cameraman. The post claims the gravedigger never finished the burial as there were never any Covid-19 victims.

The film actually shows journalists reporting on the work of gravediggers during the pandemic in Espirito Santo, a state in southeastern Brazil. The report was posted on Vimeo here by Brazilian media outlet Folha Vitoria on March 31, 2021.

The journalist behind the report, Marla Bermudes, denied that the clip showed a fake burial, here on April 1, 2021.

“The cameraman Wilian O’brien and I were recording images to explain the work of the gravediggers and the activities they carry out,” she said. “The report was intended to pay tribute to the work of these professionals and did not [represent] that the gravedigger in question was simulating the opening of a grave or pretending to bury someone.”

“The tomb was open and not at the request of our team. That is already a cemetery procedure. The images that are shown at the exact moment when he is throwing dirt, were supporting images to illustrate the activities he was carrying out.”

Rede Vitoria, the communication group which represents Folha Vitoria, said here on April 2, 2021: “To put together the report, our reporters recorded the step-by-step work [of the gravediggers]. The recorded [misleading] video decontextualises the moment, distorts the facts and creates a lying narrative”.