Skip to main content
A person holds a transgender pride flag during a rally to mark the 50th anniversary of the Stonewall Riots, a turning point in the LGBTQ community's struggle for civil rights, in New York on June 28, 2019 (AFP / Angela Weiss)

Facebook posts are misleadingly sharing a 2018 photo that shows two teen wrestlers, to claim that transgender athletes are “just boys beating up on girls.” But one of the athletes in the picture, Mack Beggs, a trans male athlete, was not allowed to compete in the boys’ wrestling division at the time due to state rules, and he is shown employing a classic wrestling move, not “beating up” his opponent.

“Just an excuse to take advantage of women by weak men who couldn't cut it as a man,” an April 14, 2021 Facebook post reads. It is accompanied by the photo and a caption that says,“They are not ‘courageous transgender athletes’. They are just boys beating up on girls.” 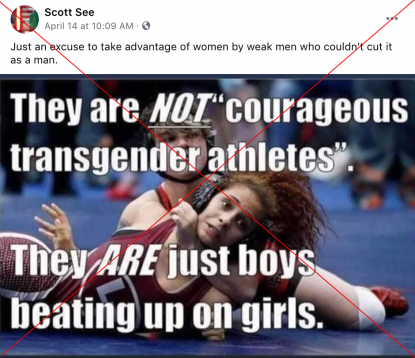 Other examples of the claim can be found on Facebook here, here or here.

Through a reverse image search on Google, AFP found the original photo was used in local news articles, here and here. It shows Mack Beggs (top) wrestling Elyse Nelson (bottom) “in the 110-pound girls division during the 6A Region II wrestling meet at Allen High School in Allen, Texas.” The photo was taken on February 16, 2018 by photographer Jae S. Lee.

Beggs, from Euless, Texas, explained the context of the picture to AFP by phone.

In 2018, the University Interscholastic League’s rules did not allow him to compete in the boys’ division of his high school wrestling tournaments. For four years, Beggs wrestled against girls, including when this photo was taken.

“They still have the rules in place now,” he said. According to those regulations, “whatever you identify as, doesn’t matter, whatever is on your birth certificate does.”

“I pass so well that people are mistaking me for being a trans woman rather than a trans man. They’re trying to use me for their political agenda or their beliefs,” Beggs, 22, added.

“People think that I am choking her out in the photo but it’s really just an actual move in wrestling... I always use that move because it’s effective, as you can see in the photo,” which was taken during a regional match, he said. Beggs added there was no animosity against his opponent, Nelson. “I am friends with her,” he said.

Gary Abbott, director of communications at USA Wrestling, described the move. “The athlete on top has secured an arm bar, and has hooked the opponent’s head,” he said in an email.

The posts circulated as dozens of bills have been introduced to attempt to bar transgender youth, and mostly females, from participating in sporting events.

On April 14, 2021, the Texas Senate passed a bill that would prevent public school students from participating in sport competitions if their sex assigned at birth does not align with the team’s designation. Companion legislation in the House, however, was expected to die.

Beggs “didn't lose a match in his last two years of high school, and it wasn't really fair that he won two Texas state championships,” said Joanna Harper, author of the book, “Sporting Gender: The History, Science and Stories of Transgender and Intersex Athletes.”

The NCAA (National Collegiate Athletic Association) supports the inclusion of transgender student-athletes undergoing hormonal treatment for gender transition under certain conditions, including the participation of transgender women to compete in the women's category after one year of hormone therapy.

Beggs said he is frustrated with “people taking my picture and thinking it’s something else,... not even wanting to understand or do the research to see what’s actually going on” in the photo. He said he hopes for a change of narrative around these questions.

AFP also debunked false claims that a photo showed a 50-year-old man who identifies as a teenager and was playing basketball in a female league.