Plywood price up due to high construction demand, not protests

Social media posts claim plywood is expensive because it is being used to protect storefronts during protests. This is false; experts say the price of the material is up due to high demand for use in construction combined with supply limitations.

“The real reason plywood is so expensive right now!” says an April 21, 2021 Facebook post featuring an image of people using it to cover storefronts. 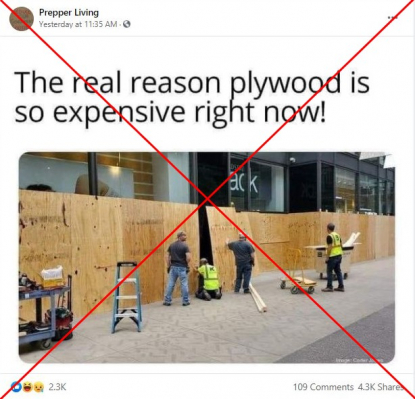 The United States has seen frequent protests over the past year against racism and police violence. While largely peaceful, there has been looting and other unrest during some demonstrations, leading business owners to install protective barriers at their stores.

But that is not the cause of the rise in the price of plywood.

“In terms of lumber, prices are about three times where they were a year ago. This has nothing to do with people buying lumber to protect shops from rioting/looting,” Paul Jannke of Forest Economic Advisors (FEA), which specializes in analysis and information on American wood products, told AFP by email.

“Rather, it is because of a combination Covid-19-induced supply side constraints and strong demand as residential construction is at its highest level since before the Great Recession,” he said.

FEA Vice President Greg Lewis confirmed that the same factors have influenced the price of plywood, saying in an email that the current situation is due to “strong product demand that has outpaced supply since markets started to recover in May 2020.”

“Strong demand for new construction and remodeling has pushed lumber, and other building materials, higher over the past year,” Dietz said by email.

More than 30 organizations involved in housing and commercial construction called for action by US Department of Commerce Secretary Gina M. Raimondo in a March 12 letter, highlighting the ramifications of the high prices.