This image of a woman transporting an oxygen tank was taken in Bangladesh, not India

A photo has been shared thousands of times on Facebook and Twitter alongside a claim it shows a Covid-19 patient in India transporting her own oxygen tank by motorcycle. The posts were shared as India's coronavirus infection rates soared to record levels, resulting in shortages of oxygen and hospital beds. The claim is false: the photo was taken in Bangladesh.

Its Hindi-language text overlay translates to English as: “Bihar: Photo from Patna. This photo is heart-wrenching which emerged from Patna and exposes the claims of medical apathies in the state. The Nitish government doesn’t even have the ambulance that a patient is being ferried with oxygen on a motorcycle.”

Patna is the capital of the east Indian state of Bihar, which is governed by chief minister Nitish Kumar. 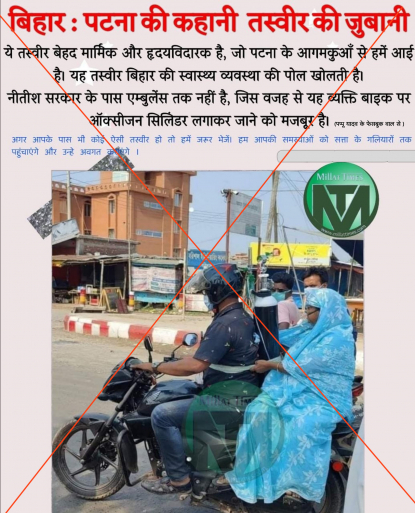 A screenshot of the misleading post taken on April 23, 2021.

The post circulated online as India's healthcare system, home to 1.3 billion people, was stretched to the limit by a record number of daily Covid-19 infections, AFP reported.

The photo was shared more than 2,000 times after it was posted here on the Facebook page for Indian politician Rajesh Ranjan on April 19, 2021.

The same photo was also shared alongside a similar claim here and here on Facebook; and here on Twitter.

The claim is false: the photo was taken in Bangladesh.

A reverse image search found the photo appeared in this report published by The Daily Star, a Bangladeshi news website, on April 18, 2021.

The photo is captioned: “A man in Barishal yesterday had to carry his Covid-19 infected mother on his motorbike with an oxygen cylinder tied to his back.”

Barishal -- also spelled Barisal -- is a district in south-central Bangladesh.

A signboard is visible in the photo with a Bengali-language text that states: “Barisal Engineering College”.

Below is a screenshot comparison of the photo in the misleading posts (L) and the photo in Daily Star report (R) with the signboard highlighted in red: 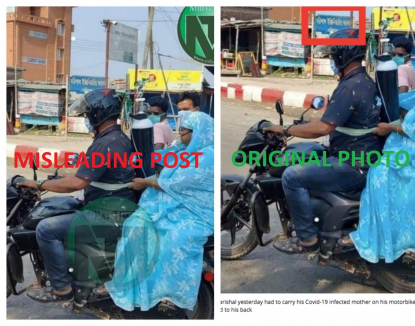 The photo was uploaded one day earlier here on Facebook. It was posted by Facebook user Touhid Tutul, who lists himself on his profile as a police officer.

In a Facebook message on April 26, 2021, Tutul told AFP: "The photo was taken by me in Barisal, Bangladesh."

The photo also corresponds with an image tagged in this street in Barisal, Bangladesh on Google Maps.

Below is a screenshot comparison of the photo in the misleading posts (L) and the image of the same street tagged on Google Maps (R): 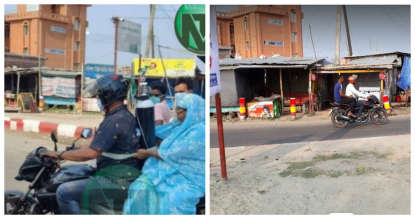