One of the images shows the Nigerian city Lagos, not Uganda's capital Kampala

Two photos in a Facebook post have been shared hundreds of times alongside a claim that they show the state of roads in Uganda’s capital Kampala “before 1985” and today. But the claim is misleading; the first photo shows a road in Lagos, Nigeria in 1965. The second one was taken during flooding in Kampala.

The post with the photos was published here on Facebook on April 15, 2021, and has been shared nearly 300 times. 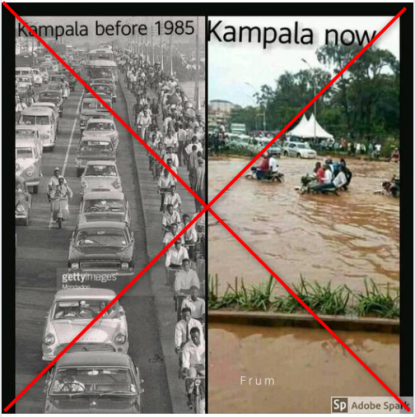 The text superimposed on the photos claims that they show the state of roads in “Kampala before 1985” and today, while the post’s caption reads: “RIP IDI AMIN DADA your history remains.”

The post has been published on a Facebook page dedicated to the late Uganda dictator Idi Amin who ruled the east African nation between 1971-79. He was ousted from power in 1979 and died while in exile in Saudia Arabia in 2003.

Comments on the post suggest that Kampala had better roads under Amin than under his successor Yoweri Museveni, who is one of Africa’s longest-serving presidents.

“Banyarwanda came to destroy all that Amin did for his country (sic),” reads a comment shared in the post.

The Banyarwanda are ethnic Hutus and Tutsis from neighbouring Rwanda. Kampala-based journalist Andrew Aranaitwe told AFP Fact Check that “Ugandans, especially those who lean towards the opposition, often refer to president Museveni as a Banyarwanda (an outsider).”

Another comment under the misleading post says: “Before 1986 there were no reconditioned cars driven in Uganda. People drove brand new cars and I don’t know whether this country is moving forward or not.”

A Google reverse image search showed that the first photo was originally published by Getty Images and shows a road “filled with cars” in Lagos, Nigeria in 1965.

AFP Fact Check found that the second image has circulated online since at least 2019. It was shared by Ugandan politician Kifefe Kizza-Besigye on Twitter in October 2019 to highlight flooding issues in Kampala.

The photo was also published in this online article about flooding in Kampala on a website called View Uganda.

A closer look at the image shows a white van with blue dotted lines - typical of Ugandan public taxis.

In its search, AFP Fact Check came across this video posted by Ummah Islamic Magazine Uganda, a Kampala-based publication.

The clip shows the same flooded street as seen in the picture in the misleading post.

Contacted by AFP Fact Check, the magazine confirmed the footage was captured in April 2018 on the Queens Clock Tower street in Kampala - the same place where the photo was taken.

A side-by-side comparison shows the same visual elements in the video and photo, including the tent stand, raised curb, and white building in the background. 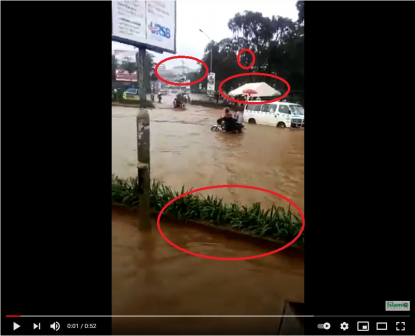 An image from the video showing the tent, the white building, and a section of the road covered with grass saved on April 26, 2021

Using Google Maps, AFP Fact Check geolocated the tower seen in the video. The first image shows the tower in the footage, while the second one is the Google Maps view.

Side by side images showing the tower saved on April 26, 2021

AFP Fact Check was unable to identify the exact date when this photo was taken. We invite anyone who has more information concerning this photo to email us: FactCheckeditorsAfrica@afp.com.