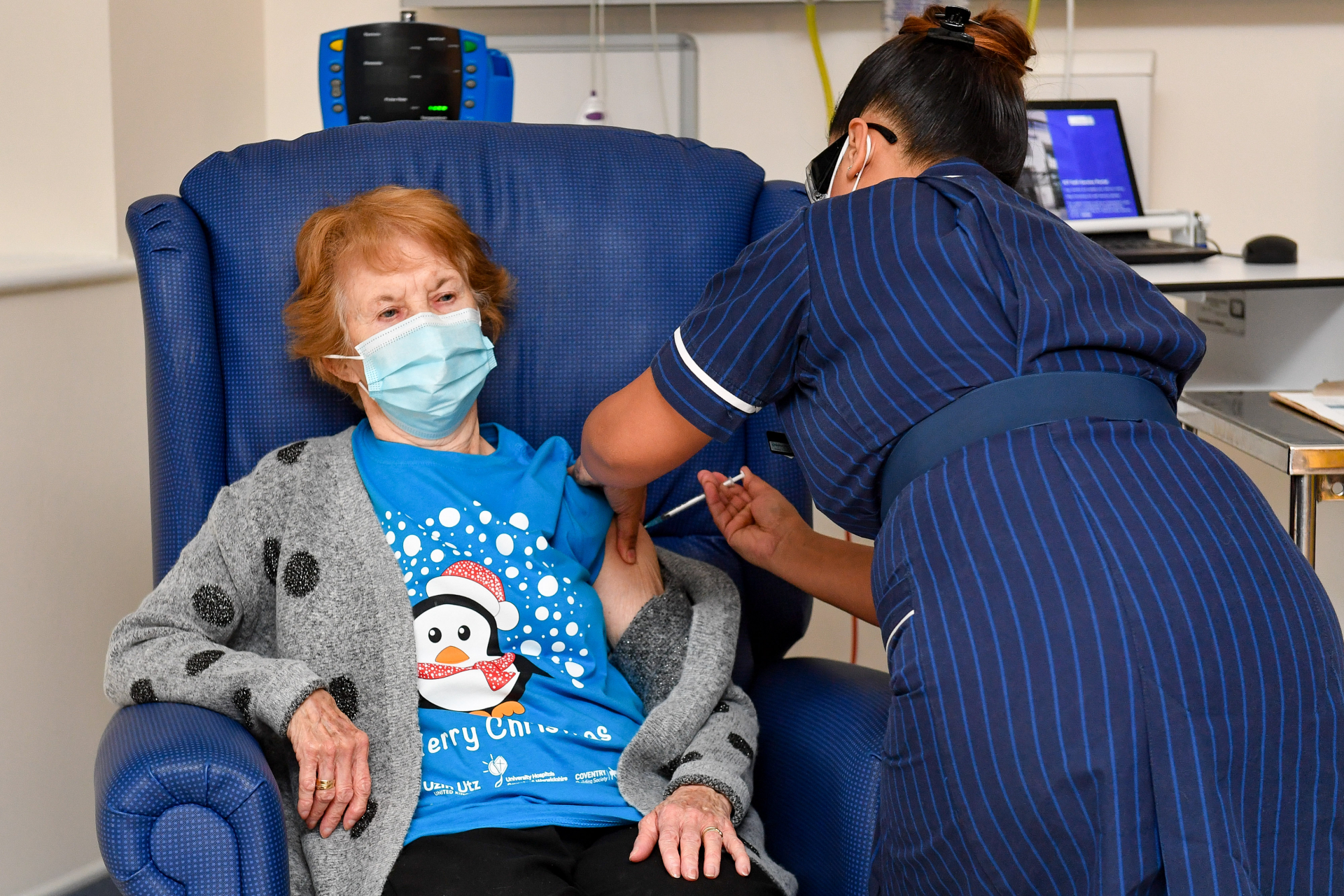 Margaret Keenan becomes the first person in the world to be given the Pfizer-BioNTech Covid-19 jab as part of a mass vaccination programme, in Coventry, England on December 8, 2020 (Photo by Jacob King / POOL / AFP)

As Britain became the first Western country to roll out a mass coronavirus vaccine campaign, articles surfaced claiming various high-profile figures like Bill Gates and Robert F Kennedy Jr had warned the jabs can change a person's DNA. This is false; while vaccines send genetic instructions to the body, these disappear quickly and do not alter your DNA.

“Avoid the Corona vaccine at all costs,” reads the headline on a December 7, 2020 article on Strange Sounds, a site about “amazing, weird and unexpected phenomena”. It has circulated online since at least May 2020. 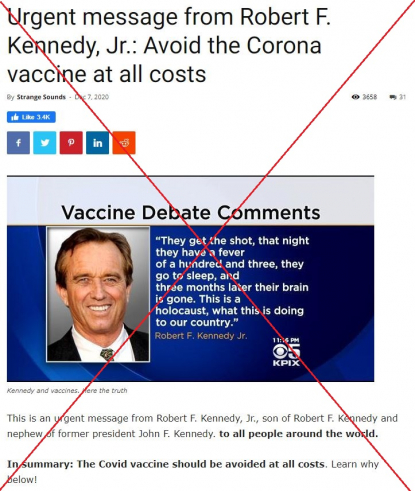 Screenshot of article taken on December 9, 2020

The story warns the jab causes “genetic damage” that is “irreversible and irreparable”.

“The so-called mRNA vaccines of the latest generation intervene directly in the genetic material of the patient and therefore alter his individual genetic material, which represents genetic manipulation,” it claims.

The same text has circulated on Facebook around the world, including Britain, South Africa and the US, while posts in France allege vaccines risk “permanently transforming our genes” and “passing these genetic modifications on to our children”.

The claim was also shared by a political party in New Zealand, as AFP Fact Check investigated here.

While the text is attributed to prominent anti-vaccine campaigner Robert F. Kennedy Jr, a near-identical post has been pinned on “German naturopath Anette Lillinger”. Contacted by AFP Fact Check, Lillinger said she did not write the text.

A similar article claimed Microsoft founder Bill Gates -- whose eponymous foundation has ploughed hundreds of millions of dollars into fighting the pandemic -- admitted that the vaccine “will change our DNA”.

How do Covid-19 vaccines work?

The posts refer to messenger ribonucleic acid (mRNA) vaccines, the type created by BioNTech and Pfizer that was rolled out in Britain starting December 8, 2020. Another vaccine, by Moderna, uses the same technology and is set for emergency approval in the US along with the BioNTech-Pfizer jab.

Traditional vaccines involve injecting small amounts of a weakened virus to train the body to recognise certain proteins, called antigens, so it is ready to attack if it encounters the real thing.

By contrast, mRNA vaccines deliver genetic instructions to build these proteins directly into the cells, effectively turning the body into a vaccine-making factory.

However, mRNA vaccines do not change a person’s DNA.

“They do not manipulate human DNA,” said Jeannette Dabanch Peña, infectious diseases professor of the University of Chile.

“They are only designed to express certain proteins so our body can identify them and produce the necessary defences. This is what a virus does naturally and it does not manipulate our genes,” she told AFP Fact Check.

The coordinator for the Gates Foundation's Covid-19 response in Africa, Solomon Zewdu, told AFP in an interview the claims had no scientific basis.

“It does not change DNA and Bill (Gates, editor’s note) for one has not admitted anything actually saying that it's going to be changing DNA,” he said.

Furthermore, the process of translating genetic code into the coronavirus’ protein is carried out in the cytoplasm, not in the nucleus of the cell where DNA is located, said María Victoria Sánchez, a researcher at Argentina’s Cuyo Institute of Experimental Medicine and Biology.

“Messenger RNA cannot ‘get into’ our DNA,” she said.

‘Cannot be made into DNA’

“There is no doubt that after a very short period of time, after it has created antigens (proteins, editor’s note) which in turn lead to antibodies, the RNA from the vaccine is destroyed”.

Kenneth Witwer, professor of molecular and comparative pathobiology at Johns Hopkins University, agreed. “mRNA is simply translated into protein, is quickly degraded, and cannot be made into DNA,” he said.

AFP Fact Check has debunked several cases of misinformation around Covid-19 vaccines, including photos purportedly showing forced vaccinations and claims that the jab contains “little computers” or that it will kill or permanently injure hundreds of thousands of people.