These photos show people being vaccinated against diphtheria in Peru

A collage of three photos has been shared hundreds of times on Facebook alongside a claim that it shows Peruvian authorities administering "forced" vaccinations. The images circulated online in November 2020, as countries around the world raced to procure Covid-19 vaccines. The claim is false; the photos show doctors, accompanied by military personnel, vaccinating people against diphtheria in Peru.

The photo collage was published on Facebook on November 22, 2020, here. It has been shared almost 150 times. 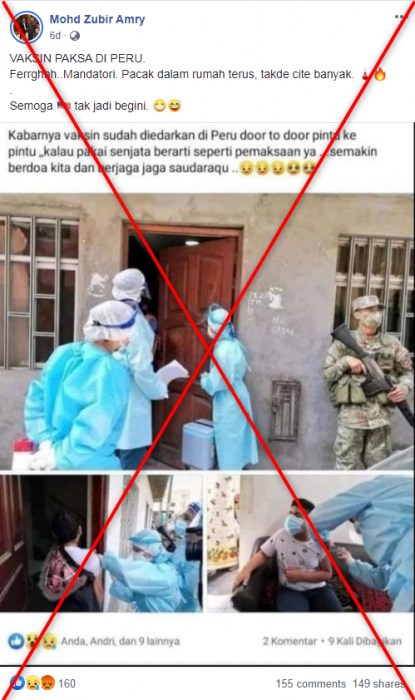 The Indonesian-language text on the photo says: “It is said the vaccine has been distributed door to door in Peru..  ,, if they carried weapons, it meant it was force… let’s pray more and take care, my brothers and sisters…”

The photo collage has been shared more than 100 times after it appeared with a similar claim on Facebook here, here and here.

A reverse image search on Google found the photos were posted on the official Facebook account of the Peruvian Health Ministry here on October 28, 2020.

The Spanish-language caption translates to English as: “This morning, 50 Minsa brigades conduct home-to-home assessment and vaccination actions in the Manzanilla area, in La Victoria, where a case of diphtheria was recorded. Specialists moved to identify unvaccinated people and suspected cases of the disease.”

Minsa is the acronym for Ministerio de Salud del Perú, or the Health Ministry of Peru.

Manzanilla is located within La Victoria district in the Peruvian capital of Lima.

Two of the same pictures were also uploaded to the ministry’s official Twitter account here on the same day. 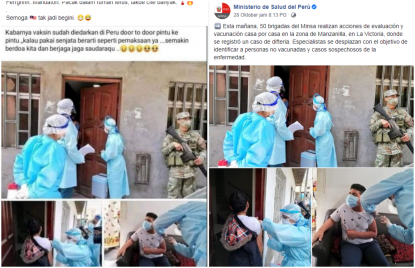 Minsa launched a national epidemiological alert on October 27, 2020, and started a vaccination campaign on the following day after a five-year-old girl from Lima was infected with diphtheria – Peru’s first case in 20 years.

According to this AFP report and testimonies of AFP photographers working at the scene, the military personnel accompanied the medical teams to prevent crowding and the further spread of Covid-19. 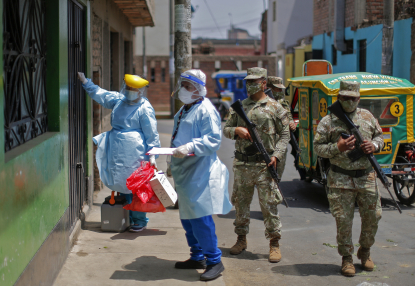 A health worker knocks the door of a house next to soldiers during a vaccination campaign against diphtheria in Lima, Peru, on October 28, 2020. (AFP / Luka Gonzales)

A press statement issued by Minsa on October 28, 2020, explains the diphtheria vaccination campaign “had the support of the Armed Forces and the National Police of Peru, who guaranteed security measures for prompt and effective health care”.

A keyword search on Google found no media reports of people being arrested during the vaccination drive against diphtheria in Peru.

In a press statement published by Minsa on October 22, 2020, Health Minister Pilar Mazzetti said that “vaccines against the SARS-CoV-2 virus are not mandatory and that people will have the power to decide – when the time comes.”