A video has been shared thousands of times on Facebook with claims that after initially calling the US election for Joe Biden, American TV network CNN had back-pedalled and was now saying President Donald Trump would win a second term. This is misleading; the video uses a clip from CNN anchor Fareed Zarakia predating the election in which he simply laid out a hypothetical way that Trump could win.

A Facebook post published on November 29, 2020 and shared more than 2,800 times claims: “THE SAME CNN THAT PROJECTED BIDEN A WINNER THE SAME CNN IS NOW SAYING THAT TRUMP WILL WIN! SO IF GOD SAYS IT WHO CAN COME AGAINST IT”. 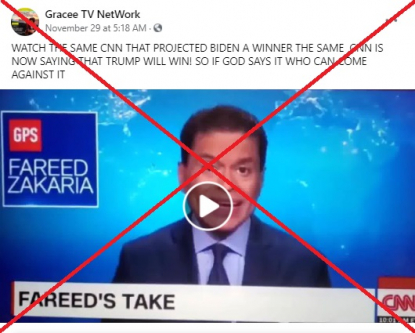 A screenshot taken on December 3, 2020, showing the misleading post

It is accompanied by a video in which we see someone shakily filming a screen on which CNN anchor Fareed Zakaria’s CNN show, called GPS, is paused.

The show is then unpaused to play a short clip in which Zakaria lays out a scenario that would lead to a Trump win.

The same video has been shared alongside similar claims here, here, and here.

CNN did not say Trump will win a second term

On November 7, 2020, CNN projected former US vice-president Joe Biden as the winner of the presidential race after he secured 306 electoral votes. He needed 270 to win.

Since then, and to date, CNN has referred to Biden as the president-elect.

AFP Fact Check traced the original video to Zakaria’s Facebook page, where it was uploaded on September 27, 2020 -- more than a month before the election.

The clip shared on Facebook, which cuts out about two minutes of Zakaria's analysis, left out important context and was shared without specifying that it was more than two months old.

What did Zakaria say?

At no point in the original, five-minute video did Zakaria assert that Trump would win.

Rather, he said “imagine the scenario during election week”, making it clear to viewers that he was painting a hypothetical situation. 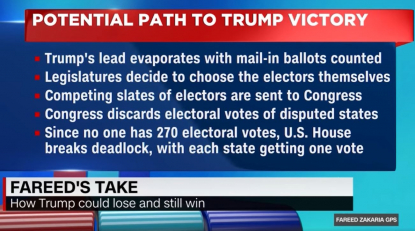 Zakaria’s hypothetical scenario was this: In states that Biden won with close margins thanks to mail-in votes -- which then become the focus of lawsuits -- Republican-majority state legislatures could decide to choose Republican electors, which are individuals that cast the final electoral votes that decide the presidency.

Democrats could oppose the move and in states with Democrat leaders, they might present their own electors. This confusion could then lead the nation’s Congress to contest the electors’ legitimacy and decide disputed states not be counted, leading to a situation where the US House of Representatives would vote on the president, with each state getting one vote.

However, this scenario -- which law experts deemed far-fetched from the start -- has not come to pass. Following the election, Republican leaders in four critical states won by Biden quashed any doubts as to whether they would try to flip their states’ electors. And with only days to go until the December 8, 2020 deadline for assigning electors, there has been no indication of this changing.

Trump is still refusing to concede defeat in the election, but the transition process to a Biden administration has begun.