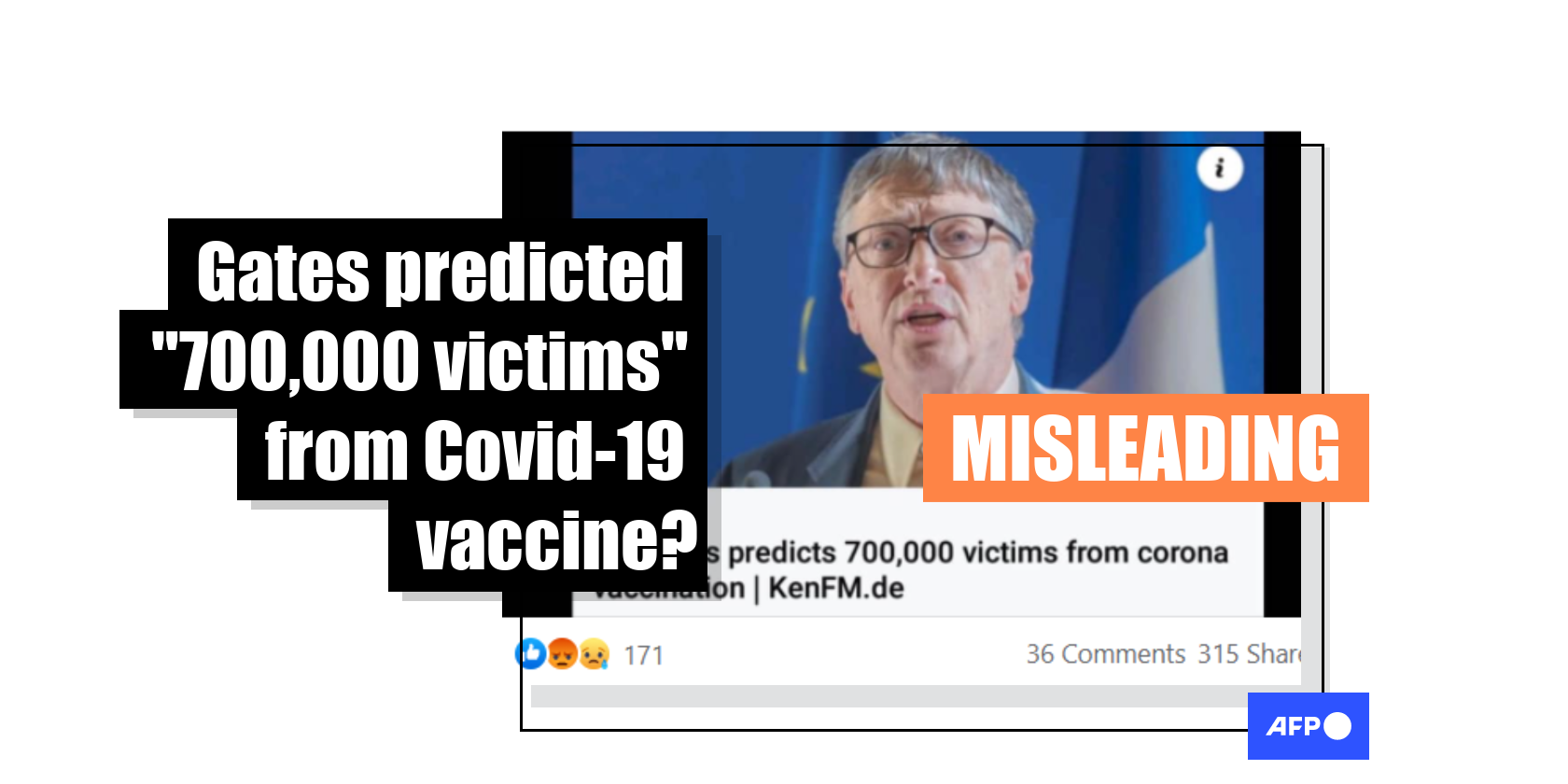 Bill Gates was talking about side effects and did not say 700,000 people would be killed or permanently disabled by a Covid-19 vaccine

An article shared thousands of times on Facebook claimed that Microsoft founder Bill Gates said there will be 700,000 “victims” of death or disability from a Covid-19 vaccine. This claim is misleading; in an interview earlier this year, Gates said the side effects of a vaccine potentially could affect up to 700,000 people. But at no point did he say these side effects would be fatal or cause permanent damage.

The article, which has been shared more than 19,000 times on Facebook, according to social media analysis tool CrowdTangle, claims that Bill Gates, who is co-chair of the Bill & Melinda Gates Foundation, “predicts 700,000 victims from corona[virus] vaccination”. Published here by KenFM, a German website known for “alternative viewpoints”, the article alleges that Gates said 8,300 people will be killed or permanently disabled by the vaccine in Germany alone.

“According to Gates, that would be 8,300 corona vaccination victims for Germany with its 83 million inhabitants. He calls this – death or permanent disability – ‘side effects,’” the article reads. 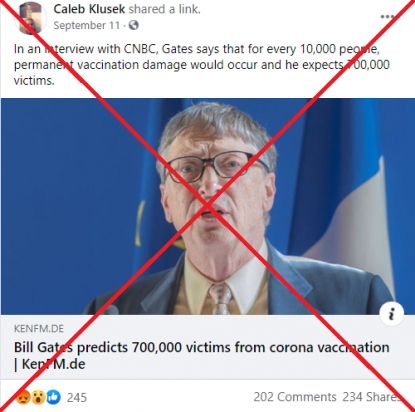 A screenshot taken on November 27, 2020 showing the false post

A Facebook post shared hundreds of times alongside a screenshot of the KenFM article also claimed that Gates said there will be “permanent vaccination damage” and the world can expect as many as 700,000 victims.

The 700,000 figure cited in the KenFM article and the Facebook post comes from an interview Gates gave to CNBC, specifically a section where the billionaire discusses vaccination side effects.

What Gates said about a Covid-19 vaccine

To start, Gates did not say a vaccine would kill or permanently disable 700,000 people.

In the CNBC interview, he explained that a side effect of a vaccine experienced by, say, one in 10,000 people would mean the potential to affect 700,000 worldwide.

Furthermore, Gates made no suggestion that the side effects would be adverse and result in permanent damage, as claimed in the article and on Facebook.

Gates had told CNBC that the “efficacy of vaccines in older people is always a huge challenge,” but in this case, he said the world “clearly needs a vaccine that works in the upper age range because they are most at risk” of dying from Covid-19. He said this must be done “so you don’t have side effects”.

“If we have one in 10,000 side effects, that’s way more -- 700,000 people -- who will suffer from that. So, really understanding the safety at gigantic scale across all age ranges, you know: pregnant, male, female, undernourished, existing comorbidities. It's very, very hard, and that actual decision of 'OK, let's go and give this vaccine to the entire world', governments will have to be involved because there will be some risk and indemnification needed before that can be decided on,” Gates said.

There was also no mention of 8,300 “vaccination victims” of “death or permanent disability” in Germany throughout the 26-minute interview.

A shorter, four-minute clip of the interview by CNBC captured the actual context of the quotes misinterpreted by the German website and mentioned in the misleading Facebook post.

Notably, the interview with Gates was published on April 9, 2020 -- months before any medical research companies had released preliminary efficacy results of the various vaccine trials that have now led to a batch of promising candidates.

The race to develop a Covid-19 vaccine is heating up as several vaccine makers worldwide have published preliminary data showing efficacy rates of 90 percent and higher.

AstraZeneca and Oxford University more recently announced their drug had proved, on average, 70 percent effective at stopping the virus after testing it on 23,000 people.

As reported by AFP, Russia said its Sputnik V coronavirus vaccine was 95 percent effective, although the number of cases used to make the calculation was not disclosed.

Side effects vs adverse effects

Pfizer, for its part, said none of the 43,000 participants enrolled in its vaccine trial had suffered any adverse side effects. Less than four percent of those vaccinated showed side effects in the form of fatigue and headaches.

According to the World Health Organization (WHO), side effects are “unintended effects occurring at normal dose related to the pharmacological properties”. Adverse reactions are “a response to a drug which is noxious and unintended, and which occurs at doses normally used in man for the prophylaxis, diagnosis, or therapy of disease, or for the modifications of physiological function”.

The UK National Health Service (NHS) advises that “all medicines can cause side effects, particularly if you don't use them as advised”.

“Side effects can range from mild, such as drowsiness or feeling sick (nausea), to life-threatening conditions, although these are rare. The risk of getting side effects varies from person to person,” NHS explains.

The US Centers for Disease Control and Prevention (CDC) also explain that an “adverse event” is “any health problem that happens after a shot or other vaccine. An adverse event might be truly caused by a vaccine, or it might be pure coincidence”.

Volunteers who took Covid-19 jabs from Moderna and Pfizer have discussed the effects of the vaccine shots. According to Science Magazine, “fewer than 2% of recipients of the Pfizer and Moderna vaccines developed severe fevers of 39°C to 40°C”.