This video shows a protest in South Africa, not Bobi Wine supporters in the UK

A video viewed thousands of times has been shared in Facebook posts claiming to show UK-based supporters of Ugandan presidential candidate Bobi Wine being dispersed by police while demonstrating outside their country’s embassy. The claim is false; the people in the video are members of South Africa’s Economic Freedom Fighters (EFF) political party, who were marching against alleged racism at a Cape Town school where a whites-only dance party was allegedly organised.

On November 20, 2020, this Facebook post shared a video showing a group of demonstrators being dispersed by police with a water cannon and tear gas. The post claimed that the protesters were supporters of Uganda’s opposition leader Bobi Wine in the UK.

“The like minded #NUP_Hooligans abroad carried their stupidity mbu (that) to demonstrate around the Ugandan Embassy in the UK. But hihii.. the tear gas was even coloured and better spiced than the Ugandan one (sic),” reads the Facebook post in part. 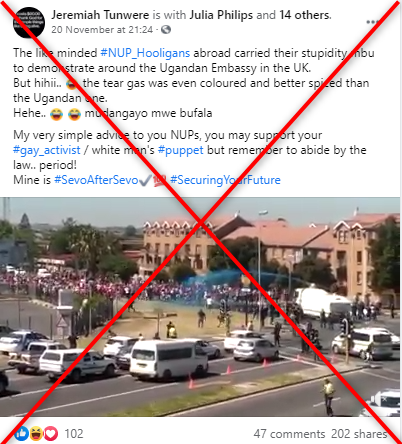 The same claim was shared here and here.

On November 20, 2020, there were media reports (here and here) about protests held by members of the EFF at Brackenfell High School against alleged racial discrimination after a “whites-only graduation party” was allegedly organised in October.

During the protest, police dispersed the crowd using water cannons and tear gas and pictures captured by AFP allowed AFP Fact Check to spot the exact location where the video was recorded. The site of the drama was also caught on film during a report by local news channel, eNCA.

From the recording on Facebook, the running battles with the police took place at a junction in front of brown apartments, across the road from a billboard with  “Kilimanjaro” on it. 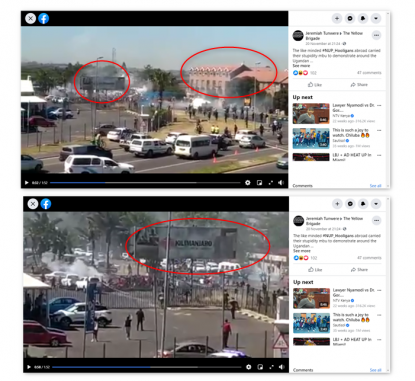 A screenshot of the false Facebook post showing the junction close to the brown buildings and a billboard, taken on November 27, 2020

Going through pictures taken by AFP, we spotted the brown buildings and the Kilimanjaro billboard in two separate images.

A screenshot of AFP photos separately showing the brown buildings and billboard from the protest video, taken on November 27, 2020 (RODGER BOSCH)

The captions on the images taken by AFP photographer Rodger Bosch read: “South African Police spray a water cannon towards members of the Economic Freedom Fighters (EFF) during a demonstration against alleged racism near Brackenfell High School, where a whites-only year-end dance party was allegedly organised last month, in Cape Town, on November 20, 2020.”

We also spotted a mall called Bracken Manor in another AFP photograph from the same series of shots taken on the day of the protest. 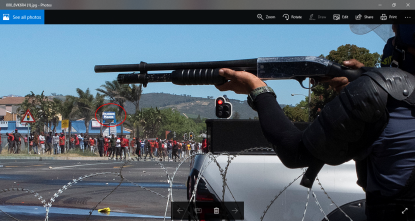 On Google Maps, we geolocated the mall to Paradys Street in Brackenfell, a northern suburb town in the Western Cape’s capital of Cape Town where the high school is located.

This location also resembles the site of a live broadcast of the protest by eNCA. According to their report, police officers had cordoned off the area to Brackenfell High School, where protesters were aiming to march.

On Google Maps, Bracken Manor is about 800 metres from Brackenfell High School.

Additionally, while there is no proof in the media of protests that were held in the UK over Wine’s arrest, we located Uganda’s High Commission in the UK on Google Maps and the surroundings have no similarities to the video on Facebook.

Last week, there were violent protests in Uganda following Bobi Wine's arrest. At least 37 people were reported dead during the protests pushing for the release of the pop star turned presidential candidate, who is seeking to unseat current President Yoweri Museveni in the January 2021 elections.