Skip to main content
A pro-democracy protester gives the three-finger salute during an anti-government rally outside the headquarters of the Siam Commercial Bank in Bangkok on November 25, 2020. (AFP / Jack Taylor)

As Thailand was rocked by five consecutive months of pro-democracy protests, a screenshot was shared in multiple Facebook posts that purported to show a tweet from Thai pro-democracy group Free Youth announcing details for an upcoming rally. The Twitter handle shown in the screenshot, however, was not from the group’s verified account. AFP also identified other fake Twitter accounts impersonating the pro-democracy group. In response, a co-founder of Free Youth clarified on November 25 that it only has one verified account through which it disseminates information regarding its activities; experts said the fake accounts may have been created to “discredit” the protesters.

The misleading screenshot was shared here on Facebook on November 25, 2020. 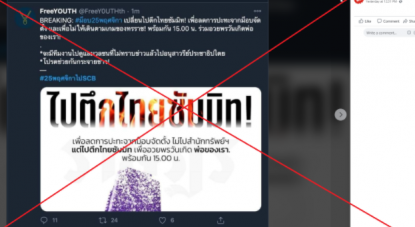 “Breaking: #Nov25Mob Change to Thai Summit Tower, to avoid clashing with the founding mob and to avoid playing the same game as the tyrants. Together at 3 PM.

Free Youth is a pro-democracy movement launched by students in Thailand. It is one of the main activist groups that has staged anti-government rallies in the country since July.

The protesters have called for an overhaul of the government, the rewriting of the 2017 military-scripted constitution and the reform of the monarchy.

Thanathorn Juangroongruangkit was an executive vice president of the Thai Summit Group, before quitting in 2018 to form a political party, Future Forward.

Royalists have accused him of supporting anti-government protesters, the Bangkok Post reported here.

Screenshots of the purported tweets were also shared here and here on Facebook. 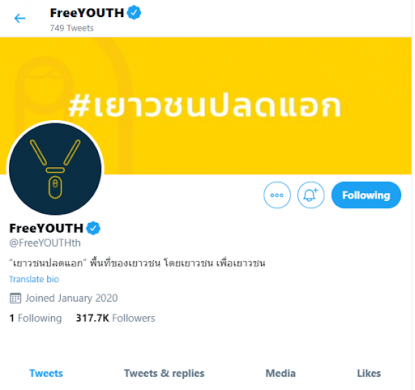 While both accounts show the same profile picture, the Twitter handle for the authentic account contains the letter “O”, instead of the number “0”.

Below is a comparison of the fake (L) and real (R) Twitter accounts, with differences circled in red by AFP: 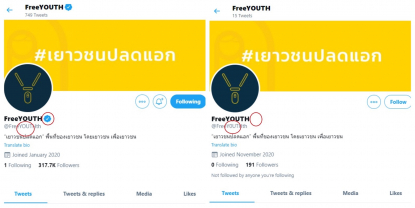 The Thai-language tweet reads: “Actually, this fake account does the graphics quite well. [I] really want to see the man's face.”

In an email to AFP on November 29, 2020, Lauren Myers-Cavanagh, Twitter's Asia-Pacific head of policy communications, confirmed that the "account was suspended for violation of the Twitter Rules against Impersonation."

Dr. Jessada Salathong, a professor at Chulalongkorn University’s Faculty of Mass Communications, said imposter accounts may aim to “create friction to the society” and “cause confusion and misunderstanding to the protesters”.

“In my opinion, the impersonators also aim to pull the people who are politically neutral to join their camps,” he told AFP by phone on November 27, 2020.

Pijitra Suppasawatgul, head of the Journalism and New Media Department at Chulalongkorn University, told AFP on November 27 by phone: “We are in a digital world where everyone can post and share anything. It has become easier for impersonators to discredit the opposite camp.”