Two photos of Myanmar’s civilian leader Aung San Suu Kyi have been shared thousands of times in multiple posts on Facebook alongside a claim they show her raising a three-fingered salute in support of Thai pro-democracy protesters. The claim is false; the photos actually show Suu Kyi meeting with Myanmar’s national scouts in 2019, almost one year before major pro-democracy protests began in Thailand.

The photos were published on Facebook here on October 24, 2020.

“It shows that she is a real activist for freedom, like students and the people in our country”. 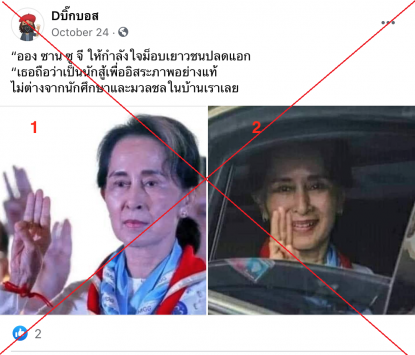 Since July 2020, Thailand has been rocked by youth-led protests demanding a redrafting of the constitution, reforms to the monarchy, and for the resignation of Prime Minister Prayut Chan-o-cha, AFP reported here.

The photos were also shared here, here and here on Facebook alongside a similar claim.

A reverse image search on Google followed by a keyword search found the original photo published by the European Pressphoto Agency (EPA) here on July 20, 2019. 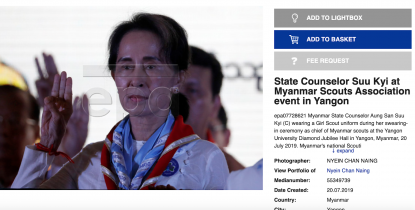 Below is a screenshot comparison of the image in the misleading Facebook post (L) and the EPA photo (R): 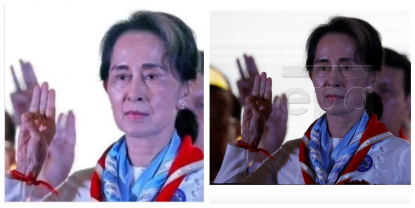 The same image was also published here in a report by the Myanmar Times on July 30, 2019.

The caption reads: “State Counsellor Daw Aung San Suu Kyi wears a Girl Scout uniform as she is sworn in as chief of the country’s scouts in Yangon on July 20.”

A reverse image search found the second photo published in August 2019 in this Facebook post by The Irrawaddy, a Myanmar news site.

Part of the post's Burmese-language caption translates to English as: “State Counsellor Daw Aung San Suu Kyi, arriving in Mandalay, attended a meeting with Burmese scouts at Mandalay City Hall on 16 August, and gave a speech.”

Below is a screenshot comparison of the image in the misleading Facebook post (L) and the Irrawaddy photo (R): 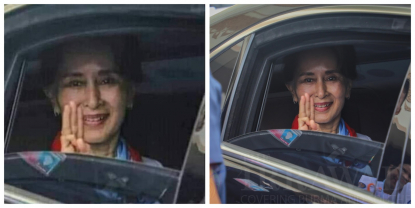 As of November 25 2020, Suu Kyi has not made any public comments on the recent protests in Thailand.