US doctor makes false claims about risk of Covid-19 vaccination

An American physician and anti-vaccination advocate claims in a video viewed more than 169,000 times that widely used Covid-19 vaccines have not been properly tested and pose long-term health risks. But experts say her claims are inaccurate, the technology used in the inoculations was under development well before the pandemic, the shots were trialed on tens of thousands of people, and the US Centers for Disease Control and Prevention says that long-term side effects are unlikely.

“Everyone who has any interest in the jab needs to watch this,” says text accompanying a video posted on Instagram on April 18, 2021. The clip features Dr Sherri Tenpenny, who is licensed as an osteopath in Ohio, talking about purported risks of Covid-19 inoculation.

The clip is an excerpt from an interview she gave to Daystar’s “Ministry Now” program, which was viewed more than 21,000 times on video hosting site BitChute. 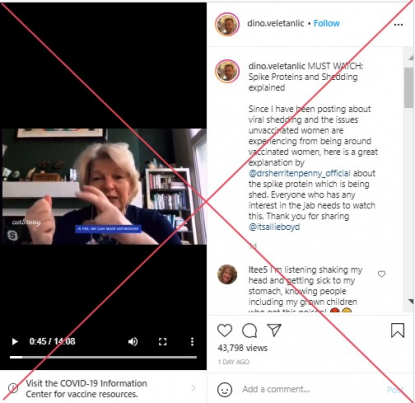 Similar claims by Tenpenny regularly appear on social media. Her website bills her as “doctor, speaker, educator, consultant,” with offers of “Unlimited Premium Podcast access” for $20 a month and also includes a prominent link for donations.

Even as the US reached the milestone of administering 200 million Covid-19 shots, disinformation about them has flourished.

Below, AFP Fact Check breaks down some of the claims made by Tenpenny in the Instagram video.

Claim: “That anti-spike antibody that’s supposed to be there to keep you from getting sick, actually, if you produce it in very high quantities, can have direct adverse effects on your tissues, primarily your lungs.”

Tenpenny adds that there are “zero long term studies on what’s going to happen down the road with this anti-spike antibody, what can happen with auto-immune diseases.”

She is referring to the Moderna and Pfizer-BioNTech vaccines which are the first using cutting-edge messenger ribonucleic acid (mRNA) technology to be authorized and distributed globally.

An mRNA vaccine differs from a regular shot in that, instead of confronting the immune system with part of a virus in a weakened or deactivated form to build antibodies, it introduces a “blueprint” of the spike protein -- part of the virus that the body can then recognize and fight when confronted by it later.

Tenpenny has made similar claims elsewhere online linking the shots to auto-immune diseases and lung damage.

But experts have told AFP that evidence does not support claims that auto-immune illnesses or lung damage are triggered by mRNA vaccines.

Roselyn Lemus-Martin, who has a doctorate in molecular cell biology from Oxford University and specializes in vaccines and treatment of Covid-19, said that there is “no scientific proof” showing the mRNA shots provoke auto-immune diseases and, on the contrary, the technology “could help as therapy” to treat them.

Thalia García Téllez, a researcher in infectious diseases and infectology at Cochin Hospital in Paris, said that auto-immune diseases can be “the consequence of one or several DNA mutations. The process by which these mutations appear has nothing to do with messenger RNA.”

Concerning the damage allegedly inflicted on the lungs by antibodies, Palma Rocchi, an mRNA specialist and research director at the National Institute of Health and Medical Research (Inserm) in Paris, said “that is not supported by data in the scientific literature.”

And Kate Mullane, a professor with University of Chicago Medicine, where she is director of infectious disease clinical trials, said: “The antibodies do not cause tissue damage.”

Claim: “The protein then can bind to your DNA and irreversibly change it.”

Alison Thompson, associate professor at the Leslie Dan Faculty of Pharmacy with the University of Toronto, said: “The technology does not reprogram our DNA.”

Similarly, María Victoria Sánchez, a researcher at the IMBECU-CCT-CONICET Immunology and Vaccine Development Laboratory in Argentina, said that the mRNA vaccines cannot penetrate a person’s genes.

“The process is carried out in the cytoplasm, not in the nucleus of the cell,” she said. “Messenger RNA cannot ‘get into’ our DNA.”

Claim: “It’s not FDA approved because remember they’ve tried, they've been doing this for almost 20 years. They couldn’t get it past safety studies and efficacy studies meaning it keeps people from getting sick. It’s completely experimental. They’ve never done this before.”

This is inaccurate. Studies have shown the mRNA vaccines are safe and effective.

In December, the US Food and Drug Administration (FDA) issued an emergency use authorization for the Pfizer-BioNTech shot, followed by similar action for Moderna’s mRNA vaccine as the pandemic’s economic and human toll mounted.

The authorizations were not an “approval” from the  FDA, but data supported the emergency allowance “because the vaccine’s known and potential benefits clearly outweigh its known and potential risks,” Peter Marks, director of the FDA’s Center for Biologics Evaluation and Research, said at the time.

More than 37,500 people participated in a study of the Pfizer-BioNTech vaccine and were followed for a median of two months after receiving the second dose, the FDA said.

“The most commonly reported side effects, which typically lasted several days, were pain at the injection site, tiredness, headache, muscle pain, chills, joint pain, and fever,” it said. A similar study was conducted for the Moderna vaccine with similar results.

The large-scale Phase 3 human trials of each vaccine began in July 2020. The first publication of results in November of that year showed a vaccine efficacy of around 95 percent.

In March, 2021 a Centers for Disease Control and Prevention (CDC) study reported “strong evidence” that the mRNA shots are highly effective in preventing SARS-CoV-2 infections among health care personnel, first responders, and other essential workers.

“Serious side effects that would cause a long-term health problem are extremely unlikely following Covid-19 vaccination,” the CDC says on its website.

University of Chicago’s Mullane said that these vaccines “are not new. There is long-term data on mRNA vaccines for influenza showing no long-term toxicity.”

Thompson, of the University of Toronto, said: “While the Pfizer and Moderna vaccines are indeed the first successful mRNA vaccines, the technology has been used for decades.”

Research on using mRNA technology for vaccines started in the early 1990s and included promising tests on animals.

More than 222 million Covid-19 vaccine doses have been administered in the United States, and the vast majority have been mRNA shots.

“The risk of Covid is far greater than risk of disease” from inoculation, said Mullane, adding that Tenpenny “is inappropriately interpreting data.”