A video of armoured vehicles has been viewed thousands of times in multiple social media posts in April 2021 which claim it shows Chinese troops in Myanmar, where there has been escalating unrest since a military coup on February 1, 2021. The claim is false: the video was actually filmed in China’s Yunnan province; the same video has circulated online since at least August 2019.

The tweet’s caption in traditional Chinese translates to English as: “Video shared online about Chinese Communist Party’s army arriving in Myanmar’s Muse town / The street is full of military vehicles.” 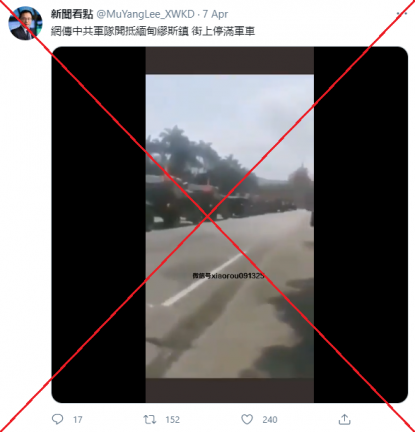 Muse is a town in Myanmar's northern Shan State.

Neighbouring China’s Yunnan province, the town has seen escalating unrest since Myanmar’s military coup on February 1, 2021, raising fears that people may try to cross into China if the violence intensifies, AFP has reported.

Assistance Association for Political Prisoners, a local monitoring group, said on March 30, 2021, that at least 520 people have been killed since the unrest in Myanmar began, AFP reported here.

The misleading posts circulated as Myanmar security forces continued a violent crack down on anti-coup protests, with some accusing China of waving through the generals' power grab and trading Myanmar's freedom for its own strategic gain, according to an AFP report here.

Some users linked the video directly to the 2021 coup in Myanmar. For example, one user left a comment in Chinese saying: “Openly interfering in the internal affairs of another country, Myanmar’s military government colluded with foreign force (Chinese Communist Party) to overthrow the elected government. Strongly condemn it”.

However, the claim is false: the video was filmed in China’s Yunnan province not the Burmese town of Muse; and it was taken at least a year before Myanmar’s military coup in February 2021.

A frame-by-frame analysis of the video identified a Chinese sign reading “Sanhe Business And Trade Plaza” from the video’s background.

This helped to identify that the video was actually filmed here on the Chinese side of the border on the Guomen Avenue of Ruili city (known as Shweli in Myanmar), in China’s Yunnan province, which is around 1.5 miles away from Myanmar’s border town Muse, according to Google Maps.

Below are three screenshot comparisons of the Twitter video (L) and the street views on Baidu Maps (R): The 2019 post does not specify what the footage shows.

There are no credible reports online about Chinese troops entering Myanmar.