These photos were taken after fuel vehicles exploded in Afghanistan

Multiple Facebook posts have shared photos they claim show a gas pipeline exploding in Myanmar. The posts began circulating online after anti-coup activists issued calls to damage gas pipelines connecting Myanmar and China, as they accuse Beijing of supporting the Burmese junta that seized power on February 1, 2021. But the claim is false. The images are actually screenshots of a Reuters video showing an explosion of fuel vehicles in Afghanistan. AFP found no credible reports of the purported explosion in Myanmar.

The photos were published in a Facebook post on February 20, 2021, which has since been shared more than 700 times. 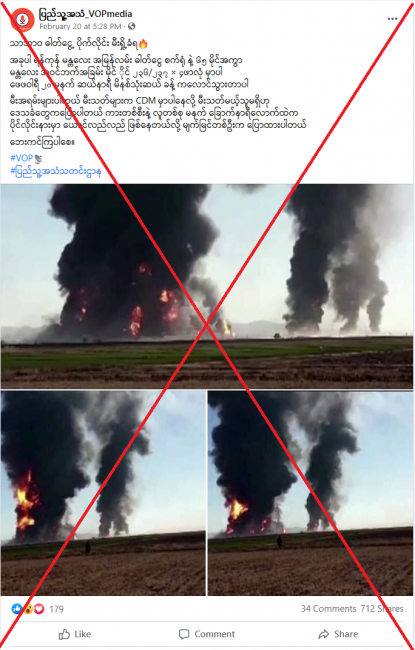 The title of Burmese-language post reads: “The natural gas pipeline set on fire ?”.

“Locals say that there was no one to put the fire out because firemen were joining the CDM [the Civil Disobedience Movement against the military coup]. An eyewitness said a car and a group of people had been wandering near the pipeline since at 6AM. Be safe.”

Mandalay is the second largest city in Myanmar.

The Sino-Myanmar oil and gas pipelines, which connect Kyaukpyu in Myanmar to Yunnan province in China, run across central Myanmar, including the Mandalay region.

Following a military coup in Myanmar on February 1, 2021, there have been calls from activists to attack the Sino-Myanmar gas pipeline, amid accusations of Chinese support for the junta that seized power and ousted democratically-elected leader Aung San Suu Kyi.

The photos were also shared alongside a similar claim here, here and here.

A reverse image search on Google found a video report by Reuters news agency about an explosion of fuel vehicles on the Iran-Afghanistan border on February 13, 2021.

The photos in the misleading Facebook posts are in fact screenshots taken from the video in the Reuters report. 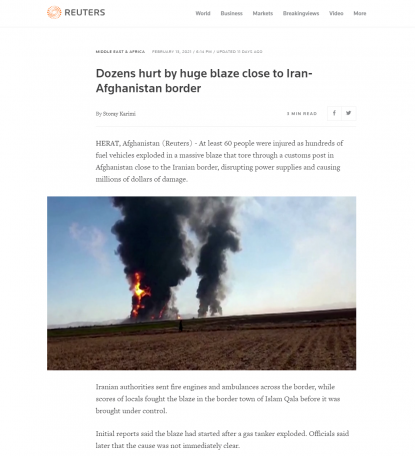 “At least 60 people were injured as hundreds of fuel vehicles exploded in a massive blaze that tore through a customs post in Afghanistan close to the Iranian border, disrupting power supplies and causing millions of dollars of damage,” it reads.

Below are screenshot comparisons of the photos in misleading posts (L) and the Reuters’ report (R): 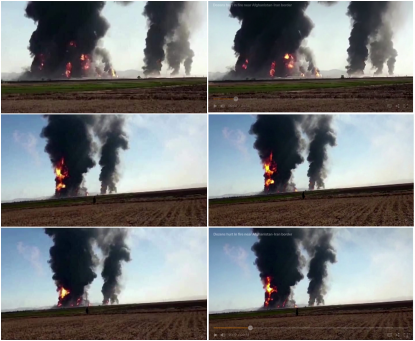 AFP found no credible reports of a gas pipeline explosion around Mandalay on February 20, 2021.