Facebook, Instagram and TikTok posts circulating in April 2021 share a video they claim shows French police throwing their handcuffs to the ground to protest coronavirus lockdowns. The claim is false: the footage actually shows officers protesting a perceived lack of support from the government over police brutality complaints in June 2020.

“French police declare they are no longer participating in the lockdown,” reads the text in this video, published on Instagram on April 7, 2021.

The post’s caption reads: “French police have the fortitude to join protesters. This bs world wide needs to stop. Step up cops. You’re one of us,” the caption reads.

The footage shows dozens of police officers in uniform standing side by side as they each throw a pair of handcuffs on the floor. 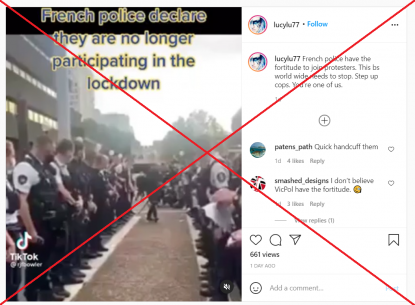 French President Emmanuel Macron announced on March 31 that schools would close and that a limited lockdown, in place in Paris and other regions, would be extended to the whole country to battle soaring Covid-19 cases.

Other instances of the video and misleading claim appear on Facebook here, here and here.

A Google search of the keywords "French police handcuffs" led AFP to June 2020 reports by the BBC and  Radio France Internationale on protests involving law enforcement against a claimed lack of support from the government over reports of police brutality.

"Handcuffs thrown to the ground in front of Bobigny police headquarters," the French-language tweet reads. "Angry police officers say they no longer have the means to carry out proper stops [in the street] after Castaner's announcement."

French police unions called for demonstrations after then-interior minister Christophe Castaner announced measures to tackle suspected racism and violence within the force, including a ban on the use of chokeholds.

The move came after mass protests around the world following the killing of George Floyd.

A further search on Facebook of "Bobigny", a commune in the northeast of Paris; and "menottes", the French word for handcuffs, led AFP to this livestream published on June 21, 2020 by French online media outlet Brut. 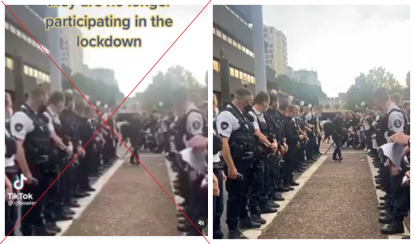 "We're live from in front of Bobigny police headquarters," the journalist says. "There are around 100 to 150 police officers here."

"They've come to take off their police armbands and handcuffs in a symbolic gesture of their opposition to Christophe Castaner's remarks earlier this week."