Facebook and Instagram posts purport to show a video of an elderly man who was arrested for not wearing a facemask, despite allegedly being vaccinated against Covid-19. The claim is misleading: the man was arrested for breaching coronavirus restrictions at a demonstration in support of WikiLeaks founder Julian Assange in London in January 2021. Health authorities recommend wearing masks and social distancing even for people who have been fully vaccinated.

“UK. First it was 2 weeks to flatten the curve, then wear a mask to save Grandpa, then wait till the vaccine, well now all of a sudden Grandpa is Vaccinated and getting arrested for not wearing a mask. This was never about a virus, time to RISE,” the caption reads. 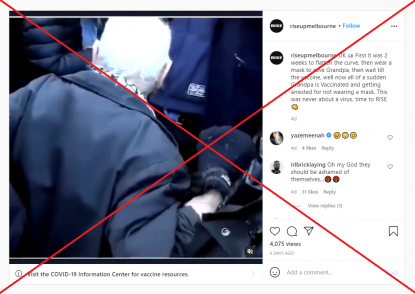 The footage was also shared here and here in April 2021 alongside similar claims.

However, posts are misleading.

A further search on YouTube of the terms “92-year-old arrested Assange” led AFP to this Youtube video posted by news agency Storyful on January 6, 2021, which is a longer version of the video in the misleading social media posts.

“An elderly man was among seven people detained for breaching coronavirus restrictions outside a London court on Wednesday, January 6, as WikiLeaks founder Julian Assange was denied bail,” the video’s description reads.

“A crowd of Assange’s supporters reacted strongly when a 92-year-old man, identified as Eric Levy by Amnesty media manager Stefan Simanowitz, was arrested and taken away.”

While footage of Levy’s arrest show he was not wearing a facemask, there is no indication that his detention was related to whether or not he had received a Covid-19 jab.

Health authorities recommend taking precautions such as wearing masks and social distancing even for people who have been fully vaccinated.

London’s Metropolitan Police said they detained 7 people at the protest, on the day Assange was denied bail, pending an US appeal against a block of his extradition which would see him face charges there, as AFP reported here.