A video has been viewed tens of thousands of times in YouTube, Facebook and blog posts that claim a research organisation has “confirmed” Philippine Vice President Leni Robredo received zero votes in the country's Mindanao island. Social media users took this claim to mean Robredo got zero votes in Mindanao in the 2016 elections. But the claim is misleading; the research firm that conducted the survey assessed voter preferences for the 2022 national elections; it did not ask about the 2016 elections.

The video shows presidential legal counsel Salvador Panelo discussing the results of a voter preference survey for the 2022 national elections.

Vice President Leni Robredo, who currently leads the political opposition in the Philippines, is among the potential 2022 candidates listed in the survey. 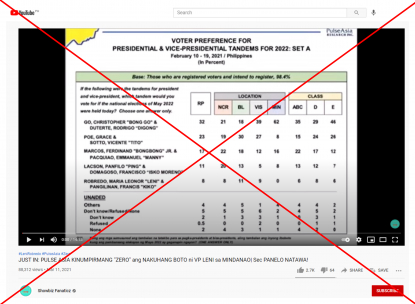 A screenshot of the misleading post, taken on April 8, 2020

Comments to the post indicate people believed the survey pertained to the results of the 2016 election.

One wrote: "This also confirms (Ferdinand Marcos Jr) is the real winner for the VP election in Mindanao. Supreme Court are you not bothered that you made a wrong decision?”

Marcos Jr had accused Robredo of electoral fraud, but a recount in tightly contested areas gave her a bigger lead, AFP reported.

An identical video was also shared alongside a similar claim on Facebook here and here; and in this blog post.

Keyword searches on Google found the video corresponds to a longer video streamed live March 10, 2021 on the Facebook account of the Philippine presidential communications agency.

He appears to mock Robredo for her survey performance in Mindanao island, where she is seen with a zero score.

Nowhere in the video does Panelo mention that Pulse Asia confirmed Robredo received zero votes in Mindanao during the 2016 polls.

Pulse Asia told AFP the survey is authentic, but denied it is about the 2016 elections as the misleading posts allege.

In a phone interview on April 7, 2021, Pulse Asia chair Ronald Holmes said: “We don’t have anything in the survey that really would probe into what (the respondent’s) perception of the 2016 elections are.”

“The survey is a commissioned survey. It was conducted this year.”

Reports published in 2016 by media organisations Inquirer.net and GMA News Online also indicate Robredo did not get zero votes in Mindanao.