Skip to main content
An elderly woman shows her finger after casting her vote outside a polling station during the state legislative elections, at South Twenty Four Parganas district, about 70 km from Kolkata on April 6, 2021. (Photo by DIBYANGSHU SARKAR / AFP)

A video has been viewed hundreds of thousands of times in Facebook and Twitter posts that claim it shows an Indian politician “threatening mothers and sisters of West Bengal” amid ongoing elections in the state. But these posts omit important context: the video has been shortened from longer footage that shows the politician mentioning the phrase “mothers and sisters” to urge voters to support her party which promotes the safety of women.

It shows politician Koushani Mukherjee telling a crowd in the Bangla language: “Hey, are you from BJP? Everyone has mothers and sisters at home, think before you vote.” 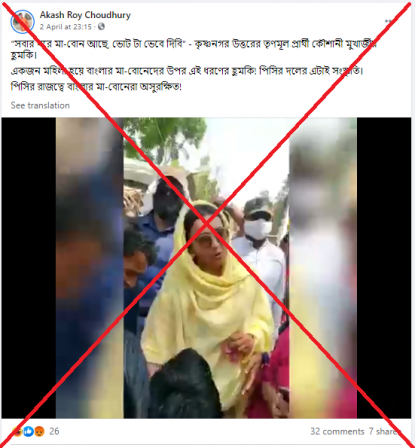 Screenshot of the misleading post, taken and crossed by AFP on April 7, 2021

The post circulated online amid ongoing legislative elections in the eastern state of West Bengal.

Verified Facebook pages of the BJP also posted the video here and here, where it has been viewed hundreds of thousands of times.

But these posts omit important context.

A reverse image search of the video’s keyframes extracted using InVID-WeVerify, a digital verification tool, found it corresponds to a portion of a longer video posted on Facebook on April 3, 2021.

The excluded portion shows Mukherjee mentioned the phrase “mothers and sisters” to try to convince voters that her party promotes the safety of women.

Her entire remarks in full states: “Hey, come here. Are you from the BJP? Everyone has mothers and sisters at home, think before you vote. Think about the safety of women. Mothers and sisters will not be safe in Bengal if Didi is not here.”

Below is a screenshot comparison of the video in the misleading posts (L) and the longer video (R): 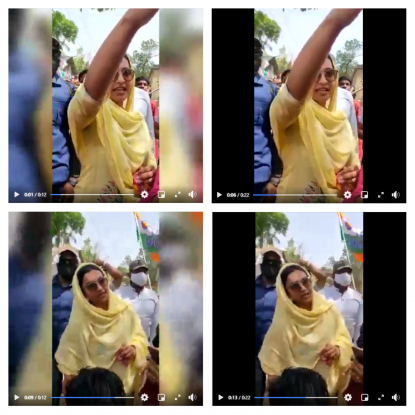 Responding to the misleading posts, she said in a Facebook video on April 2, 2021: “The BJP IT cell is circulating only one sentence from what I said. What I actually said to the people to think of women safety before they vote, because if BJP comes to power in Bengal, women won't be safe here. So think before you vote, and don't fall into the BJP’s traps.”