As Chinese celebrities cut ties with brands after they pledged to stop sourcing cotton from Xinjiang over alleged human rights abuses in the region, a photo collage has emerged in social media posts that claim it shows ten Hong Kong celebrities holding banners with the message: “I wear Xinjiang cotton”. The claim is false: the images have been doctored from a social media campaign in 2016 to support local firefighters.

The photo collage appears to show ten Hong Kong celebrities holding up a banner with the message “I wear Xinjiang cotton”.

Below the pictures, the slogan: “We Support Xinjiang Mian Hua” appears in red.

“Mian Hua” is Chinese pinyin for the word “cotton”, and features the letters “H” and “M” in the style of H&M clothing brand. 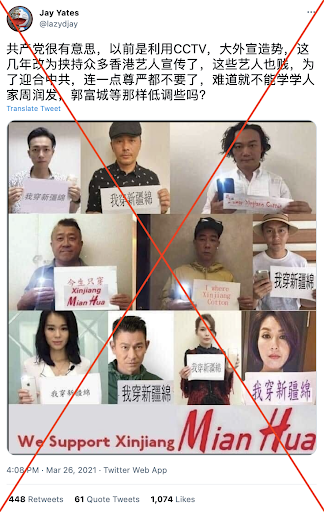 Clothing brands such as H&M and Nike have been hit with boycotts from celebrities and tech firms in China after they pledged to stop sourcing cotton from Xinjiang, following reports of human rights abuses in the region.

Rights groups say at least one million Uyghurs and other mostly Muslim minorities have been incarcerated in camps in Xinjiang, where authorities are also accused of forcibly sterilising women and imposing forced labour.

Beijing has strongly denied the allegations and says training programmes, work schemes and better education have helped stamp out extremism in the region.

The same image has circulated widely on social media, including on Facebook, Twitter, and blogs here and here.

However, the pictures in the social media posts apparently supporting Xinjiang cottom have been altered.

A reverse image search on Google traced seven of the 10 celebrity images in the photo collage to a campaign supporting firefighters in Hong Kong.

The pictures of Tsang, Lau, Chan, Chan Siu-chun, Cheung, Wu and Leung holding banners unrelated to Xinjiang appear in this video published on June 29, 2016 on the YouTube channel of Hong Kong broadcaster The Television Broadcasts Limited.

The papers they are holding in fact read “Tributes to all frontline firefighters” in Chinese. 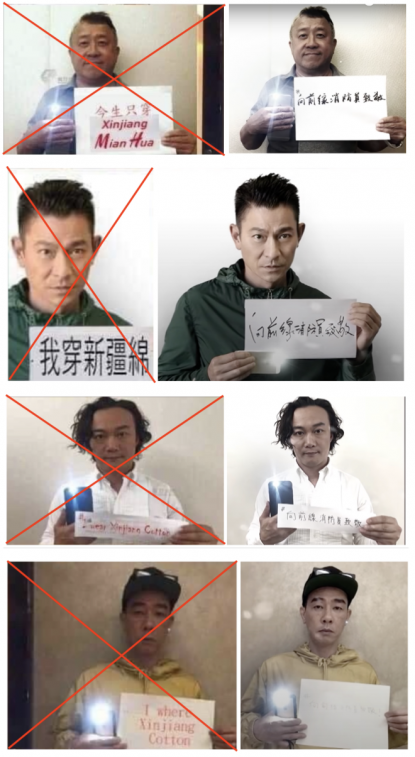 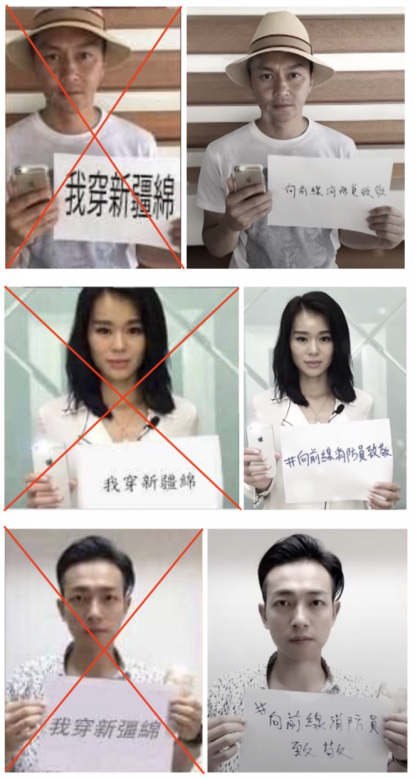 The video, called “The True Hero - Salute To Our Firefighters”, was created as part of an online vigil organised by a group of artists and broadcasting companies to honour two firefighters who lost their lives in a blaze in the Hong Kong district of Ngau Tau Kok in 2016.

The papers they are holding also read  “Tributes to all frontline firefighters”.

Screenshots comparison of the images from the misleading post and the photos from Weibo, Facebook and Ming Pao’s article.

The word “Mian Hua” was taken from a photo published here on Weibo under the official account of Chinese state-run newspaper People’s Daily on March 24, 2021. Below is a screenshot comparison of the phase written under the photo collage (L) and the photo from People’s Daily (R):

A screenshot comparison of the phase written under the photo collage and the photo from People’s Daily.